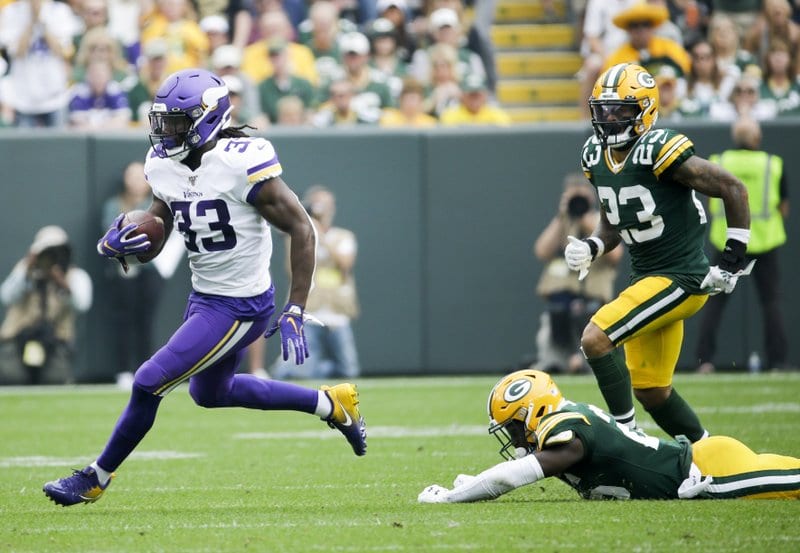 This is part two of a series of articles, to read part one, click here

After getting clear on their vision for the offense and anointing a quarterback for the next three to five years, Vikings General Manager Rick Spielman and Executive Vice President of Football Operations Rob Brzezinski must figure out the backfield.

Dalvin Cook has been absolutely electric in the opportunities he has been given, but his injury concerns coupled with a league wide movement to shy away from paying big money to running backs pose a question as to what his future on the Minnesota Vikings looks like.

At first it seems unfathomable to let Cook walk in the offseason or attempt a trade, but what if that’s what is best for the team? Do they want to tie up $15+ million a year to a recently injury prone running back given their current lack of cap space?

What is their vision for Dalvin Cook and the rest of the backfield after this season?

But that is the key phrase when discussing Dalvin Cook: “when healthy”. He has played only 29 games in his three-year career, tearing his ACL in week 4 of his rookie year and fighting through the majority of his second year with lingering hamstring issues.

On one hand, the league as a whole seems to be figuring out that spending money on an offensive line rather than a star running back seems to be a key to success. More and more teams are forgoing tying up money to talented yet injury prone players and spending that money elsewhere. This year, the 49ers proved that blocking is the most important aspect of the running game, as three different running backs succeeded in their system.

On the other hand, Kirk Cousins plays his best when the play action is working, and if the Vikings commit to Cousins, they must maximize his strengths. In games last year when Dalvin Cook had over 100 total yards from scrimmage, Cousins averaged a 111-passer rating. When Cook failed to get 100 total yards, Cousins averaged a 102-passer rating. Not a massive difference in performance, but clearly Cousins plays the best when the run game is working, and what better player to have in the backfield than an elite running back?

Not to mention, Cook’s injury concerns may very well be overblown. During his three-year career at Florida State, he played in 38 of 40 possible games. After tearing his ACL his rookie year with the Vikings, he suffered from lingering hamstring issues during his sophomore campaign, which is an extremely common issue for players recovering from an ACL injury. If not for tearing his ACL that fateful day against the Lions, “Dalvin Cook” and “injury prone” may have never been included in the same sentence.

Rick Spielman and Rob Brzezinski have a tough decision on their hands in deciding on the identity of the backfield and the running game as a whole. Do they extend Dalvin Cook and maximize the strengths of Kirk Cousins?

Or do they let Cook walk next offseason, spend money elsewhere on the roster, and roll with the cheaper but slightly less talented option in Alexander Mattison?