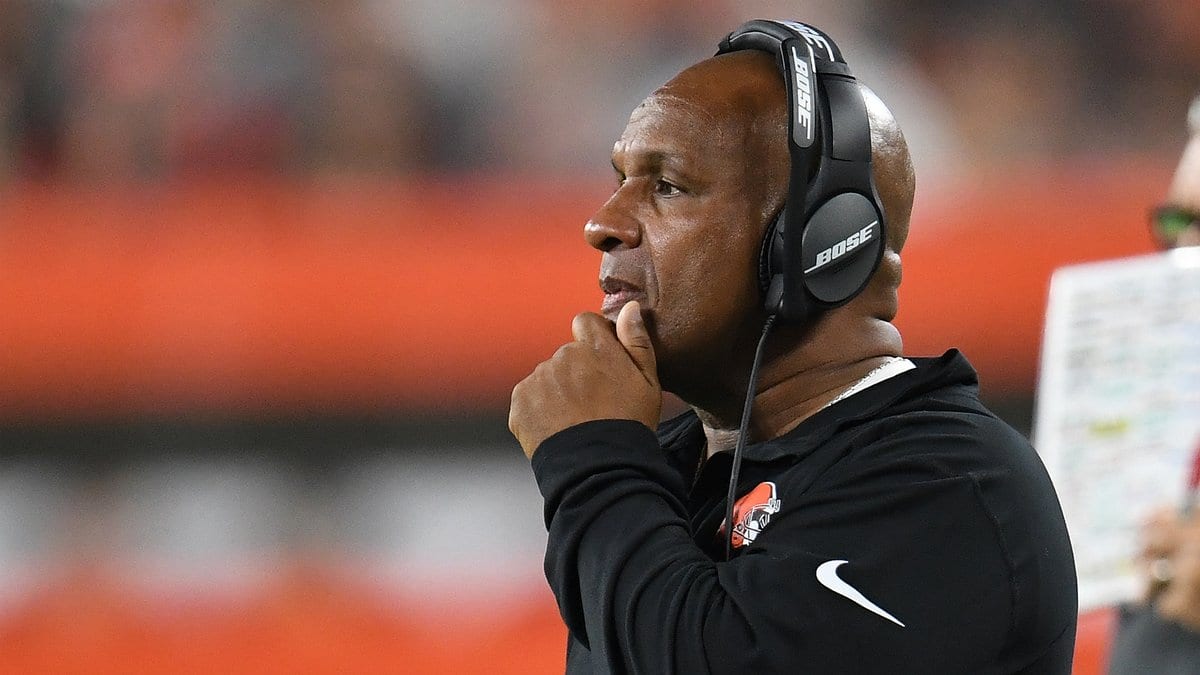 Hue Jackson is best known by NFL fans for his tenure as Head Coach of the Cleveland Browns, who went 3-36-1 in three years, including a 1-win season in 2016 and historically disastrous winless season in 2017. He was then embroiled in a highly publicized power struggle with his Offensive Coordinator Todd Haley, which got both of them fired after a 2-5-1 start in 2018. Since then, Interim Head Coach Gregg Williams led that very same Browns team to five wins in the last 8 games of the season. Williams eclipsed Jackson’s win total over the past 3 years after just 6 weeks, beating the Falcons, Bengals, Panthers, and Broncos during that stretch. So, when former Head Coach Marvin Lewis brought Jackson onto the Cincinnati Bengals coaching staff mid-season, fans asked, “why?”  Surely, there could be someone better out there. As fate would have it, the Bengals finished the 2018 season with a record of 1-6 after they hired Jackson as an assistant to the Head Coach. Now that news has broken that the Minnesota Vikings are considering Hue Jackson for a position as their new Offensive Coordinator after spending the past three years as inarguably the worst coach in football, fans are again asking, “WHY?!”

Vikings fans should not just laugh off Hue Jackson’s interview with the franchise as a futile attempt at a job. He could land the position, a proposition that requires a look at Jackson’s career prior to 2016. Jackson was first hired as an Offensive Coordinator with the Oakland Raiders in 2010. This hiring came after a two-year stint as Quarterbacks Coach for the Baltimore Ravens, where he was credited for developing then Rookie-of-the-Year Quarterback Joe Flacco. As Offensive Coordinator, Jackson commanded the Raiders offense to an average of 25.6 points per game, ending the 2010 season as the 6th best offense in the league. Quarterback Jason Campbell had one of his best seasons in 12 starts with Oakland that year, with career highs in touchdown percentage (4% of his passes were scores), yards per passing attempt (7.3), and yards per completion (12.3). Running Back Darren McFadden also had a great year in Oakland, with his own career highs in rushing yardage (1157 yards on the season), rushing touchdowns (7), rushing yards per game (89), receptions (47), receiving yards (507), receiving touchdowns (3), and yards per touch (6.2) – finishing the year as one of the league’s best running backs.

Hue Jackson was promoted to Head Coach of the Raiders in 2011, but was promptly fired after his first season, after the Raiders missed the playoffs with an 8-8 record. For reference, the Raiders would not have more than 8-wins in a season for the next four years. In fact, Hue Jackson made such an impact with Raiders fans that they wanted him to save the struggling franchise. In 2014, The Oakland Tribune published a quarter-page ad asking management to hire him as Head Coach again. The ad was paid for using crowdfunding from Raiders fans on the website bringbackhuejackson.com, seriously. After his release from Oakland, he worked with the Cincinnati Bengals for a number of years. This is where Mike Zimmer and Jackson worked together during a two-year overlap from 2012-2013, after which Zimmer accepted a Head Coaching position with the Minnesota Vikings.

Mike Zimmer still seems to have faith in Hue Jackson from his interaction with him during this period. It was reported that after the 2014 season, Zimmer asked Jackson to help him evaluate his own offense in Minnesota. Consequently, the next year he became more involved in the offense, which was led in 2015 by Norv Turner. Tensions began to mount when Zimmer publicly criticized his Offensive Coordinator after a December loss to the Seattle Seahawks, in which Zimmer said he thought Turner should have run the ball more. Curiously, The Minnesota Vikings found themselves in a similar position in 2018, when Head Coach Mike Zimmer criticized his Offensive Coordinator, John DeFilippo, after a December loss to the Seattle Seahawks, for not running the ball more. Conveniently for Mike Zimmer, Hue Jackson loves to run the ball. When Jackson was the Running Backs Coach in Cincinnati in 2013, with Zimmer as Defensive Coordinator for the same team, the Bengals called 481 run plays on the season, 8th most in the league. The next year, with Hue promoted to offensive coordinator, they called 492 run plays, which was 5th most in the league. Even back when Jackson was the Offensive Coordinator in Oakland, the Raiders called 504 run plays, 4th most in the league, and gained a total of 2494 yards, good for 2nd most in the league that year.

Looking at Hue Jackson before he was known as the Head Coach of the Cleveland Browns, it is easy to see why the Vikings might be interested. He has a relationship with Mike Zimmer, and Zimmer seems to trust in his advice and offensive philosophies. Both Zimmer and Jackson love to focus their offenses around the run game, and Zimmer is old enough to remember when Jackson was known as the “Quarterback Whisperer” for his development of Flacco, Campbell, and others. Still, his hiring would be a tough pill to swallow for Vikings fans. Jackson’s coaching performance in Cleveland was about as bad as feasibly possible, winning only one game in his first two seasons. He has since lost the reputation of being good with Quarterbacks after his failure to turn Cody Kessler, Josh McCown, Kevin Hogan, DeShone Kiser, or Tyrod Taylor into quality players. He even seemed to have stunted the development of Baker Mayfield, who only recently started to play at a high level after Jackson was fired.

Fans are not wrong to be upset with Jackson’s hiring, many would prefer to keep Kevin Stefanski, if possible. If Stefanski leaves to take the Browns Head Coaching position, I would argue the Vikings should attempt to poach Cleveland’s current Offensive Coordinator Freddie Kitchens. After all, Baker Mayfield’s ascendance towards potentially winning Rookie-Of-The-Year started after Kitchens unlocked his true potential as a Quarterback. With Stefanski hypothetically taking over play calling in Cleveland, it should be easy to lure Kitchens’ to Minnesota with the promise of full control over the offense and offensive play-calling, as Zimmer would focus on the defense. But, in the end, it is not the fans, the writers, or myself who will hire the next Offensive Coordinator for the Minnesota Vikings. Head Coach Mike Zimmer and General Manager Rick Spielman will have control over that decision, and they might be inclined to offer the position to none other than Hue Jackson.