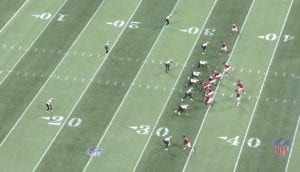 When the Vikings line up for their opening drive on Sunday night against the New Orleans Saints, they’ll likely be licking their chops. That’s because they’ll know who is lining up across from them. The New Orleans Saints, for all the attention their quarterback gets (and deserves), have one of the worst-performing secondaries in the league.

In spite of Marshon Lattimore, who is performing on par with his expectations, the Saints pass coverage is ranked 31st in the league according to PFF grades. A big part of that is injuries – the loss of Patrick Robinson to I.R. And P.J. Williams missing time with a concussion has no doubt harmed the unit.

But the players who are there are playing poorly. Of all cornerbacks who have played at least half of the available defensive snaps, Ken Crawley has given up the most yardage per snap in the NFL (tied with Malcolm Butler). Vonn Bell and Marcus Williams both rank in the bottom 20 in the same statistic.

A dive into the film reveals an almost disturbing trend. The Saints rarely disguise their coverage, or utilize any pre-snap tricks to try and fool a quarterback. We’re used to seeing this as Vikings fans:

Classic rotation (from C1/3 into pseudo-quarters but man on the weak side) tricked Rosen into the interception but I'm not sure what Rosen expected — the Vikings have showed the same zone against bunch for a while and this was that with a bit of dressing pic.twitter.com/Lt4lGepBr2

There’s a lot going on in this coverage – it’s cover 1 with Anthony Harris playing as the deep safety. But on the weak side, it’s man coverage with Harrison Smith showing blitz. Then, Harrison Smith backs off, Harris sneaks up, and it’s a completely different play than what Rosen thought he was seeing.

Compare that to this from New Orleans, early in their week 4 tilt with New York.

1st and 10. Beginning of the game. Can you guess the coverage? pic.twitter.com/YpqjXnwytL

See if you can’t figure out what the coverage is from looking at the pre-snap alignment. A hint (and the first sign of trouble for Dennis Allen): it’s the same coverage across the whole field, unlike the Vikings’ frequent move to play man coverage on one side and zone on the other.

So the Giants put two WRs on the right side, but both corners don’t follow (see Ken Crawley in tight on the boundary side?) That’s zone! Two deep safeties, and Crawley on the LOS, and that’s a cover 2 giveaway. Tampa 2, with the MLB dropping further back. An easy read for Eli. pic.twitter.com/c8Aj5anP9S

So the Giants only have two WRs, which means the Saints only have two corners. But even though the Giants put both corners on the right side, Ken Crawley didn’t follow. He’s at the top of the screenshot, in tight with the DE. This is a huge zone signal.

Next step: what kind of zone? Two deep safeties signals cover two. What you see is Tampa 2, a classic style of cover 2 where the middle linebacker drops a little deeper and covers the hole between the two safeties. But that vacates the middle of the field between the weak side and strong side linebackers, giving Eli Manning an easy throw.

This is an extremely vanilla defensive look with no attempt made to disguise it or throw off Eli’s read. He. Could have had any cover 2 beater dialed up, and been confident that it would work.

Try this one. Notice the safeties and the corners, then notice how the two linebackers have lined up.

If you guessed “Cover 2 man so all Matt Ryan has to do is look off the safety and Calvin Ridley will be open for a huge conversion” you’d be correct! And there’s a solid chance that was your first guess! pic.twitter.com/3psoLhpCce

This is a really weak play call on 3rd and 10. Notice the cornerbacks all lined up right on a receiver, with two safeties deep. That screams cover 2 man, which is exactly what we’re looking at. The weak side linebacker is showing blitz, which is exactly what he does (though he looks like he’s reading the LB a bit). Again, a very standard coverage package with no effort made to make it successful. Dennis Allen was just hoping that his cornerback would win a 3rd and 10 playing 10 yards off, which is a shaky proposition.

Ok last one. Pre-snap, you see this. What’s the read? pic.twitter.com/9sS6E5AxLM

Make sure you pay attention to that pre-snap roll. What does it indicate to you?

That little roll at the end is the giveaway, it’s cover 3. Fitzpatrick realizes all he has to do is hold the free safety with his eyes, and the deep post will be ripe pic.twitter.com/jeY2ECmlRJ

At first glance, we see the safeties lined up in another cover 2 look. But right before the snap, one safety scoots up and the other scoots back – now it’s a “MOFC” or Middle Of Field Closed” look. That little pre-snap move forces Ryan Fitzpatrick to re-evaluate his whole read, since the middle of the field isn’t going to be as open as it was. Thing is, Fitzpatrick has been in the league a long time, and has seen that a million times before.

Plus, Tampa’s play call beats cover 3. Chris Godwin’s deep out occupies the deep right corner, and Desean Jackson’s route is wonderfully set up for Ryan Fitzpatrick to hold Marcus Williams with his eyes. Williams sees where Fitz is looking, sees Jackson run that way, and is convinced that’s where the ball is going. Jackson then curves back toward the corner, and the play worked exactly as it was designed. Touchdown.

The Saints’ run defense is very stout, but they’re a bottom-ranked coverage unit for a reason. The players themselves have given up a lot of plays, but when they’re forced to make do with vanilla coverages and no assistance pre-snap, they’re in a losing position every time.