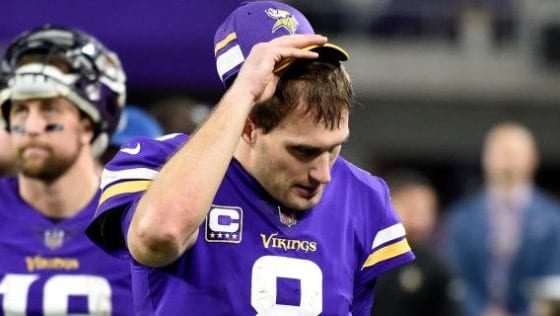 The Vikings season is not over. The Vikings have 4 total wins in Chicago and Green Bay since 2010, for a combined record of 4-15-2. Against all other opponents, they are 67-56 in the same time frame. This isn’t anything new and it doesn’t mean this team can’t go places this year. The different (or similar) issue is what we have seen from the quarterback position that makes these losses especially hard to swallow. Because of that, a lot of outsiders look at $84 million for Kirk Cousins and make the context-less determination that it was a rash move.

So instead, to understand this frustration, a brief history on the quarterbacks of the Minnesota Vikings:

Overall, we have seen eight different ‘majority’ quarterbacks combining for a 116-106-2 record (.522 winning percentage) and five playoff berths over 14 seasons. Outside of Favre, the list is comprised of failed rookies and journeymen.

When the Vikings signed Kirk Cousins it was supposed to put an end to up-and-down play the fanbase had become accustomed to from the most important position in sports. He didn’t have to be great, he just had to be good. Instead, 20 games into his tenure we see an eerily similar .525 winning percentage that the Vikings accomplished with plug-and-play options.

Everyone’s pointing fingers. So, who’s to blame? What gives and why are we here?

Rick Spielman and Co. quietly built one of the best rosters in the NFL since 2015. Between the stout defense and playmakers like Adam Thielen, Stefon Diggs, and Dalvin Cook, Spielman is hard to fault for his roster construction. As great as he’s been in those areas, his Achilles Heel is well documented to be the offensive line and the quarterback position.

It’s easy to argue that the failure at the quarterback position is not necessarily his fault. He survived a ‘miss’ on first-rounder Christian Ponder and followed that up with a ‘hit’ on Teddy Bridgewater. Bridgewater led the Vikings to an 11-5 record and what should have been a playoff win (courtesy Blair Walsh) against the Seattle Seahawks. With that made kick, everything is different.

Instead, Teddy Bridgewater never played another meaningful snap in purple, and Spielman looked around, saw a team that was ONE shanked kick away from being among the NFL’s final eight, if not better, and decided to trade a first-round pick for Sam Bradford.

After Bradford flopped (mostly thanks to his inability to say healthy and an objectively awful offensive line), Case Keenum entered and captured lightning in a bottle. Keenum was the type of replacement-level quarterback that Spielman sought when he made the Bradford trade. He didn’t need the quarterback to be a star to win with the roster he had assembled, he just needed him to be good enough.

Keenum’s play was determined (fairly) to be unsustainable, so in 2018, Spielman signed Kirk Cousins to a record-breaking $84 million-dollar contract to provide the stability the team has been looking for since the early 2000s.

To break it down simply, Spielman was forced into two major decisions:

Hindsight is 20/20, and still without consistent quarterback play or a Super Bowl, it’s easy to want a do-over, but I am in the camp that Spielman rightly exercised a natural unwillingness to waste the 2016 season and turn the keys of the car over to an unnamed rookie in 2018.

Zimmer gets occasionally knocked for being a great defensive coach, but maybe not a great head coach. In Zimmer’s tenure, he has shown some issues getting on the same page as the offensive coordinators (Norv Turner, John DeFilippo). It’s possible he’s a great defensive mind but being a head coach isn’t his calling card. With that said, Zimmer is one of the most successful coaches in Vikings history, establishing a .589 winning percentage (far better than the .522 over the past 15 years) despite a revolving door at quarterback.

Despite his relative success, the 2019 Vikings are arguably Zimmer’s best roster and he needs to turn in results before his seat starts getting warm. We know that the defense will always be strong with Zimmer leading the charge, and with Cousins at the helm, Zimmer finally has stability at quarterback that has eluded him throughout his term. It’s up to him to get results. I am personally a Zimmer supporter, but if he is unable to turn this into a winning team, it’s fair to question whether he is the right man for the job.

It’s important to establish what was intended when the Vikings signed Cousins to an $84 million contract. He didn’t need to be the best quarterback in the league despite being paid like it. He needed to be the missing piece, provide stability, and take the same roster that Case Keenum took to the NFC Championship game to a similar place, if not further.

Cousins was welcomed with open arms early in his Vikings tenure, especially after he came back to tie the Packers in Week 2 of 2018. In that game, we saw comeback ability with which Viking fans were all too unfamiliar, as Cousins showcased more talent than any quarterback in recent history. The $84 million was worth it… briefly.

Twenty games later, we’ve seen a quarterback far from the façade he displayed in Green Bay, boasting the aforementioned .525 winning percentage that mirrors the ghosts of Vikings past. Cousins failed to have a statement win in purple in 2018 and led the team to a paltry 8-7-1 record. Coming into 2019, the Vikings equipped him with the additions necessary (Kubiak, offensive line overhaul) to catapult him into a game-changing quarterback. Instead, rather than complement the offense that is centered around Dalvin Cook, he is still failing to win the fringe games he lost in 2018.

The 2-2 start may not be that surprising due to the Vikings teams in recent history, and because of that history we know the season is far from lost when you lose in Green Bay and Chicago. However, we expected to see something special in 2019 after some growing pains in 2018. But instead of seizing the opportunity to showcase that, we see a team that looks rather ordinary. The Vikings are 2-2 with Cousins, but they’d also be 2-2 with just about anybody else playing quarterback (maybe even 3-1). It doesn’t mean put Sean Mannion in (please stop with that), but Cousins is not adding any value to the win column.

What is perhaps even more frustrating is that a quick glimpse around the league shows Panthers back-up quarterback Kyle Allen going into Houston to get a win and Teddy Bridgewater doing just enough for the Saints to win at home versus the undefeated Cowboys. These guys are hardly lighting the world on fire but they’re doing enough to win games that could go either way, both already having bigger wins than Cousins has had throughout his Vikings career. Approximately ten plays will decide if a team is 6-10 or 10-6. He moves the needle towards the former.

The final straw isn’t losing in Chicago or Green Bay, but it’s losing because of offensive ineptitude, specifically quarterbacking ineptitude that is deflating the rest of the team (see comments from Thielen) as well as the fan base. Cousins is armed with a top defense, two top receivers and arguably the league’s best running back. There are absolutely issues on the offensive line, but there is plenty of shoddy line play around the league. Heck, Everson Griffen and Danielle Hunter pressured Chase Daniel all day, and even he still did alright throwing to a far worse supporting cast.

Cousins doesn’t have to do much, he just has to do enough. Avoiding the Week 2 interception in Green Bay, or hitting Thielen on a deep touchdown in Chicago in the first quarter and it’s not hard to see this team being 4-0. But those plays seem like a pipe dream, as Cousins is skittish and shows an extreme lack of comfort on a game-by-game basis. There’s plenty of time to turn it around. We are 20-games into a 48-game contract for Kirk. He needs to show that he’s different enough from the revolving door the Vikings brought him in to replace. The longer that takes, the more restless we will become and the more likely that 2020 will be very different.