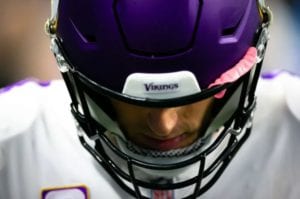 The Cousins revisionist history has to stop

Ask my fiance. I spend far too much time working on our sites and attempting to keep my finger on the pulse of what you guys are thinking/saying about our (once) beloved Minnesota Vikings.

One reoccurring comment/narrative that I’ve seen in response to… Basically everything we post on social media is that somehow because Vikings quarterback Kirk Cousins is having a bad start to the season, he suddenly has always been terrible and everything he’s done has essentially cut the Vikings’ Super Bowl chances off at the knees.

One comment in particular made me want to write this piece. I was perusing one of the 20 places our stuff gets cross posted to and saw someone that had responded to one of the rare comments I (Personally had) actually have posted on social media in the past couple months.

That comment was that I was essentially off my meds because I’d said that after Week 4 last season Cousins’ stats almost identically mirrored Patrick Mahomes’ 2018 MVP numbers.

Is Cousins having a bad year? Yes.

Was it a mistake to extend him when the team is in a complete rebuild? Yes.

Has he always been awful? No.

He is the SECOND most accurate passer in NFL history by almost a full percentage point. But, all those passes had to be during garbage time right? Or when things are perfect like … in Washington. Or with no semblance of a clean pocket here in Minny. For a guy who has given Jefferson an average of 25 yards per catch at the start of this season, or helped Diggs become the top deep threat last year, this isn’t some 2016 Bradford dump off situation either.

I wrote article after article in 2019, especially, comparing Cousins’ performance against the negative narratives those who still wanted Teddy (or Case Keenum, who proved on two teams in two years that he caught lightening in a bottle in 2017. And as we know as Vikings fans, lightening doesn’t strike twice for the purple (just ask Brett Favre)) to helm the Vikings.

From the beginning of this season (which sums up my articles from 2019):

Comparing Cousins’ paycheck against his statistics:

The playoff win some said he’d never get:

Kubiaks influence on the explosive post Week 4 2019 offense (how did that happen if he’s so bad?):

Gary Kubiak: The QB Whisperer and his Influence on this Explosive Vikings Offense

The comeback win against Denver some said he’d never get?

Was Denver Cousins’ Best Game? Does it Matter?

From “YOU LIKE THAT” to it just doesn’t happen like that; Cousins has Proven he was the Right Choice for the Vikings

Or the idea he needs everything to be perfect? Like that amazing line last season?

So, let’s agree that he’s having a bad year. But, that doesn’t offset that he carried the team at start of the 2018 season when the defense was a shell of it’s 2017 self.

He took a paycut (to get more guaranteed money in 2021, 2022, sure) in 2020, so the salary cap squeeze this team is going through isn’t on Cousins and his $21 million 2020 cap hit. The team brought on Sheldon Richardson after Cousins, if you recall. They also extended Dalvin Cook after Cousins.

I don’t agree that they should’ve extended Cousins because this team will rebuild faster if they don’t win meaningless games. But, this team has done nothing to protect Cousins and in 2020 have somehow REGRESSED since 2019 and the 27th ranked unit.

If you don’t remember the fact that Cousins accomplished the above despite literally needing to rollout or run a bootleg on every (successful) passing down, then you’re just showing that you’re upset that Cousins broke the bank in 2018.

Newsflash. His deal set the market and other quarterbacks are making a lot more than he is. So, that’s the reality of the NFL, and not like the team is still crazy for paying Cousins a market rate WHEN they were basically a mediocre offensive line away from a real run at a championship.

So, let’s focus on the now. For those that say “One bad year and you’re turning on Zimmer/Spielman?” While doing the same about Cousins, we can agree he is having a bas year but we also should look at the why and then reassess the whole “one bad year” narrative for those actually responsible for the current state and the recent limitations this team has clearly had.