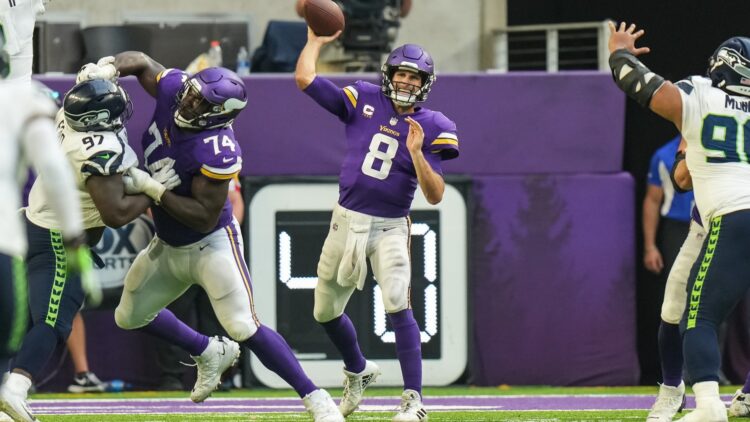 Many fans have been vocal about their displeasure with Mike Zimmer or Kirk Cousins (or both). That’s what happens when the HC has been in town for nearly a decade without winning a SB. That’s what happens when a QB is highly-paid without winning a SB. Well, these fans now have some support from a well-respected, thoughtful NFL writer. The Athletic‘s Sheil Kapadia recently put forth some quibbles and doubts about Minnesota’s leadership.

Here is what Kapadia has to say: “Watching the end of this game unfold, I couldn’t help but wonder what the point even is of the Mike Zimmer/Kirk Cousins 2021 Vikings. Up 28-20 with 3:05 left, the Vikings had a third-and-8 from the Carolina 33. Instead of giving Cousins a chance to pick up the first down, they handed it off to Dalvin Cook, who was dropped for a 3-yard loss. The Vikings then took a delay of game and punted. The Panthers drove 96 yards for a touchdown and converted on the two-point try to tie the score. Is Zimmer making decisions based on the team he has or the team he wishes he had?”

He goes on: “A simple question that organizations should ask themselves before agreeing to pay a quarterback $33 million or more per year: Do we trust this guy to try to convert a third-and-8 with the game on the line? If the answer is yes, continue with the discussion. If the answer is no, move on.” He questions whether Zim will finally let his QB take over at the end: “The Vikings are now 3-3, and Cousins has led winning drives in back-to-back weeks. Maybe that’s enough to convince Zimmer and the coaches to let him try to pick up a third-and-8 next time. Then again, maybe not.”

I both agree and disagree with Kapadia’s opinions on the Vikings leadership. Allow me to explain myself.

On the one hand, Kapadia is exactly right. We’re paying a QB top dollar and we don’t trust him to win the game for us at the end. What gives? We have Justin Jefferson and Adam Thielen out there, both of whom are excellent options in clutch moments (and non-clutch moments, for that matter; they’re always great options). Dalvin Cook is our elite RB (the one who deserves far more targets in the pass game). What in the world were they thinking with that run on 3rd & 8? It was a brutal play call. Klint Kubiak, as I’ve been saying, has a ways to go.

And yet I can also see Zim’s rationale. Up until the end of the fourth, the defense had been excellent. We were getting after Sam Darnold all day, hitting and moving him off his spot with consistency. Carolina’s receivers were dropping passes like it was going out of style. Their two TDs were the result of Minnesota fumbling the ball deep in its own territory and then the blocked punt. Otherwise, we only allowed FGs. Were we really scared of them marching 96 yards down the field against a defense that was playing so well? We obviously felt like we could shut them down, which ended up being wrong. That said, I can see Zim’s reasoning.

So, is Kapadia right to question the Vikings leadership? Without question. At a modest 3-3, we ought to be questioning those who are leading things in Minnesota. Another lousy season is completely unacceptable. If we end the year with an 8-9 or 9-8 record, the Wilfs ought to seriously consider moving on from their current Leadership Trinity.