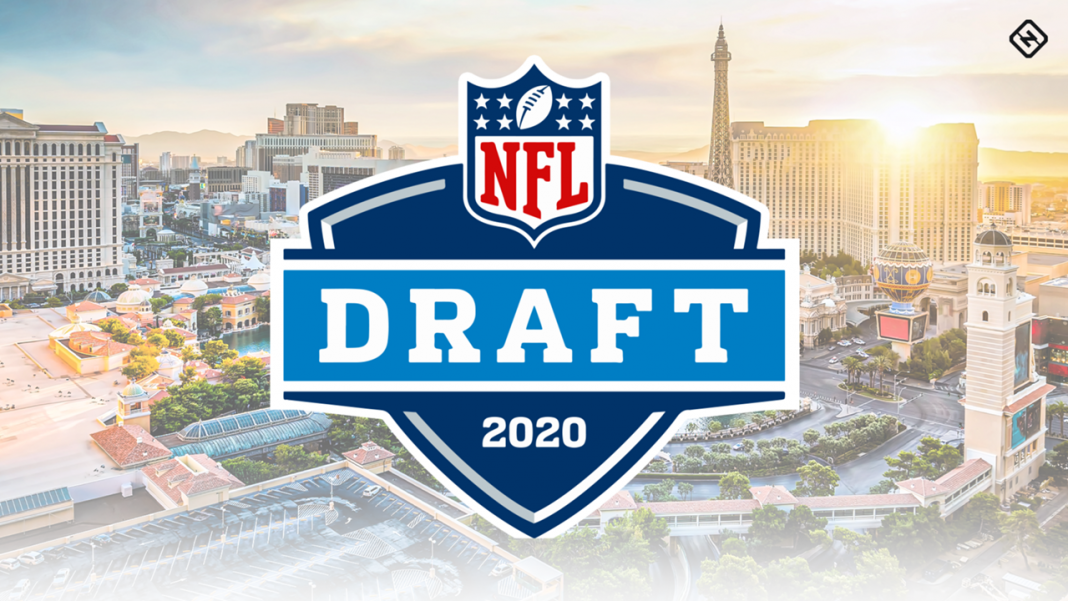 You shake off the intense thought you have been having for the past few moments and regain your senses in the middle of complete chaos. Phones are ringing, people are yelling, and you’re on the clock.

It’s draft day and you are the General Manager ready to make a selection that will hopefully shape the franchise for years to come. You and your team have spent months and months doing the proper due-diligence getting ready for this moment, and now it all comes down to this.

“I have Los Angeles on the line, they are interested in trading up with us”, someone yells from across the room.

“Baltimore on line two, they are offering two second-rounders for a pick swap.”

You’ve listened to offers, but you’re confident in this selection. Every fiber of your existence is screaming at you to draft this player. This is the right selection that will shape your legacy, and you call in the pick.

And you pick wrong. But you don’t know it yet.

At the moment you’re happy. You don’t pay attention to the sea of boos and the 12 year-old crying in the crowd because what the hell do they know anyway?

But then a year passes.

And then you come to a point, if you’re still lucky enough to be employed by the same franchise, where you’re sitting in silence. It’s 12 am, the lights are low, the ashtray is full and you’re working up the courage to come to grips with the fact you fucked up and you’re not picking up the players’ 5th year option.

Situations like these have happened an endless amount of times and many a GM have found themselves looking back on what could have been.

With the 2020 NFL Draft happening just under two months ago, every team is clamoring that they picked “the steal of the draft”. Even franchises like the Green Bay Packers who made extremely puzzling decisions on draft day stand firm and confidently behind their selections.

So, who is right and who is wrong? Every draft has their busts and steals, and looking back at this years’ draft class could yield very different opinions in the future.

In the spirit of that, I managed to look back and find five draft regrets from the past 15 years that every GM should squirm at (and — since this is a Vikings-centric site — included two Vikings-centric entries).

Five “what if” draft selections that had the potential to change the entire course of franchises.

1. What if the St. Louis Rams drafted Aaron Donald AND Khalil Mack?

In the 2014 NFL Draft the St. Louis Rams had two selections in the first round, number two and number 13.  With the second overall pick, they selected offensive lineman Greg Robinson from Auburn, and with the 13th overall pick they selected, of course, Aaron Donald.

Greg Robinson proceeded to have an extremely underwhelming tenure with the Rams, eventually being traded to the Detroit Lions after his third year in exchange for a sixth-round draft pick. Aaron Donald, on the other hand, is arguably the best defensive player in the league.

Khalil Mack was drafted by the Oakland Raiders with the fifth overall pick, and you would be hard-pressed to find a better duo in the history of the NFL if the St. Louis Rams would have drafted Khalil Mack to go alongside Aaron Donald in the 2014 NFL Draft.

In fact, there might not be a better duo period.

Batman & Robin? Batman is an insecure billionaire with mental issues and they both wear tights.

Ben & Jerry? They have good ice cream and they’re millionaires, but a couple million dollars isn’t cool. You know what’s cool? Half a billion dollars. As in, nearly the amount of money the pair will have when their current contracts run their course.

Had the Rams selected Khalil Mack at number two to go alongside Aaron Donald at 13, they would have the most fearsome and game-changing defensive pairs of the decade, and quite possibly ever.

2. What if the Vikings drafted Michael Thomas instead of Laquon Treadwell?

At the time it seemed like most everyone was on board with the 2016 Laquon Treadwell selection; a fairly big-bodied red zone dream from the SEC. He was supposed to be our Eric Decker, our Brandon Marshall, and for the extremely deranged, our Calvin Johnson.

The pick, unfortunately, was a complete flop. Reports constantly came out from practices and training camp that Treadwell is a hard worker, but his efforts don’t translate to the field. Who would have thought an NFL wide receiver actually needs to be able to catch?

Going back to the year prior, the 2015 season saw Adrian Peterson have a career resurgence, tallying 1700 yards from scrimmage and leading the team to an 11-5 record.

But with Stefon Diggs and Adam Thielen having not become household names yet, with Mike Wallace and Jarius Wright failing to even combine for 1,000 yards, with Kyle Rudolph being the teams’ second leading receiver with 495 yards, the Minnesota Vikings desperately needed a wide receiver in the 2016 draft.

Will Fuller and Josh Doctson were selected in successive picks before the Vikings’ selection, and the team pulled the trigger on drafting Laquon Treadwell with the 23rd overall pick.

The next two wide receiver selections went: Sterling Shepard at the 40th pick, and Michael Thomas with the 47th pick.

Laquon Treadwell is now with the Atlanta Falcons after flaming out with the Vikings, and Michael Thomas just set the NFL record for receptions in a season.

Had the draft gone differently, a trio of Stefon Diggs, Adam Thielen, and Michael Thomas would have absolutely terrorized the league and would’ve given Randy Moss, Chris Carter, and Jake Reed a run for their money.

3. What if the Arizona Cardinals drafted Adrian Peterson?

Adrian Peterson is unequivocally the greatest Minnesota Vikings to don the purple and gold since the turn of the century, and is in the conversation for one of the greatest ever.

The long, storied career of Adrian Peterson in Minnesota could have been completely wiped from the slate of existence had the Arizona Cardinals drafted Peterson with the number five selection in the 2007 NFL Draft.

That year, the Arizona Cardinals came off a 5-11 season; the Minnesota Vikings came off a 6-10 season.

The Arizona Cardinals drafted Levi Brown, a good but not great offensive tackle with the fifth overall pick; the Minnesota Vikings drafted Adrian Peterson, one of the best running backs of all time with the seventh overall pick.

The Cardinals didn’t think running back was a pressing need, but there are certain players you don’t pass on regardless of fit.

Adrian Peterson is one of those players.

In 2008, the Arizona Cardinals came painstakingly close to winning the Super Bowl 43, but came up just short to the Pittsburgh Steelers 23-27.

Everyone remembers James Harrison’s iconic pick-six that he returned 100-yards in the final play before halftime. That made it 17-7 at half.

That play, the Cardinals had a first-and-goal on the two-yard line. Put Adrian Peterson in the backfield, and there’s no way they throw the ball and quite possibly go into halftime up 14-10.

4. What if the Vikings drafted DeAndre Hopkins?

The 2013 NFL Draft featured yet another so close yet so far moment for the Minnesota Vikings to acquire an absolutely elite wide receiver.

Going into draft day, the Minnesota Vikings had two first-round picks and were in desperate need of; a defensive tackle to put next to and eventually replace the aging Kevin Williams, a cornerback, and a wide receiver to replace the recently traded Percy Harvin.

The first selection for the Vikings at number 23 was a no-brainer at the time. Sharrif Floyd was graded as one of the best defensive tackles in the draft, and his free-fall from projected top-5 pick to number 23 led Vikings General Manager Rick Spielman to make one of the quickest draft selections he may have ever made.

With the next few picks, the Vikings selected cornerback Xavier Rhodes at number 25, and the team traded back up into the first round to select Cordarrelle Patterson at number 29.

Clearly, the Vikings prioritized securing a cornerback before a wide receiver, but if the team would have flipped their priorities, the next wide receiver off the board at number 27, two picks after Xavier Rhodes, was DeAndre Hopkins.

Hopkins is arguably the greatest wide receiver in the league, and what makes him so special is that his play is not dependent on who is throwing him the ball. He has eclipsed 1000 receiving yards five, and nearly six, years of his seven-year career, and managed to attain these numbers with the likes of Matt Schaub, Brian Hoyer, Ryan Mallett, and Brock Osweiler under center.

In this scenario, Stefon Diggs may have not been selected in the 2015 NFL Draft, but Adam Thielen joined the team in 2014 as an undrafted free agent. The Diggs-Thielen years were extraordinary, but a combination of DeAndre Hopkins and Adam Thielen would have been unequivocally and un-debatably the best receiving duo in the NFL.

5. What if the Broncos drafted Devin McCourtey instead of Tim Tebow?

Tebow-mania arguably reached its peak in 2009 at the conclusion of the Sugar Bowl, with the Florida Gators defeating the Cincinnati Bearcats.

Tim Tebow and the Gators barely missed playing in their second consecutive BCS Championship Game, but that didn’t stop the (at the time) only ever Sophomore Heisman Trophy winner, two-time SEC Player of the Year, two national titles in four years, and now, NFL eligible player, from being hyped to the moon.

Questions ran rampant about his actual skill level when translated to NFL competition. No one could debate his athleticism, his rushing ability, his tenacity, his leadership, but what about the skills that make someone a great quarterback? Namely, throwing power and accuracy?

Analysis ranged from Tony Dungy saying he would take Tebow with a top-10 pick, to Mel Kiper Jr. saying Tebow would need to transition to running back to ever make it in the NFL.

This led NFL GMs to put pieces of paper labeled “This kid’s a stud” and “STAY AWAY” on a dartboard, shotgun a beer, spin around 10 times, throw a dart at the board and base their draft strategy on whatever piece of paper the dart landed on.

Draft day came, and clearly the Denver Broncos were in the “This kid’s a stud” camp. The team had two first-round draft picks in 2010, first selecting Demaryius Thomas at 22 overall, followed by Tim Tebow at 25 overall.

The thing is, the Broncos arguably had bigger needs than quarterback.

Yes they didn’t have a franchise quarterback, as the most reliable starter on their roster was Kyle Orton who went 8-7 with 3802 yards, 21 TDs, and 12 INTs the year before, but they had bigger holes to plug rather than gambling a first-round pick on a complete question mark.

They had an aging secondary. With a glaring lack of depth, and an average age of nearly 34 among starting cornerbacks and safeties going into the 2010 season, a secondary player should have been more of a priority.

Devin McCourtey has been an above average to elite defensive back every year he has been in the league and would have been a day-one plug and play stud for the Denver Broncos.

Broncos fans won’t lose too much sleep over this misstep however, as Peyton Manning joined the team in 2012. From 2012-2015 the Broncos went a combined 50-10, making the Super Bowl twice and winning one championship.

But the question remains: could more championships and potentially a dynasty have been in the cards for the Broncos if they had chosen Devin McCourtey instead of being infected by Tebow-Mania?