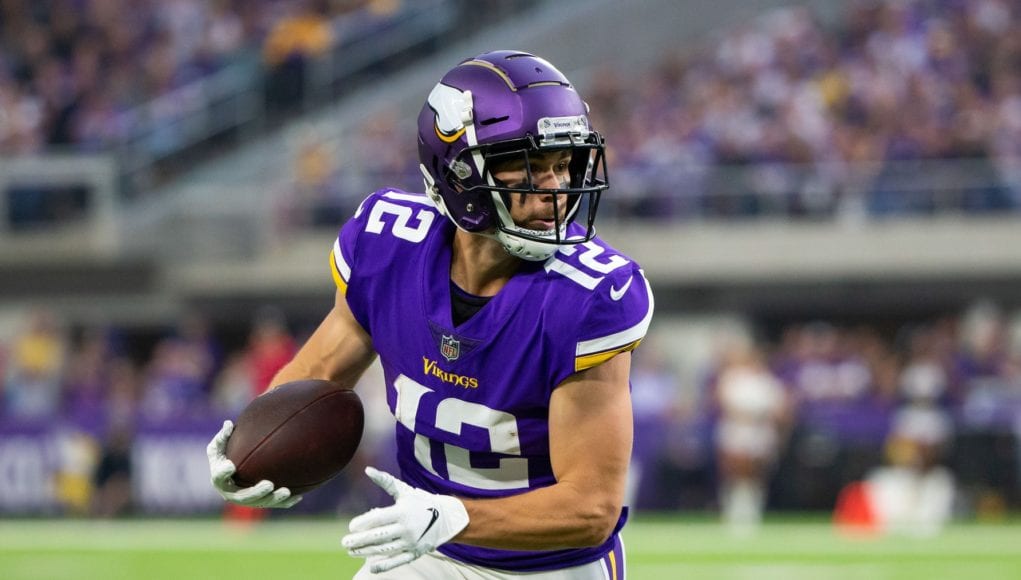 The Vikings are on the doorstep of the 2019 preseason and all is not well in Purplelandia. Training camp has gone along with little in the way of major news—good or bad—and for a team coached by the notoriously “under-the-radar” Mike Zimmer, that is just fine. But there are some little wrinkles to look at if you stare deep into the cup to see what the tea leaves will tell us. Here are just a few as we head into the first game.

Wide receiver Chad Beebe is emerging on the roster both as a contributor on offense and special teams. General manager Rick Spielman told Paul Allen on KFAN the other day that the team was looking at Beebe as punt returner. He then quickly added others into the mix, but Beebe’s name came up first in this context, and observers at camp have reported that he has gotten a lot of reps at the position.

This will only boost his prospects as WR No. 3, a camp battle that has been waging all off season. According to a local scribe who is attending camp, he likes that Irv Smith, Jr. with his skill set and the amount of time he may see the field with Kyle Rudolph this season, may be the default WR3—catching a lot of passes and perhaps supplanting the need for a typical wideout in the spot. But what that tells me is that Beebe, with his very good hands, excellent route running and some of the quickest moves on the team, will compliment Smith and enable him to contribute to that WR3 spot, as well. For any NFL team trying to cover all their needs with a 53-man roster, having a guy like Beebe, who can contribute at more than one spot, is a bonus. This talk of him as the PR nearly solidifies his spot on the roster when you see how he has played throughout the spring and summer.

Jake Browning has turned some heads at camp with his strong arm and scheme fit. The quarterback battle is one of the more interesting ones in camp with three players lining up behind Kirk Cousins for the backup spot. Kyle Sloter has been around town for a few years but really hasn’t gotten past the development stages with the team thus far and he has seen some of his practice reps get swallowed up by newcomers Browning and Sean Mannion. Mannion comes in with the most NFL experience but you hear Browning’s name more than anyone’s.

This battle, more than any other, should keep Vikings fans watching all four preseason games until the final gun to see for themselves who will make the squad. Cousins should play one series on Friday and what we in the QB rotation the rest of the way will start to dictate what the Vikings are looking at. If Sloter is, once again, the odd man out in this preseason, the writing will not only be on the wall but on the field.

Zimmer called out the defense to the media for some nonchalance at practice and that is never something you want to happen in camp. Even if they have been top five/10 the past few seasons, there is no mailing it in in camp in the NFL, and Zimmer knows that and said as much. The defense responded following the news of the head coach’s comments reaching the wire, but all eyes will be on them as the camp continues and the preseason starts. There are some weak spots due to injuries (see below) in the defensive line and the defensive backfield, that no previous year rankings can mitigate. We never like to see Zimmer singling out his charges in the press, but if it is an effective way to reach them where all other attempts have failed, so be it. Regardless, the defense will find themselves in a fishbowl the rest of camp and into the early season—particularly after how they started last season. We don’t think Zimmer wants a repeat of last season’s slow start, and that begins in camp. Even for a group loaded with Pro Bowlers, many of whom, we should mention, are sitting on nice contracts.

The Vikings have sustained some player suspensions this offseason. The first went to running back Roc Thomas (who is now a member of the Jacksonville Jaguars) and the second to cornerback Holton Hill, who was with Thomas when the alleged incident that got them in trouble took place. Hill is out for eight weeks (four weeks for PEDs included), which is a substantial blow for the defense. He had contributed last year and was needed to be around this year as Mike Hugues is still recovering from knee surgery. The Vikings have not sent him packing yet, so that is a good sign for Hill, but he is likely down to his last strike with the team and needs to get things figured out.

In the meantime, the Vikings have some younger CBs in camp (Kris Boyd, Craig James and the newly arrived Bené Benwikere, for instance) to bolster depth, so the preseason games will be a great opportunity to see if any of them can jump up, make an impression and allay fans’ fears for having to depend up Hill the second half of the season.

The Vikings have sustained their share of injuries—chief among them to the defensive line (Linval Joseph, Shamar Stephen and Tashawn Bower)—and tight end David Morgan (still not back) and offensive tackle Aviante Collins. Collins extended absence would hurt depth on the offensive line, but Zimmer expects him to return. Morgan’s injury, which has caused his absence to linger since OTAs, could be more troublesome. The offense needs him back on the field ASAP. Injuries only provide others the opportunity to step up (you can almost hear one of the Vikings players or coaches saying “Next man up!”). More to see starting Friday night.

(Who needs 18 regular season games when you have this much on the line in preseason games, right?!! Okay, maybe that was too far.)

Finally, we don’t advise you heading to the refrigerator after the Vikings score a touchdown or line up for a field goal. The kicking game hasn’t been exactly stellar thus far in camp, what with the Vikings trying out different holders (Adam Thielen?) and punter Matt Wile feeling the heat in that regard. We don’t expect any change in the setup of the kicking game (although it is worth watching how long snapper Kevin McDermott does in his battle with rookie Austin Cutting). But we also are not yet recommending taking kicker Dan Baily earlier in your fantasy draft until you see this crew tighten up their execution. Fantasy football research—now that is what makes the preseason worth watching. Time for another cup of tea.