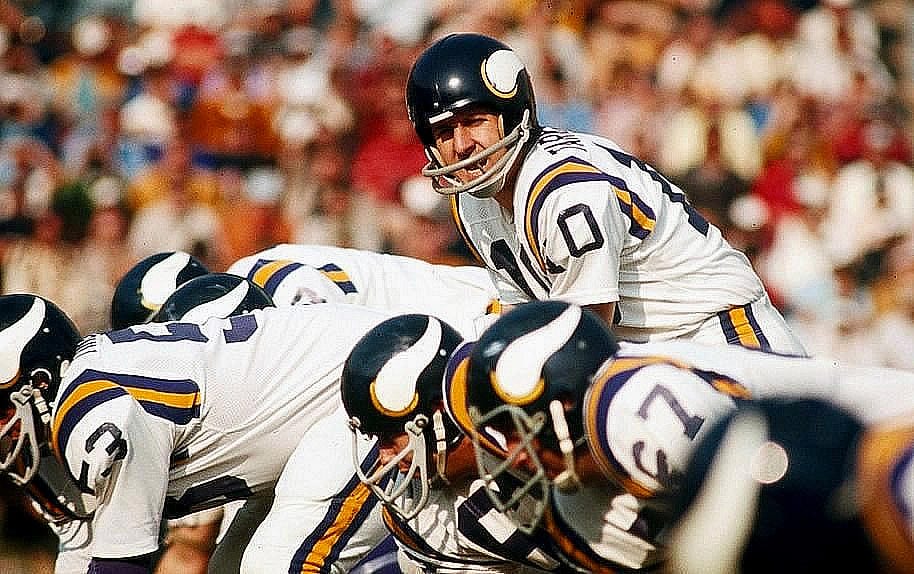 *Editor’s Note: This article comes from ‘The V61’ (vikings61.com), a friend and partner of Purple PTSD and Vikings Territory! Check out them out daily for news, analysis, and history of the Vikings!  Follow the V61 on TWITTER here!

Fran Tarkenton was drafted a Viking in 1961 the franchise’s first year, traded to the New York Giants in 1967, and then traded back to Minnesota in 1972. Tarkenton then lead the Vikings to three Super Bowl appearances in four seasons, ending his career in 1978.

For six seasons, Tarkenton struggled with a diverse group of teammates to bring Minnesota respectability, but put in a division with top teams like the Green Bay Packers, Chicago Bears and Detroit Lions, the young Vikings were consistently outmatched.

Unfortunately, that struggle brought little winning fruit, and the Vikings’ only decent season was 1964, when they went 8-5-1.  In six years in Minnesota, Tarkenton had thrown 113 touchdowns and 95 interceptions.

In 1967, both he and Van Brocklin left Minnesota, the 27 year-old Tarkenton traded to the New York Giants, the old coach and one-time great QB Van Brocklin sent into retirement at the request of Vikings’ GM Jim Finks.

In 1966, The Giants finished the NFL season with the worst record in franchise history, going 1-12-1, and making coach Allie Sherman and New York itself look bad in the process.

Giants’ owner Wellington Mara wanted a change from ineffective quarterbacks Gary Woods and Earl Morrall and made a deal with Minnesota to bring Tarkenton to Gotham.  Wellington needed something exciting to put butts in the seats of Yankee Stadium, and young “Fran the Scram” was going to be the ticket.

In a complicated and dramatic transaction, Minnesota sent Tarkenton to New York and the second overall selection in the 1967 NFL draft as well as the 28th pick in the first round.

In 1971, Tarkenton’s passing numbers were down and his interceptions were up.  New York’s run game and defense were subpar, and the Giants’ bombed out with a 4-12 record.

Things begin to sour between Tarkenton and the Giants during that ‘71 season.  He upset the Giants’ team president when he briefly walked out prior to the first preseason game due to a contract dispute, and later even expressed the desire to play for a contending team.

Back To The Great North

The Vikings’ sealed the deal by also offering the team’s first round pick in 1972 and a second rounder in 1973, a massive proposition that Giants GM Ray Walsh accepted eagerly.

The Minnesota Vikings of that time had flourished without Tarkenton.  They had won the NFL Championship in 1969 but had lost Super Bowl IV to the Kansas City Chiefs.  Their defense had become the league’s gold standard, but their quarterback situation was stagnated.  Joe Kapp, the hero of the ‘69 season had left disgruntled, and his replacements, Gary Cuozzo  and Bob Lee, were merely average talents.

In reaction to the trade, Tarkenton said:

“We are very happy about going to Minnesota.  Back home, almost, to where we started.”

To say that Tarkenton gave Minnesota the player they needed couldn’t be a greater understatement.  The Vikings would go on a six-season run as an NFC powerhouse with Trakenton at the helm, in the playoffs at every opportunity, and winners of three NFC Championships in four years.

In 1975, Tarkenton won the NFL Most Valuable Player Award and the NFL Offensive Player of the Year Award, and was selected NFL First-Team All-Pro..

When he retired, in 1978, Tarkenton held NFL career records in pass attempts, completions, yardage, and touchdowns; rushing yards by a quarterback and wins by a starting quarterback.

Yes, the Vikings would lose three Super Bowls with Fran Tarkenton as their quarterback the second time around, but considering the fact that their very franchise began at the very bottom with number ten at the wheel, it was pretty impressive to see them have a crack at the top ten years later with the same guy calling the signals.

Fran Tarkenton was inducted into the Pro Football Hall of Fame in 1986.