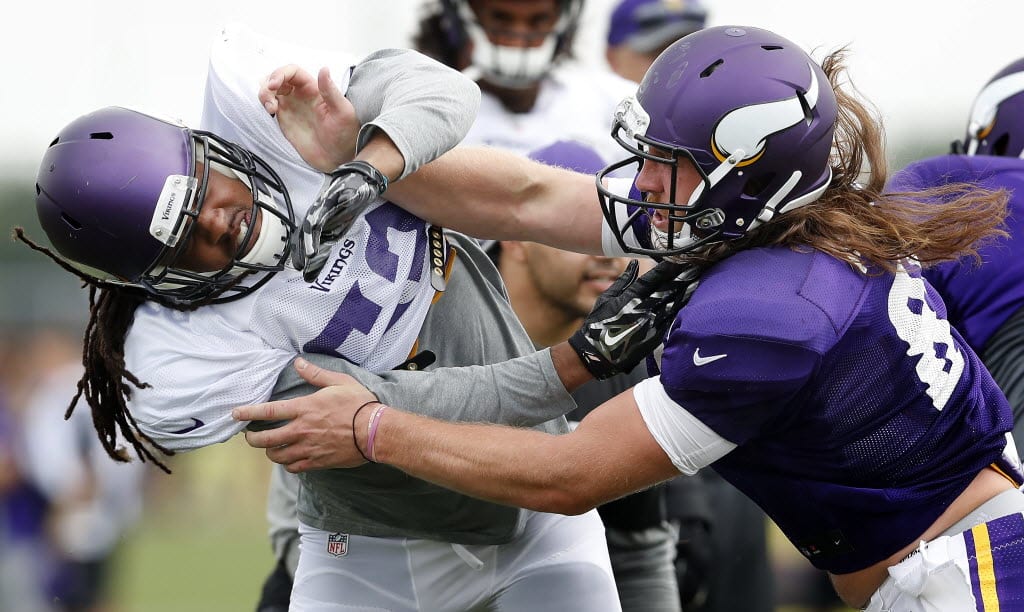 Much has been said about the state of the Minnesota Vikings Offensive line. After the retirement of Joe Berger, injuries to Nick Easton and Pat Elflein, and the underwhelming performances of Riley Reiff and Mike Remmers, many fans have blamed a lack of blocking as the primary reason the Vikings 2018 season ended as unsuccessfully as it did. The fans are not wrong. I have written about how the Vikings should cut Mike Remmers and use the money saved to find his replacement. Nick Olson of VikingsTerritory.com suggested that the most important improvement the Vikings can make this offseason is finding the right Offensive Line coach, and the Vikings themselves are open to making changes, reportedly starting with moving left tackle Riley Reiff to left guard.

This topic will be discussed at length throughout the offseason, especially as free agency and the NFL Draft illustrate the Vikings front office plans. But football is a team sport. No matter what methods the team uses to retool the offensive line, those five players will have to be supported to reach their peak performance. The Vikings must have an offseason plan for this as well.

Here’s how the Vikings can support their offensive line:

Specifically, finding depth to compliment David Morgan’s blocking ability, not Kyle Rudolph’s receiving numbers. Tight end David Morgan suffered an injury in Minnesota’s Week 9 game against the Detroit Lions. Through those 9 weeks the Vikings had a record of 5-3-1, and averaged a Pro Football Focus (PFF) run blocking grade of 57.1. Not great, but good enough for five wins. Over the next 4 weeks in which Morgan missed time, this run blocking grade was reduced to 54.7, the offensive coordinator was fired, and the team went 1-3. Overall, PFF ranked Minnesota’s offense with a 73.5 ranking in the first 9 games, and a 69.2 grade in the next four that Morgan missed – including a season low ranking against the Seattle Seahawks on Monday Night.

To be clear, the loss of David Morgan isn’t the sole reason the Vikings missed the playoffs. But his ability to compliment the Offensive Line, hold his own on run blocking assignments, and boost the performance of Dalvin Cook and the Vikings other running backs is important. Getting another tight end who can block, specifically on running plays, would help the offensive line greatly. Tyler Conklin played much of his non-special teams snaps for the Vikings in Morgan’s absence during weeks 11-14, and also had a role in offensive coordinator Kevin Stefanski’s first game versus the Miami Dolphins. While Conklin held up as a pass blocker, he performed terribly as a run blocker. Over that five game stretch, PFF graded him at an average of 55.2 on run blocking. His play was a downgrade from Morgan, and could have been a reason the Vikings failed to establish the run in their games against the Patriots and Seahawks. 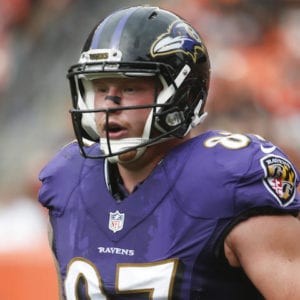 Luckily for the Vikings, tight ends who specialize in blocking over receiving are less expensive in today’s NFL. For either depth or the ability to block with David Morgan in two tight end sets, finding a run blocking tight end in free agency should be relatively easy. Without needing to spend draft capital or dip too deep into their cap space, the Vikings can help their offensive line and their running backs.

With five tight ends on their roster and limited cap space, it is unlikely that the Jacksonville Jaguars will re-sign unrestricted free agent James O’Shaughnessy. O’Shaughnessy blocked on 215 run plays, per PFF, and graded as the fourth best tight end in the league in that role – with a PFF run blocking score of 78.3. A former fifth round pick with only 46 receptions in his four year career, O’Shaughnessy should be an inexpensive signing. A deal with an average salary of around $2 million a year should be enough to get him to sign with Minnesota. The Baltimore Ravens also have two 2015 tight end rookies – Maxx Williams and Nick Boyle – who grade in PFF’s top 12 tight ends in run blocking. The Ravens also currently have five tight ends on their roster including Hayden Hurst, their top draft pick this past year. So at least one of these two, Williams or Boyle, should end up on the free agent market. Again, a similar low-cost contract should be enough to sign either one.

Pass blocking, at the end of the day, is simple. Block your man until the quarterback can throw the ball. So, what better way to help the offensive line in pass blocking than to reduce the time they have to block for? By adding a true third receiving option to the already lethal duo of wide receivers Stefon Diggs and Adam Thielen, quarterback Kirk Cousins can get the ball out of his hand quicker and end up on the turf far less.

It’s time to move on from the failed Laquon Treadwell experiment. Treadwell was drafted in the first round of the 2016 NFL draft by the Vikings. In his rookie season, he caught one pass for 15 yards. In his second and third season, he did enough to play as WR3 in the Vikings offense. Still, the on-field results were just as disappointing, 55 receptions for 502 yards and only one touchdown over two full seasons. In fact, this past season running back Dalvin Cook was more of a receiving threat, outpacing Treadwell in receptions, receiving yards, receiving touchdowns, and catch rate. That’s right – even without counting everything he did as a runner, Cook was a better receiver than Treadwell. For comparison’s sake, the NFC North Champion Chicago Bears had their WR3, Anthony Miller, net 33 receptions for 423 yards and seven touchdowns in his rookie year. 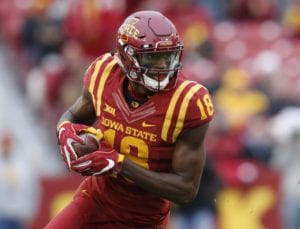 Miller was drafted by the Bears at the end of the second round in the 2018 NFL Draft. While potential superstar wide receivers go in round one, NFL teams can still pick up quality receivers in the later rounds. Dallas Cowboys wide receiver Michael Gallup is another example. After being drafted in the third round, Gallup’s 507 yards and 2 touchdowns in his rookie season also eclipsed Treadwell’s production over three years.

By looking at guys who can play outside the numbers, the Vikings could move Thielen or Diggs into the slot receiver position. Doing so would not only give Cousins another receiving option, but allow his best options to play close to the line – neutralizing pass rushes with reliable short yardage completions. Kevin Gendron of PurplePTSD’s very own Vikings on the Clock Podcast has a few thoughts on the move. In the second round he likes targeting Kelvin Harmon, who was one of the ACC’s most productive receivers in his time at North Carolina State. Harmon can be a lethal threat on the perimeter and shows an ability to rack up scores with 16 touchdowns over three years in college. Iowa State’s Hakeem Butler is another option. Butler also has the ability to play outside, where his strength comes in pulling down contested catches. However, Butler was a large part of the Cyclone offense for only two years, and may need more time to develop into a real threat in the NFL. Still, the Vikings don’t need a superstar WR1, and as such Butler should be available at a discount in the later rounds. Kevin Gendron projects that he will be available in the third or fourth round of the NFL Draft.

Draft an Absolute Bruiser of a Running Back

The Vikings will have somewhat of a gap at running back with Latavius Murray expected to hit Free Agency. As of this writing, Dalvin Cook, Mike Boone, and Roc Thomas are the only running backs under contract for the 2019 season. All three are under 6 feet tall and only Cook weighs more than 200 pounds. To let the offensive line attack the defense, using their strength to push back opposing lineman and establish their dominance in the trenches, it is imperative that the Vikings find a young, heavy, muscular running back to act as their battering ram.

Again, the Vikings would find themselves zigging where the NFL zags. While other teams are placing a premium on undersized pass-catching backs in the vein of Alvin Kamara or James White, the Vikings can find a value by going for an old-school style of running back in the latter rounds of the draft. 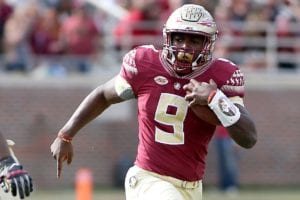 Jacques Patrick is not afraid to hit the defense

Jacques Patrick out of Florida State is 6-3 and weighs in at 234 pounds of muscle. He could be the perfect compliment to Dalvin Cook, just as he was in college. Patrick would be asked to come into the game with fresh legs, resting while Cook played and run up the middle. He routinely ran guys over in college and was able to convert first downs in short yardage situations, or touchdowns in goal-to-go situations. But most importantly for our offensive line, he’s not afraid to hit the defense. Running him head first into a defensive lineman for a 3 yard gain won’t look sexy on the stat sheet, but it’ll make the defender think twice about committing to the pass rush, especially on those crucial 3rd and short plays the Vikings struggled with in 2018. Lastly, it could be argued that Patrick played better when paired with Cook in Florida State. In 2016, Patrick averaged 5.7 yards per run. Without Cook, Patrick averaged 3.5 yards per run in 2018.

The Vikings should reunite this dynamic duo, and in the process give the Offensive Line an aggressive back to beat up the opposition. Jacques Patrick currently projects as a fifth round pick.