Should We All Pump The Brakes On The “Tay Train”? 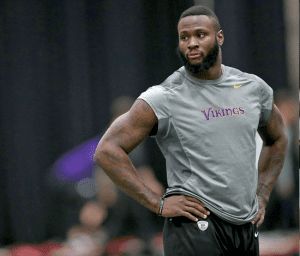 When Dalvin Cook went down in the 3rd quarter of the Vikings’ week four bout with the Lions, there were fears that the running game would fall away entirely. Vikings fans were in a particularly nihilistic mood with Sam Bradford’s infamous knee enshrouded in mystery and the wounds from an injury-defined 2016 season still fresh. Since then, however, the tandem of Jerick McKinnon and Latavius Murray has been a pleasantly competent surprise. The Vikings, led mostly by that tandem, have achieved 133 rushing yards per game, and it’s hard to complain about an offense that has rattled off six straight wins. The “Tay Train” gained steam last week when Latavius Murray rumbled in two short-range touchdowns en route to a 24-7 walloping of a fellow NFC contender.

But let’s not get ahead of ourselves. While Murray has adequately performed the role insofar as he hasn’t visibly derailed any drives, his performance is certainly a weak point on the offense. Despite Murray’s two TDs and pushing a 100 yard day, Murray was only successful on 7 of his 17 touches. The other ten never top three yards. That’s an explosive, but highly inefficient run game. As we’re all too familiar with, the explosiveness isn’t reliable, but the inefficiency is. And the inefficiency can be highly impactful in the future.

Unfortunately, Murray’s game this year has been fighting with itself. Murray’s best results have come on outside runs, but those runs are the least frequent. Runs up the middle, in between the A-gaps, have accounted for 34 of Murray’s carries, the most frequent direction. On these, he’s averaged just 2.7 yards per carry and a 41% success rate. 41% could be worse, but it offers more harm than good.

Why is this? Mainly because Murray is in the bottom tier of frequently used running backs in terms of forcing missed tackles. Per PFF’s “Elusive Rating,” a cocktail of yards-after-contact and forced missed tackles, Murray ranks 41st of 48 qualifying backs. His yards after contact ranks 44th. All this is to illustrate Murray’s lack of production after the offensive line and play design have helped him. He’s one of the worst in the league at making the first man (or any man, for that matter) miss. Regardless of “style,” a running back who can’t elude a tackle means your offense will always be limited to what the play design and blocking can create.

We have to ask ourselves where a running back separates himself from other running backs. While total yards and touchdowns look nice on a fantasy scoreboard, we have to ask ourselves if Murray is offering anything that other running backs cannot in similar situations. Most running backs can successfully run where they’re supposed to on a designed play. It’s after you’ve gotten beyond the designed play, or if the play breaks down, where you’re judged as a runner. Murray has consistently shown himself to be limited to what the play design gets him. Sometimes, that’s a burst of chunk yardage or a breakaway touchdown. But who is really earning that production? We don’t want to be in a situation where we’re expecting the offensive line to open up huge holes for a running back that can’t produce in any other context.

Murray has only been targeted 8 times in the passing game, but offers his relatively famous skills in pass protection. This is a relevant contribution, but it doesn’t overshadow his inability to create in the run game.

It’s not all bad. Per this chart (shoutout to @Nemock7 on Twitter), Murray has been trending upwards in the last two games. Perhaps there’s hope that as the year wears on, Murray will continue to get comfortable in his new offense and heal his surgically repaired ankle. But, as the Rams game shows, his production in overall yards and touchdowns lie to us about his ability to replicate these results in the future. 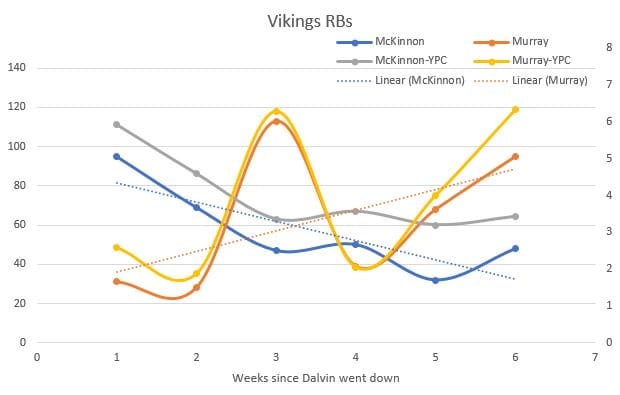 If you’re willing to ignore the poor correlation that touchdowns have to future success, the inability of Latavius Murray to make defenders miss anywhere on the field, and his general lack of efficiency, you could say Murray is having a nice year. But for the rest of us, we can appreciate his contribution as one that is decent for a backup.