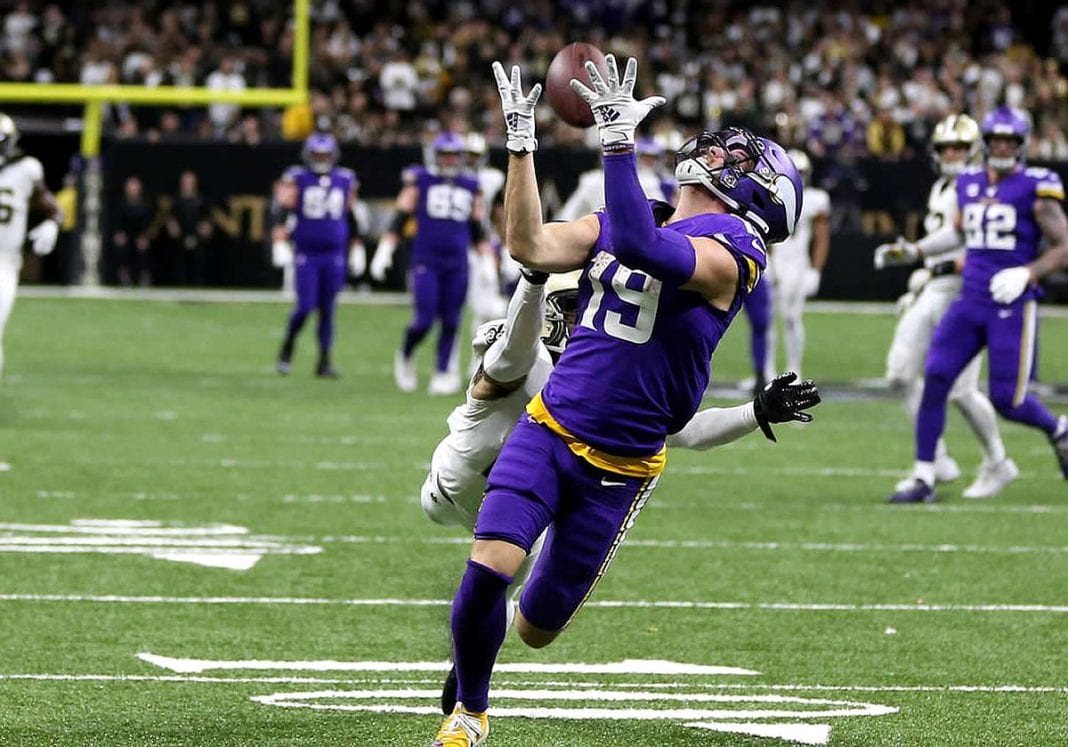 Perhaps it was this that made the New Orleans Saints coaches turn their attention from Adam Thielen to Stefon Diggs on Sunday. A crucial fumble in a 2018 game that absolutely turned the game around in favor of the Saints in US Bank Stadium.

No? Then perhaps it was the fact that Thielen, after straining his hamstring in a Week 7 game against the Detroit Lions, had been out nearly two months and was returning to form slowly, catching only three passes in games against the Chargers and Packers and being held out completely in Week 17.

——— *Editor’s Note: This article comes from ‘The V61’ (vikings61.com) a new website devoted to news, analysis, and history of the Minnesota Vikings! Bookmark The V61 (friend and partner of Vikings Territory and Purple PTSD) and follow them on Twitter and Facebook here! ———

Or, maybe it was the fact that he began the Wildcard playoff game in the Superdome on Sunday by doing this…

In fumbling the ball on the Vikings’ third play from scrimmage, Saints defensive coordinator Dennis Allen may have made his mind up for the game; stick a still rusty Thielen with less consideration than the bigger threat in Stefon Diggs.

This strategy worked for some time. Though the Vikings ran the ball well, drives stalled without a consistent passing game and the Saints held a 10-3 lead with time running put in the first half.

Then this little well-known purple ditty happened. Thielen pushes the cornerback off with a nice up-and-out move and is wide open just outside the New Orleans red zone.

Two possessions later, Vikings down 10-6 with 2 minutes left in the second quarter, Thielen hits an open spot in the Saints’ zone and it’s time to ask yourself the last time you’ve seen a Viking receiver that wide open in the middle of the field.

Although Stefon Diggs did indeed get temperamental about his role as decoy, Thielen continued his return to game shape before our very eyes, giving his QB a easy target down to the New Orleans five.

Doing What He Does

While the Saints refused to take the pressure off Diggs, Thielen then started to frustrate the defensive secondary of the Saints with a trademark diving catch in the third quarter between corner and safety, a play that set off emotional sparks on the New Orleans sideline.

At this point, Allen may have begun to regret his decision to overlook number 19. Clearly the former All-Pro had focused his game after that first quarter gaffe and was intent on taking the contest over with a newly re-formed aerial relationship with Kirk Cousins.

In overtime, the Vikings absolutely returned to mid-season form. They ran the ball effectively with Dalvin Cook and set up a play-action fake that won the game for them in the form of a bomb to Thielen that put them on the Saints two-yard line.

The single high safety, still concerned with Stefon Diggs running left, is late to the play. Thielen basket-catches money throw by Kirk Cousins and hugs the football to his numbers.

Three plays later, Cousin puts another perfect pass into the hands of TE Kyle Rudolph and the Vikings are massive upset winners in the Superdowm.

Back In The Saddle

Needless to say, Allen and the Saints regret underestimating Thielen’s hands, legs, and his will to put the first quarter fumble behind him. The won the battle by limiting Diggs but were beaten in the war by Thielen.

Thielen’s performance is certainly one to be celebrated by himself, his team, and his hard-working quarterback, who can, for now, concentrate an important football game without a monkey on his back.

Who knows what might happen with this offense next week if they can somehow get Mr. Diggs into the mix? We all certainly hope they’re working on it.