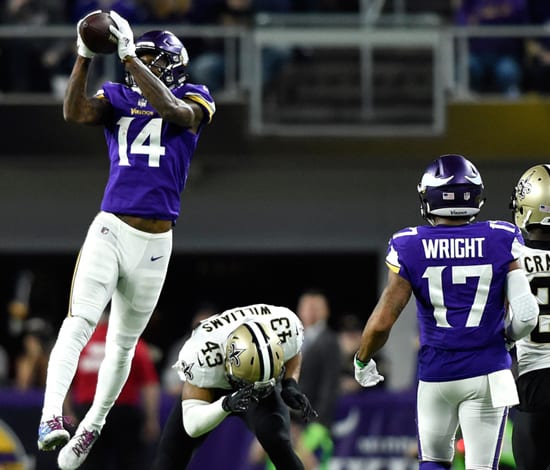 The Vikings have faced several different kinds of quarterbacks this season on their way to a 4-2-1 record and back on top of the NFC North Division. They have squared off against the young (in two Josh’s and a Sam), the young, but established in Goff, Wentz and Garoppolo and the older, familiar and future Hall of Famer in Rodgers. Well, now they get to face the old, short and legendary in Drew Brees of the New Orleans Saints—who at age 39 is rewriting the record books and looking for one more ring before he hangs it up. This is will be the toughest test yet for the Vikings defense.

Many folks will want to look back at the “Minneapolis Miracle” that occurred last January, and, frankly, looking back too much at that terrific finish to the divisional round playoff game between the Saints and the Vikings was what got the Purple in trouble the following week in Philadelphia. So, head coach Mike Zimmer isn’t interested in looking back.

“I think the Saints will come in with a chip on their shoulder because that’s who they are,” Zimmer said when asked if the Saints would be looking back to last season. “I think they are very aggressive on defense, aggressive offensively. They’ve got a very good football team, so I don’t know. That [the Minneapolis Miracle] was a long time ago.”

This year’s game against the Saints, to be contested on Sunday night at U.S. Bank Stadium, will be all about containing the most prolific passer in the history of the game. Brees recently passed Peyton Manning for the NFL record for career passing yards and last week joined Manning, Brett Favre and Tom Brady as the only quarterbacks to reach the 500 mark in career passing touchdowns. He will likely have a few more career records before he retires, and, according to Zimmer, he doesn’t look like he is ready to do so.

“This guy’s amazing,” Zimmer said of Brees. “I always thought when you talk about Hall of Fame quarterbacks, obviously he’s going to be one, but he’s very cerebral, accurate. He’s moving well in the pocket. I was watching tape today on him like, ‘how old is this guy?’ I thought he was getting old, but he moves well in the pocket. He’s not really a runner, but he scrambles and usually he finds guys open. He knows where to go with the football and he’s extremely accurate.”

The New Orleans defense, however, is still what it used to be—that is porous at times and get-able. The Saints defense is 18th in the league in yards (allowing 366.0 per game) and 27th in points (giving up 27. 2 per contest). The Saints are 5-1 and leading the NFC South because they get in a lot of shootouts, and somehow Brees usually finishes on top. In three of their five wins, they won by an average of 3.3 points.

PFF grades the Saints defense as the sixth best team against the run, but they are 31st in coverage, which could give the Vikings an opportunity to break through. There is no doubt that the Saints pass defense will want to erase the memories of the playoff game’s final play and put on a good performance. But instead of Stefon Diggs to worry about, they will also have to account for a very hot Adam Thielen, who was named the best receiver in the league with a grade of 90.9 by PFF last week:

“Six games in a row. Nobody in the Super Bowl era had opened the season with six straight 100-yard games, but that is exactly what Thielen accomplished [Sunday],” PFF said. “From 39 snaps as a receiver, he picked up 123 yards on 11 receptions, giving him a yards per route run average of 3.15. At this point, the big question is how long he can keep the streak going.”

Of course, Thielen did it again with another 100 yard game against the Jets to tie the all-time NFL record at seven games.

At press time, it was early in the week, so there was no telling if Dalvin Cook would be back in the lineup (we have seen him flirt with playing the past two weeks but then benched late with his hamstring injury). The Vikings beat the Saints with and without Cook last season. The same goes for defenders Linval Joseph, Xavier Rhodes, Anthony Barr and left guard Tom Compton, so the lineup could look a lot different come Sunday. The good news is that the team played well without some of these players last week, but they face a more formidable foe in the Saints.

This should be one heck of a game come Sunday. It will require all 60 minutes of great play from the Vikings defense since Brees always plays until the final gun. The season isn’t in the balance for Minnesota, but it will say a lot about where this team is headed if they put down the Saints for the third time in a row. It won’t be easy, but the Vikings will get it done at home on Sunday night.