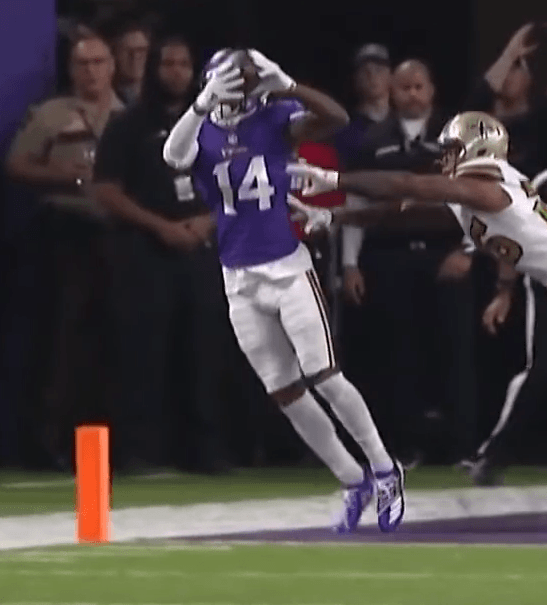 Editor’s Note: Jordan Hawthorn is pinch hitting for Joe Oberle, the regular writer of these purplePTSD.com Game Wraps. Oberle was en route during the game, and his abbreviated game wrap can be found on here on VikingsTerritory.com.

The Minnesota Vikings fell short to the New Orleans Saints this week, 30-20. This game saw the Saints offense do just enough, while the Vikings offense shot itself in the foot multiple times. The number of mistakes kept piling up for the Vikings, and when you play great teams like the Saints, those mistakes will come back to haunt you.

The Vikings’ defense did a lot in this game, holding Drew Brees to 120 yards and handing the veteran quarterback his first pick this season. The defense held the “two-headed monster” running attack of Kamara and Ingram to a total of 108 yards on 26 combined carries. The Vikings defense, with injuries to Anthony Barr, who calls the defensive plays, and Xavier Rhodes held the Saints to under 300 yards and forced a turnover. The game was close and seemed to be swinging aggressively in the Vikings’ favor, but then the Vikings started handing the game to the Saints.

The Saints deny that it was on their mind, but the revenge game narrative was there. The post-game interviews from the Saints’ players have had subtle shots at the Vikings or their fans, so it is apparent they had revenge on the brain. The Saints seemed to be the more motivated team tonight, playing smothering defense and taking advantage of any and all mistakes the Vikings made. The Saints even rolled out former fan favorite Viking quarter back Teddy Bridgewater, which could be seen as playing with Vikings fans’ hearts but was more than likely just a distraction for the running play that was ran. I would love to point out that Trae Waynes was at one point lined up across from Teddy Bridgewater, which is a sentence I never thought I would say in my life.

Adam Thielen is on fire and is now tied with “Megatron” Calvin Johnson for the most consecutive games with 100+ yards receiving. Thielen is making a serious case for why he is the best wide receiver in the NFL this season, posting 822 yards on 67 catches and 5 touchdowns. Thielen is on pace for 1,644 yards, 134 catches, and 10 touchdowns. Those 134 catches? They would put him at the #3 in the record books for catches in a season. Now that we have went through all of the numbers that prove Thielen is the best in the NFL, let me post a picture of Thielen absolutely Moss-ing a defender. 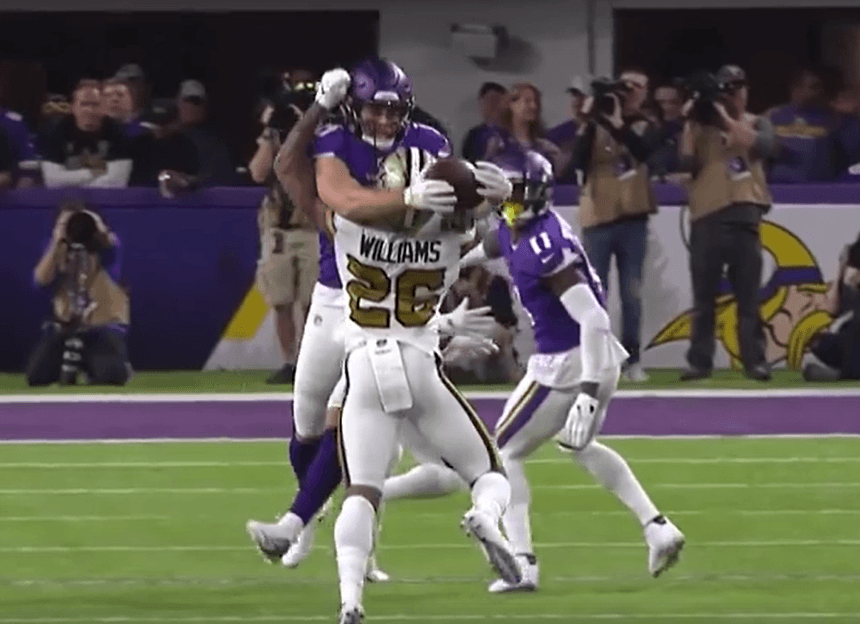 While that is a beautiful catch, you can’t talk about Thielen in this game without talking about his momentum killing fumble before halftime, that was returned into the Saint’s red-zone and would be turned into a Saints touchdown giving them the lead just before halftime.

Stefon Diggs had a good night as well. Diggs put up 119 yards on 10 catches and hauled in a beautiful, toe dragging touchdown catch. Diggs was a solid target for Cousins all night, but again I must bring up that with all the good Diggs did for the offense, Cousins’ pick six was thrown because Diggs stopped running his route at the precise moment Cousins threw the ball to him. The receivers for the Vikings in this game seemed to be what killed the game. Thielen had a big fumble. Diggs had a miscommunication that led to a pick, Treadwell got a dumb unsportsmanlike conduct penalty for spiking his helmet into the turf, and Aldrick Robinson caught a pass that wasn’t a touchdown, which for him is a letdown.

The Vikings’ defense appears to be back in form. The defense has now played 4 impressive games, with this being the most impressive. When you look past the 30 points put up by the Saints, you see the very low amount of yards given up by the defense as well as realize if the offense would’ve protected the ball the defense could’ve had a big-time statement performance. I want to point out a small contributor from this game, Holton Hill. Hill had a couple plays where he was in great position and I though he had an interception on the play before Harrison Smith’s interception.

The offensive line may have given up a few sacks in this game. But the run game was working well before the Saints got a large enough lead that the Vikings had to constantly throw the ball. The line is not an elite unit, and I wouldn’t say they are even top 16 right now. But, when you consider that the line is starting three backups, the line is playing better than expected. Murray had 56 yards on 13 carries and a touchdown. The run game had to be shut down due to a large deficit, but against a good Saints run defense, we moved the ball very well.

The Secondary is one of the most heavily injured positions for the Vikings this year, but the unit held up Sunday night. Holton Hill, Jayron Kearse, George Iloka, and Anthony Harris have all stepped up to be more than occasional role players. The secondary gave up 164 passing yards to one of the best offenses on the league, and I saw Holton Hill make a great tackle in space on a Saint player.

Kyle Rudolph has been under fire from Vikings fans, especially those (like me) who drafted him in a fantasy league. Rudolph hasn’t had the big touchdown numbers we are used to from him, but he is on pace for 564 yards through the air on72 targets. Those numbers don’t jump out at you or win you fantasy games, but when you have two of the best wide receivers in the NFL, getting targeted is a hard thing to do. Rudolph may not be finding the end zone or putting up 800+ yards, but he is making a difference in the run game. Rudy’s blocking game has improved drastically, and the case could be made that he is one of the most well-rounded tight ends in the league.

These batted balls are getting very annoying. Every time I see an open man for Cousins to throw to, the ball bounces off of a defensive lineman’s hand. Cousins was on pace to break the record for most batted balls in a season before this game. He only added two more batted balls, but something needs to be done about it. The offensive linemen have a part in it, but maybe Cousins should pump fake a little more to help decrease the number of batted balls.

Turnovers absolutely killed the Vikings chances in this game. The Saints were very quick to capitalize on the opportunities the Vikings gave them, turning the Thielen fumble into a touchdown and taking the Diggs/Cousins pick to the house. The Vikings haven’t turned the ball over horribly this season, so this was hopefully a one-time occurrence where we just had a bad day. However, if the turnovers persist, this team could find itself on the outside looking in come January.

Throwing beer on opposing players is assault. Don’t do it. The Saints were celebrating a touchdown in their win, and some fans decided to punish them with a pilsner shower. This is something Eagles fans would do, so let’s not. Sorry for being a prune, but assaulting players because they did their job isn’t cool, funny, and will land you banned from the stadium and facing assault charges.

This team needs to get healthy, fast. Injuries could seriously derail this season for the Vikings. The team needs guys like Riley Rieff, Xavier Rhodes, and Andrew Sendejo to come back at full strength and help us make a big-time playoff push.