The 2020 Minnesota Vikings special teams unit was notorious for some subpar play. That team not only was one of the worst teams at returning kicks, but they also couldn’t defend returns. The 2020 Vikings allowed the worst starting field position of any defensive unit, and in large part it was because of ranking among the bottom-10 teams in yards allowed per kick and punt returns.

Similarly, last year’s Vikings squad gave their offense the worst starting field position per drive. They were decent at returning kickoffs, placing 18th by averaging 21.9 yards per kick return. However, they were dreadful at creating yards off punt returns. Minnesota ranked dead last in yards per punt return at a measly 4.3 yards per return.

Oh, and did I mention they had Dan Bailey kicking field goals, who made just 15 of 22 field goals and missed four of his final seven attempts?

Yeah, the Minnesota Vikings special teams unit went into the 2021 offseason in need of a lot of work. The first step was cutting ties with coach Marwan Maalouf. As his replacement, the team promoted Ryan Ficken to the position of special teams coordinator, and Ficken has done nothing but impress.

The biggest thing Ficken did was completely overhaul the personnel of that unit. The Vikings entered 2021 with new returners, place kicker, and punter. After Bailey’s struggles kicking, Greg Joseph has stepped in and done a stand up job–as long as you don’t think too hard about Arizona.

One of the more underrated moves that improved the Vikings special teams came at punter. Jordan Berry has played far better than Britton Colquitt did last year. Colquitt’s punts had a net average of just 38 yards, while Berry has averaged 43 net yards per punt. Colquitt also had a pair of punts blocked last year.

Finally, the Vikings return game has improved drastically. Rookie Kene Nwangwu is a lightning rod for the Vikings special teams as a kick returner. One of the things that made Nwangwu a highly touted prospect out of Iowa State was his ability as a return man, and thus far it has lived up to the hype with a pair of return touchdowns.

Along with Nwangwu, Dede Westbrook has proven to be an excellent punt returner. Westbrook hasn’t had the type of impact as a receiver that we all envisioned, but his impact on special teams is undeniable. The five-year veteran is averaging 8.3 yards per punt return–nearly double what the Vikings averaged last year.

Overall, the proof of the special teams impact and improvement is in the numbers. Minnesota leads the league in yards per kick return, and they have jumped to 14th in yards per punt return. This has helped improve the Vikings average starting field position by over two yards. On average, the Vikings are starting from their own 28.3 rather than the 26.2.

Then on the other side of the ball, the Vikings defense is holding opponents to an average starting field position to their own 27.2 after allowing teams to start from their own 33.9 in 2020. That means the special teams is giving the Vikings defense nearly seven extra yards to work with per drive. That is massive improvement over just one season, especially when you take into account as a whole, special teams buys the Vikings nearly nine extra yards per drive. Bravo, Ryan Ficken, bravo. 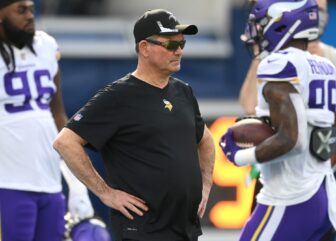