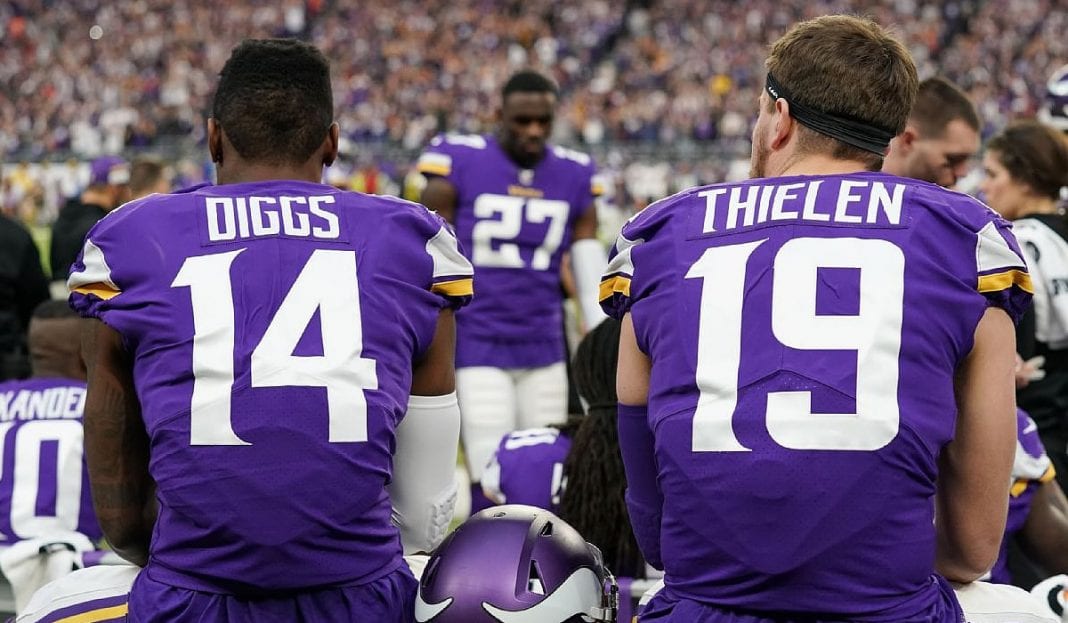 *Note from the Editor: This article comes from ‘The V61′ (Vikings61.com) The V61 is a new Vikings news/content site with some of the best writers in the Vikings media landscape–and a friend and partner of Vikings Territory and Purple PTSD!  Check out their home site and follow The V61 on TWITTER here!

From somewhere in the blog universe, a rumor has surfaced about the Vikings’ front office considering trading WR Stefon Diggs. How did this happen?

Recently the hosts ProFootballTalk, Mike Florio and Chris Simms opened something from their “mailbag” that offered an inquisition about the possibility of the Vikings dealing ace wideout Stefon Diggs.  Florio and Simms puffed out their opinions, which have no relevance here.

What does have relevance to the reality of the 2019 Minnesota Vikings is the notion that some fan–or fans–may have of Stefon Diggs wanting to leave the team.  Meaning, why exactly?

Let me get this straight, the Vikings are 2-1 after crushing Atlanta and Oakland at home, and just missed executing an amazing comeback victory in Green Bay.  In that tough loss, Vikings’ quarterback Kirk Cousins and the offense were in position go ahead late in the fourth quarter at the Green Bay eight yard line when Cousins threw an errant pass to a double-covered Stefon Diggs in the endzone.

The pass was easily intercepted.  Minnesota punted, played superlative defense, and forced the Packers into another second-half three-and-out.

The Vikings then got the ball back. Deciding to throw passes on what would become their last possession of the game (instead of continuing with a remarkably successful run game), they also went three-and-out, kicked the ball back to Green Bay and watched them tough out two first downs to end the game on an Aaron Rodgers kneeldown.

Dance With Who Brung Ya

In that Vikings’ last possession of a first down run and the two passes that followed, the Vikings didn’t even use play-fakes to set up their throws.  On second down, Cousin’s looked to Stefon Diggs on a short out pattern. With Diggs tightly covered, Cousins threw to the opposite side of the field, high over the arms of Adam Thielen, and the ball was nearly intercepted.

Then–on the third down of that last possession, the Viking offense picked a page right out of mid-season 2018.

Cousins again looked left for Diggs, who was running a deeper out pattern just past the first down marker.  The WR slipped on the Lambeau Field turf, forcing Cousins to hurry another pass to a tightly covered Thielen, again high and incomplete.

Minnesota punted and did not get the ball back.

No doubt Vikings’ head coach Mike Zimmer looked at the game tape of that last possession and said to himself and his coaches:  “why in the hell did we stop running?”

The point of this is simple. The Vikings’ offense was a massive failure in 2018, ranking 30th in rushing yards, and 19th in total offense after giving $84M in guaranteed money to a new quarterback. In 2019, they are finding massive success by running the football with a new blocking scheme and several new athletes at the point of that scheme.

Nothing To See Here

Some moron is assuming that because Stefon Diggs was at the point of last season’s offense–and not leading the charge here after three lousy games–that he or the Vikings want a trade to happen?

Stefon Diggs, who has never been selected to the Pro Bowl, but somehow secured a five-year, 72 million dollar contract in the 2018 offseason, wants to leave Minnesota?  That’s 14 million a year!

There has been absolutely no word whatsoever from either the Vikings’ organization or any credible “inside” source that such a negotiation has been considered.

To add a curious insult to such a theory, are the Vikings not ridiculously thin at the wide receiver position, actually having to re-sign a player they had waived a month earlier to fill their roster?

Stefon Diggs is a remarkable athlete, and at age 25, still a slightly immature player. His behavior in Green Bay when he threw off his helmet after a touchdown catch cost the Vikings an extra point that could have been crucial.

But to think that–on the eve of the 30th anniversary of the infamous Herschel Walker trade–the Vikings would deal a guy that’s part of the very fabric of their team is absurd.

For whom? An immature and disgruntled cornerback from Jacksonville?

Sure, dude, come into Minnesota and learn Mike Zimmer’s defense in midseason. We’ll make you our starter on Sunday!

For all the muckraking bloggers out there looking for page views, we get it.  But let’s not be stupid. Right now, this Minnesota Viking team ain’t broke, and nobody’s going to fix it.

That means that Stefon Diggs is going nowhere but back out to the practice and game field to play his part in what is now a winning offense.

VT Updates: Diggs yet again Tweeting about a Trade, Cousins get Extended & More!