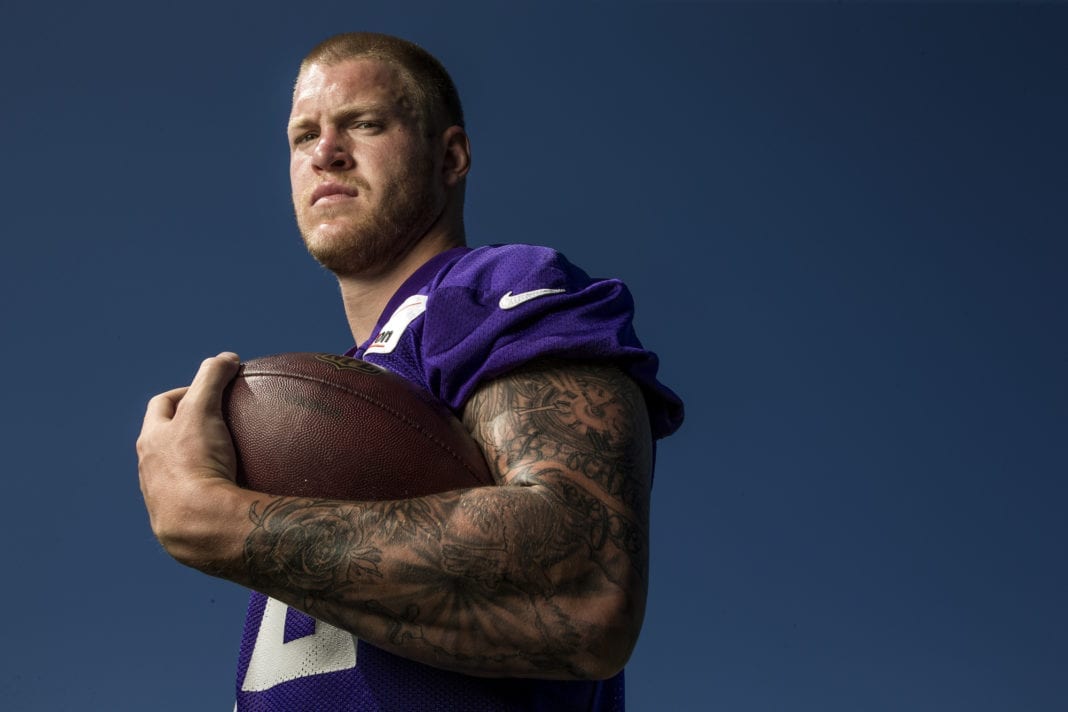 At halftime of the AFC Championship game (one of two very entertaining playoffs games on Sunday) Vikings tight end Kyle Rudolph was announced as the recipient of the NFL’s Walter Payton Man of the Year Charity Challenge. While it is a well-deserved honor for Rudolph, it is important to mention up front that this is not the actual NFL Man of the Year award, which the league will announce during Super Bowl Weekend in two weeks.

Rudolph won the NFL WPMOY Charity Challenge, which was an honor decided by all the fans and people on social media who “voted” for Rudy by tweeting and retweeting his hashtag name for several weeks. Despite the fact that the bigger award will be announced in the future, the Charity Challenge is a great honor and Rudolph deserved to win it.

“My wife Jordan and I are extremely honored to have won the #WPMOYchallenge and also very humbled by the overwhelming support from Vikings fans as well as fans all across the League,” Rudolph tweeted. “You effort will make a difference in the lives of patients and families at @UMNChildrens!”

University of Minnesota Masonic Children’s Hospital is where Rudolph and his wife Jordan did the bulk of their charity work, which helped garner the award. They raised funds for and set up Kyle Rudolph’s End Zone there, which is a 3,000 square foot space where children battling diseases (and sometimes in a battle for their lives) can play and live and endure their long hours in the hospital—alongside family and friends. Rudolph’s brother was born with cancer and Kyle having spent some of those long hours in the hospital as a child himself is where the idea for the End Zone came from—which opened last March. (Check out the “Dear Kyle” video that was made surrounding Rudolph’s work here.)

The End Zone is home to an indoor basketball hoop, a lounge, a small kitchen, a digital sports simulator, a sensory walk/area for patients on the autism spectrum and video game consoles. A place for patients to get some relief from treatments and for family members to spend quality time with them, the End Zone was designed with input from parents of patients. By Rudy winning the Charity Challenge, $25,000 will be contributed to the End Zone in Rudolph’s name.

To win the actual Walter Payton MOY award would mean a heck of a lot more money for the End Zone and other charities. Rudolph will find out in Atlanta, where the Super Bowl is to be held, whether or not he joins two other Minnesota Vikings as winners of the award: Madieu Williams in 2010 and Cris Carter in 1999. It is indeed one of the NFL’s most prestigious awards, and Rudy would join some elite company if he receives the honor.

But if not, he has other plans for Super Bowl weekend. Asked on KFAN radio by Paul Allen if he would stay for the big game if he didn’t receive the MOY, Rudy deferred, saying he didn’t want to stick around watching someone else’s Super Bowl. We like that competitive nature, but we hope he is able to stay as the 2019 Walter Payton Man of the Year recipient. As we said, for all the wonderful work Kyle and Jordan Rudolph do in the community, he definitely deserves it.