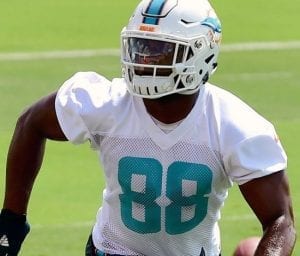 In one of my first ever articles on PurplePTSD, I wrote about Rick Spielman’s draft trade as evaluated by this Harvard trade chart (which I use instead of Jimmy Johnson’s arbitrarily decided values- though the revolutionary idea is his). That chart assigns a point value to each draft position and helps us make sense of trades.

Now that we know which picks we actually received, we have a better idea of the value profit.

The Vikings traded 2016’s #86 pick for 2017’s #86 and #128. The fact that it’s the same pick offers a nice, easy symmetry. Before adjusting for the year, the Vikings essentially profited the #128 pick, or 76.2 points. A common way to adjust for year is to take the deferred picks and shift them a round later. By that metric, the Vikings traded #86 for #120 and #161. By Harvard’s chart, it’s a profit of (139.7 – 107.1) or 32.6, or a 7th round value. Put another way, it’s like converting a #86 pick to somewhere in the mid-30s, or high 2nd round. The profit mainly comes because the pick was split in two without losing all that much value – generally, it’s better to take two bites at the apple especially when draft picks is are volatile and variable.

It’s easier to evaluate trades that involve draft picks when looking at the actual acquired players. For example, the Cordarrelle Patterson trade with the Patriots in 2013, a net loss of 162.5, is put in better perspective when you think of it as a trade of Patterson for Jamie Collins, Logan Ryan, Josh Boyce, and some of LeGarrette Blount (the 7th was used as part of a trade). Similarly, a trade of Gerald Hodges for Nick Easton and Moritz Boehringer is easier to parse for most fans. While it’s important to understand that a trade and selection are two independent moves (trading for #29 is one thing, selecting Patterson is another), it’s interesting to look at the fruits of these deals.

As for this most recent trade, the Dolphins acquired WR Leonte Carroo at a pretty steep price. In 2016, Carroo caught three of six targets for 29 yards, but has a lot of career ahead of him. The Vikings likely wouldn’t have drafted Carroo, but some notable available names were Kyler Fackrell, C.J. Prosise, Rees Odhiambo, and Joe Schobert. Namely, players who would likely be competing (but not anointed) to start at positions of need.

What will his price net the Vikings? Draft analysts and Vikings fans alike will argue over that ad nauseam over the next month. Let’s look at a few mocks and see what this trade could look like a month from now:

As you continue to look through mock drafts, or do your own, it becomes clear how much opportunity this trade provides. From plugging the biggest holes to shoring up the offensive line, any combination of picks at these positions should provide tremendous value. Ask yourself, would you take a trade of Joe Schobert for Pocic and Siragusa? Or Fackrell for Gallman and Kpassagnon? I certainly wouldn’t. The Vikings still have to make good choices at these selections to fill in the gaps, but they’ve undoubtedly given themselves the opportunity to.