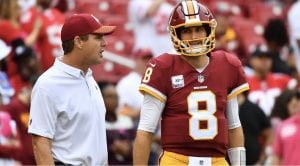 The Vikings lost Offensive coordinator Kevin Stefanski to the Cleveland Browns, and now must replace him before any other off-season moves can be made. Two inhouse candidates make sense, Gary Kubiak (or his son Klint) is likely to take over the vacant position. Fans hoped former beloved coordinator Pat Shurmur would return, but he went further West to mentor Drew Lock in Denver. At the bottom of the short list of candidates; there resides a dark horse, former coach of the Redskins Jay Gruden. A reunion in Minnesota with Quarterback Kirk Cousins could be just enough to continue what the offense started last season.

Jay Gurden coached the Washington Redskins for five years, and Kirk Cousins for about three years. When Cousins became a full time starter, he threw for 25 plus touchdowns and 4,000 yards for three straight seasons. Sean McVay, the current coach of the Rams called plays for Kirk but Gruden was also heavily involved in play design and direction of that offense. When McVay left, and Gruden took over play calling duties and the offense didn’t miss a beat.

Jay Gruden comes from his older brother Jon Gruden’s coaching tree. The other notable name to come from that tree is Super Bowl winning coach Mike Tomlin. This also means Jay is well versed in the Bill Walsh created West Coast offense. The West Coast offense includes a lot of short passes, motions, and screens. Gruden And Cousins implemented the West Coast offenses in Washington and it paid major dividends for the QB who scored a $84 million guaranteed contract in 2018. Assistant head coach Gary Kubiak shouldn’t find any problem meshing the two offensive philosophies, because they are practically the same, and Cousins already knows it inside and out. The decision to hire Gruden almost seems like a given, if he didn’t have to beat out the Kubiaks who are beloved by the staff.

While a reunion in the Minnesota for Kirk and Jay is still speculation, it’s not a big far-fetched idea. With a revamped offensive line this two could cause problems for NFL defenses like they did a couple years ago. This time around, with possible the best arsenal of weapons in the NFL.