What a week! Football is back and in full force. Be careful not to overreact to week one results, as the usually tend to not last more than a few weeks, but  Some things you seen Sunday and Monday you might see all season long.

The Patriots dominated the Steelers on Sunday night, and that was without arguably the best wide receiver in the NFL. It’s going to be a long season for the rest of the NFL if the Patriots can assimilate AB into the culture quickly.

The Saints put on a show in the first Monday night football game of the year.  The defense surrenders 28 points, but Drew Brees turned back the clock again, and leads them to an outstanding comeback victory.

P.S. kickers should be Hall OF Famers. Will Lutz is a baller.

The Chiefs offense didn’t not lose any steam with the injury to Tyreke Hill. Sammy Watkins stepped up in a big way. While they still have rookie Mecole Hardman waiting to make his first big play. The defense is still a weak link, and will continue to be a huge question mark.

Dak Prescott came out and showed the world why he deserves to be one of the highest paid quarterbacks. Granted it was against the giants who don’t have much of a defense, but it was impressive nevertheless.

They escaped with a win on Sunday, but it was ugly. The most encouraging thing for the Rams was the defense showed up and played a decent game. They will need them to continue to be solid if they want to return to the super bowl.

What a turnaround for the Eagles. Jackson is going to be a huge part of this offense that allows them to put up points in a hurry. The pass defense continues to struggle Mightily, but at least the run defense is still intact.

Deshaun Watson went blow for blow with a Hall of Fame quarterback, and that’s all you really need to know about this game. If it  wasn’t known yet, it is now this kid is gonna be special.

If it wasn’t for ultra conservative play calling in the entire second half of the game the Falcons would have been shut out. This was an impressive performance by a good team.

Austin Eckler deserves a round of applause. He showed this team he could be a long term solution at running back. They put up 125 yards without Gordon, but it’s hard to say if that will continue against stiffer competition.

Trubisky put on what had to be a gut wrenching performances to Bears fans. What was expected to be. MVP season for the quarterback has started out in the worst way possible. Luckily he had all season to right the ship with the help of this all pro defense.

Russell Wilson must throw the best deep ball in all of the NFL. He connected with Lockett and Metcalf to keep themselves in the game. The defense struggled

against a short handed Bengals offense, but the addition of Clowney should help the back end.

Lamar Jackson had a career game  against the worst team In the NFL, and it’s by far the biggest overreaction of week one. Not to take away from the accuracy of some of his throws, because they were fantastic. Let’s wait until to see if he can repeat his performance before labeling him a good Quarterback.

Big Ben and the Steelers will be fine. The patriots are a tough team and the best coached team in the NFL. The offensive line is still intact so the offense will be revived. The defense will need to follow suit, or the Steelers won’t have a good season.

The Browns have some issues to take care of, but they will be just fine. Robinson being ejected ruined their chances of winning that game. It’s an entirely new team in Cleveland and it’s going to take some time to gel.

The panthers played in an ugly game against the rams where Cam Newton was unable to get on track. the fact that they were competitive with one of the best teams in the NFL should bode well for their confidence.

Matt Ryan and Julio Jones we’re dominated for 3 quarters, and the Falcons lost rookie Chris Lindstrom in the process. The offensive line is going to have a season long struggle and it’ll hold this team back in a tough divisions

Marcus Mariota came storming out the gates with three touchdowns passes on the first week of the season. There were talks that this could be his last season in a Titans uniform as a starter, he’s here to prove everyone wrong. This defense also looks as if they’re ready to take the next step towards being elite.

A great comeback win orchestrated by Josh Allen should open the eyes of many football fans. This guy is legit, and is going to prove he can be just as good if not better than Baker and Lamar.

It was a fantastic showing by the 49ers, but it got the job done. Two defensive touchdowns in one game is impressive no matter who you face. Unfortunately that won’t happen against the better teams, and this team still has a long way to go.

The Colts hung with the Chargers for the better part of the game, and forced overtime. Everyone thought this team would be lost without Andrew luck, but it looks  like Brisett will do just fine.

Bell was back and in full force, nice to see him back to his normal self, but to lose that game after being up for so long and dominating is heartbreaking.

Letting the Cardinals work their way back into the game after dominating for three quarters just can’t happen. And then not being able to win the game in overtime and ending with a tie is even worse. I’m sure the Lions are very disappointed in the ending of that game.

Round of applause for Andy Dalton. He looked like Carson Palmer out there tossing the ball around against a very well-coached defense. He did this without a couple of linemen and his top target. Hats off to him for that performance.

No AB no problem. Derek Carr looked good and Josh Jacobs looked even better. We should expect them to do this every week, but it was nice to see them have an offense.

The cardinals looked sloppy in the first half of this game and couldn’t get anything done. A simple switch up of the play calling made all the difference. The cardinals will take the tie, because they should have lost the game.

Case Keenum led the Redskins to an early and impressive lead, but the Skins weak defense gave up the lead quick and was never able to help the offense. Another hard loss provided to us by week one of football.

The late Monday night game did not go as expected for the Broncos . Perhaps they underestimated their opponent, because they got worked. Chubb and Miller combining for zero sacks is just inexcusable.

Losing Nick Foles for a long period of time very well may end the Jags season before it really even start. The defense looked gassed, and was gashed for multiple good plays.

When will the Bucs start accepting they need to rebuild the team. Starting at quarterback Winston is not man for the job. His sloppy play and bad interceptions loss the game for the Buccaneers.

It never feels good to get blown out by your division rivals, but expect to see a lot of that for the Giants this year. They looked how must people thought they were, and not even Saqoun can save them from that.

There’s not much to say about the Dolphins. They are in obvious tank mode, and made Lamar Jackson look like an MVP candidate. It’s gonna be a very long season for guys like Howard and Minkah who have no choice but to stick around while they lose just about every game. 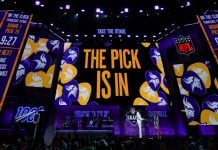