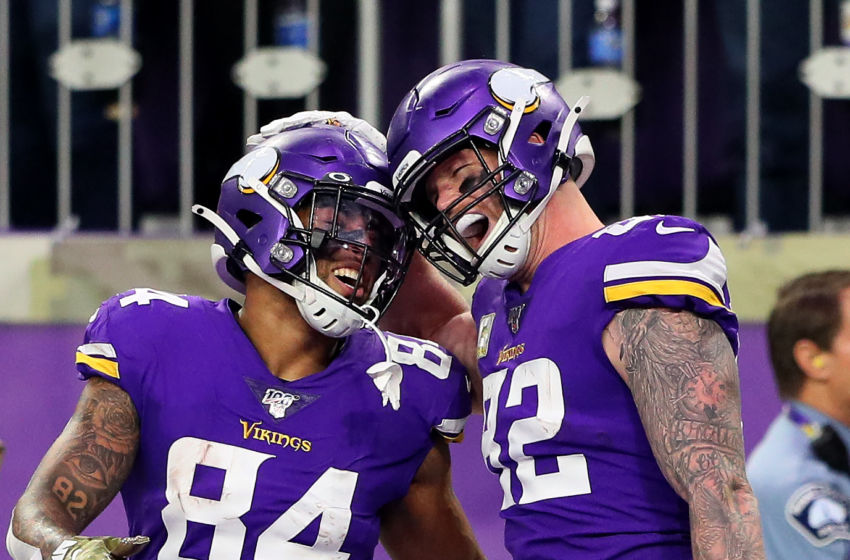 MINNEAPOLIS, MINNESOTA – NOVEMBER 17: Irv Smith Jr. #84 and Kyle Rudolph #82 of the Minnesota Vikings celebrate a touchdown in the fourth quarter against the Denver Broncos at U.S. Bank Stadium on November 17, 2019 in Minneapolis, Minnesota. (Photo by Adam Bettcher/Getty Images)

The following questions are about current Minnesota Vikings topics, answered by PurplePTSD. Today is the May 13th edition, addressed in a from-the-hip fashion. If you have questions, please email them to D.Baker@vikingsterritory.com.

Q: I saw where Pro Football Focus considers Kirk Cousins the most underrated Vikings player. Who would be next after Cousins for this category?

Tomlinson isn’t overly flashy nor a self-promoter, so he doesn’t generate too much hype. But he’s a damn good football player. And he’ll move back to nose tackle inside the Vikings new 3-4 defense in 2022.

Q: After the draft and schedule release, do the Vikings still have an 8-9 win ceiling?

A: All of the eight and nine-win hubbub is from sportsbooks.

The Vikings ceiling is higher than nine wins, but oddsmakers will believe it when they see it. You can shoot for the stars with your projections, but the general population classifies the Vikings as a mediocre football team.

Q: Do you think the Vikings will sign Kyle Rudolph as TE2 before the start of the regular season?

A: If Mike Zimmer and Rick Spielman were still in charge, yes. Otherwise, probably not.

We predict Rudolph will sign with a contender like the Bengals, Chiefs, or Broncos. Rejoining the Vikings wouldn’t be drop-dead surprising, but the men in charge are new. The era of welcoming back former players from the Spielman regime is likely done.