The “QB Carousel” Effect on the Vikings 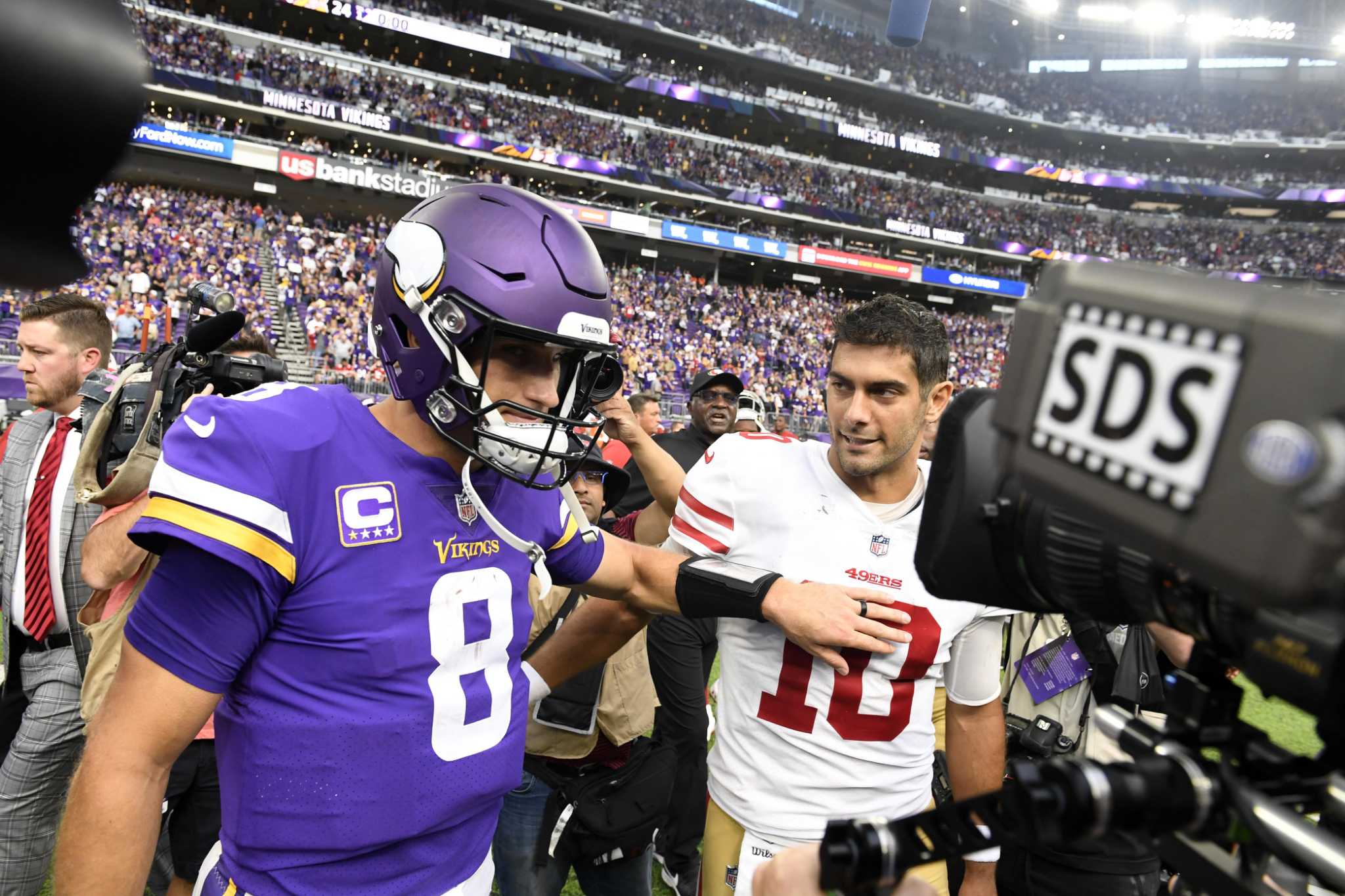 MINNEAPOLIS, MN – SEPTEMBER 09: Kirk Cousins #8 of the Minnesota Vikings and Jimmy Garoppolo #10 of the San Francisco 49ers greet each other on the field after the game at U.S. Bank Stadium on September 9, 2018 in Minneapolis, Minnesota. The Vikings defeated the 49ers 24-16. (Photo by Hannah Foslien/Getty Images)

The Minnesota Vikings will probably avoid direct involvement in the oft-discussed “quarterback carousel” that is allegedly set to invade the NFL. So far, quarterbacks Matthew Stafford, Jared Goff, and Carson Wentz were engulfed by change, and each man will lead a new team in 2021. Media outlets attempted to finagle Vikings quarterback Kirk Cousins into the whirligig of quarterback movement, but for now, those were merely a hodgepodge of rumors.

NFL executives theorize that north of 15 signal-callers could find new homes before September. If that is accurate, the league on the brink of a total quarterback typhoon. And the squall will continue – if this forecast is accurate – when free agency begins in two weeks.

Trades, signings, and draft picks – those are the modes to actionize the upcoming carousel. Players like Dak Prescott, Jameis Winston, Alex Smith, Cam Newton, and Andy Dalton are all free agents. Prescott will likely resume his full-time job of QB1 in Dallas whereas the other free-agent passers will dabble in QB1-QB2 dealings.

Overall, how does the so-called quarterback carousel affect the Vikings?

The Bears on the Carousel

The number-one-with-a-bullet domino pertaining to this carousel and the Vikings involves the Chicago Bears.

For context, the Green Bay Packers are assuredly committed to Aaron Rodgers for at least another season, although Rodgers was rather melancholy and uncertain about his future following Green Bay’s loss to Tampa Bay in the 2020 NFC Championship. As for the Lions, they already rode the carousel and acquired the services of Jared Goff and a king’s ransom in exchange for long-timer Matthew Stafford to the Los Angeles Rams.

Check those division mates off the list. But not the Bears. They are firmly in play to mount the merry-go-round. Nick Foles is the only starting-caliber quarterback on the Bears depth chart (Mitchell Trubisky is an unrestricted free agent), and it is unlikely that Chicago would consider Foles an end-all option for 2021.

Chicago will finally pick in the 1st Round of a draft again this April after a two-year hiatus due to the Khalil Mack trade. The team might trade up from its 20th spot on that night for a QB1 of the future, select a quarterback organically at No. 20, or do nothing. If they do nothing, then a free-agent quarterback would have been signed about a month before. And that could be Alex Smith-like or Cam Newton-like players.

What’s more, when Russell Wilson recently expressed his continually-evolving disillusionment with the Seattle Seahawks, he dropped the Bears as a potential trade destination that he would enjoy. So, keep an eye on that longshot.

Implications for the Rest of 2021 Schedule

The Vikings will already be mightily affected by the 2021 quarterback carousel. Chicago will do something¸ and the Vikings religiously play the Bears twice per year. Let’s assume that the Russell Wilson buzz will not result in a trade. Even then – the Vikings will still encounter a flurry of new faces at quarterback on opposing teams. The Panthers will employ someone not named Teddy Bridgewater. The San Francisco 49ers are wishy-washy in their true commitment to Jimmy Garoppolo. The Lions already boogied on the carousel dancefloor. The Vikings will also play Stafford’s Rams in 2021.

That’s [most likely]  seven games against opponents with new quarterbacks and perhaps more if extremely wild stuff comes to fruition in March and April. Assuming the NFL expands to a 17-game season as predicted, at least 41% of Vikings games will be directly affected by offseason quarterback movement.

And, Of Course, Cousins Whispers

Each time a puzzle piece in the league’s quarterback labyrinth is pressed into place, the dust of a Cousins trade will kick up all over again. This was evident when Stafford was bartered to California and when Wentz was afforded a second chance in Indiana. It gets brains ticking – “what can the Vikings get for Kirk Cousins in comparison to these other trade packages?” is the mentality.

The behind-the-scenes sentiment of a Cousins trade will not be existent for Vikings brass, but the rumors and hype will flare up. It’s The Digital Age.

This will be particularly demonstrative when the 49ers are in the mix for trade talks. Folks love to send Cousins westward in trade rumors because of the two-year connection to San Francisco’s head coach Kyle Shanahan.