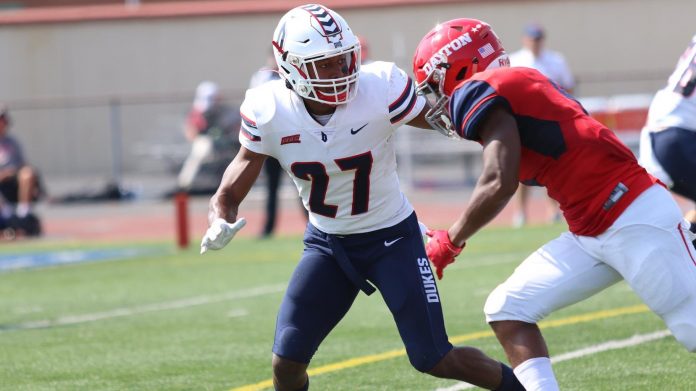 “So with knowing how much I put into it leading up to the game, I shouldn’t think anything else but to dominate.“

ME: “We are about 50 days out from the Draft, how have you been preparing?”

ME: “How has your preparation gone thus far?”

REID: “It’s been going well! Michael Johnson Performance is one of a kind. All the preparation, science and thought they put into everything from the workout to recovery to caring for the athletes is great. Driven Elite is one of a kind as well because not everyday you get to be trained by a should-be Hall of Famer in Donald Driver. He and his staff are very invested in their athletes as well as the people in regular class sessions. To be able to pick his brain about anything and everything football and for him to be as willing to give us all that he knows is a blessing. And then Clay Mack is Clay Mack. There’s a reason every year his clientele of NFL DBs continues to grow. He’s truly a phenomenal DB coach who pays great detail to the little things to air you the best DB you can be.  Raymond is just a one in a million sprint guru.”

ME: “What does the week before a game consist of for you?”

REID: “Personally, each day I’ll do 200 sit ups and push ups broken up to 100 morning, 100 at night. In college I’d go to class then as a team we’d have film study then practice. After practice I’d go home, watch about 1-2hrs of film, do any homework I had, stretch, finish my set of 200 for the day, then go to bed. Film is a huge part of my routine because the more you study your opponent, the more of an edge you have against your opponent. I also focus on my extra physical activity to keep my body as strong and durable as possible.”

ME: “What’s your mentality while on the field?”

REID: “Dominate. I strive to dominate my opponent both physically and mentally and capitalize on every possible opportunity. I say that because I know I’ve done the film study, I know I’ve done all the extra things I could off the field to get my body as best as possible for game day. So with knowing how much I put into it leading up to the game, I shouldn’t think anything else but to dominate.”

ME: “What is something that you believe you excel at as a corner?”

REID: “My technique and my knowledge of the game. I’ve been working on my technique since the 7th grade with people like Clay Mack, Jay Valai (DB coach at the University of Texas), Larry Brown (Cowboys Super Bowl XXX MVP), and Kevin Mathis (ex-NFL CB). So, having people like that who were and still are generous enough to help me with any CB question I have + willing to train me is a huge blessing. All that to say I’m very confident in my technique because I’ve been trained by successful DBs who have a great amount of knowledge on that position. I believe that I also excel in my knowledge of the game because of those same people I mentioned. They taught me how to truly watch film and analyze it so that: 1. Not every play is a new play 2. So that the game slows down and you can have that extra step which can be the difference between a INT or just a PBU. Things like tendencies of the offense, how a certain WR lines up when the ball is coming to him, if he leans more forward on deep routes and or leans back on screens, things like that.”

ME: “What is something that you are trying to improve upon at your position?”

REID: “One thing that I’ve been trying to improve on is getting off of blocks on broken plays or when the QB is scrambling and decides to run. Because I’m looking at the man throughout the route and don’t always know when it’s a run or pass because I have my man. So just learning how to get off that block more consistently I would say.”

ME: “If you have to compare yourself/your play style to an existing pro, who would you choose? And why?”

REID: “If I had to compare myself, I would have to say Chris Harris Jr.  I choose him because he’s the same build as I am at 5’10, about 185-190 range and he’s a great. He’s been one of the most consistent, All Pro CB/Nickel players for as long as I can remember. He’s very technical in his game and makes plays when needed.”

ME: “What was the adjustment from Boise State to Duquesne like?”

REID: “It’s definitely different. Going from a well known powerhouse FBS like Boise State to a not so known place like Duquesne is an adjustment in regards to the resources available, the funding as well as you have a lot smaller crowd as games. But one thing that surprised me is that there were and are players on that team that could start at the FBS level without a doubt (and some did).”

ME: “What sets you apart from the rest of the corners in this class?”

-I shut down both slot & outside WRs.  I also enjoy setting the edge in the run game against TEs.

-I am gifted with elite quicks which allows me to use my feet to dictate where receivers go.

-As for Production, I gave up NO TDs in 2 starting seasons at Duquesne, very few receptions and I pride myself on being a sure tackler.

-Maybe most importantly, I have always represented my family, community & school well.  I am a leader on and off the field and am very proud to have been voted a captain at Duquesne as a transfer.”

ME: “What are some goals of yours?”

ME: “You were teammates with current Vikings RB Alexander Mattison at Boise State, is there anything you remember or want to share about him?”

REID: “He’s extremely intelligent, focused and driven and has been that way since our freshman year. He was always doing extra and knew his end goal was to make it to the NFL which he’s done. He’s also a great person off the field too.”

I want to give a big thank you to Reid for his time and for conducting this interview! Us here at PurplePTSD and VikingsTerritory wish him the best of luck at the Draft in April!