Picking 53: Getting Production from the Most Overlooked Part of the Defense 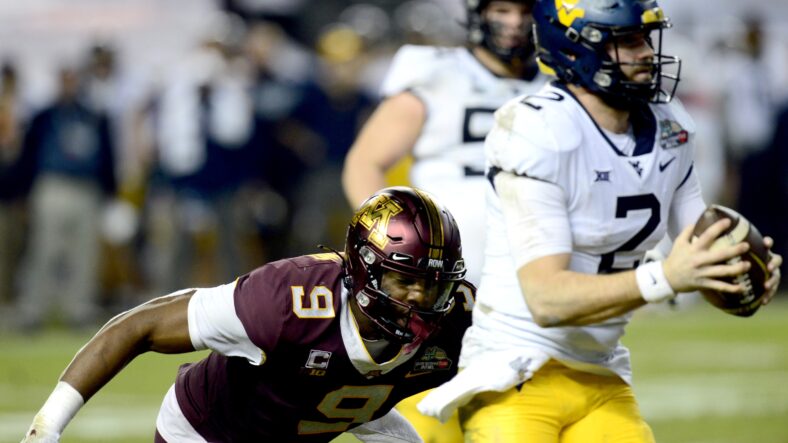 It’s possible that the most overlooked part of the Vikings’ 3-4 defense is at defensive end. Admittedly, the position distinction gets a little muddy in this scheme. In a 4-3, there will be two DTs and two DEs. In Ed Donatell’s 3-4, there will commonly just be two players in a three point stance. One may be lined up over a center and the other over a guard, so they’re not in a DE spot.

However, when Minnesota is in their base formation, they’ll have a player (or two, perhaps) at DE. The 5-technique position is one that will be more prominent than past seasons. Who will be lining up here?

First, a few words on the 5T position. Weekly Spiral offers some insight on the position: “5-techniques align on the outside shoulder of the offensive tackle […] the 5-technique has to be sturdy in run defense while still having pass rush ability.” Indeed, remaining strong in run defense will be the main responsibility. Donatell will gladly accept someone who can also get after the QB, but the Vikings will have three defensive linemen on the field when they’re looking to slow the run.

Currently, the Vikings have a handful of players competing for this job. Some of the Vikings depth charts are a little jumbled since the OLBs and DEs are sometimes mixed together. From what I can gather, Esezi Otomewo, Jonathan Bullard, and Jullian Taylor are in the mix at DE. Undersized DTs like James Lynch and Jaylen Twyman may also get kicked out to 5T.

In many ways, Otomewo looks like the favorite. He’s a draft pick of the current regime, so the leadership obviously likes him. The 23-year-old is 6’6, 282. At various points during the offseason, he has gotten some hype as a player who will surprise Vikings fans. Even if he ends up on the field in Minnesota’s base defense, Otomewo won’t get in on too many snaps in 2022. Most of the time, Minnesota will be in their nickel defense, so it’ll be two DTs who are on the field.

Bullard is almost 29 and hasn’t had strong PFF grades at any point in his six-year career. Taylor is 27. The last time he shows up in the PFF grades is in 2019 where he put together a 67.9 grade. So, far from dominant, but solid. He was only in on 54 run snaps and 47 pass rush snaps, though. To have a chance, Bullard and Taylor will need to be show versatility and a great work ethic. Coaches like depth players who are capable of doing multiple things and who will always give a 100% effort when filling in.

Since Minnesota will likely retain at least 4 DTs, they’ll probably avoid too many players at DE. Most of their attention will be on guys who can either line up along the interior or along the edge. For this reason, I think they only go with two players: Esezi Otomewo and Jonathan Bullard. I lean toward these two since the former is a draft pick and the latter has played more recently. If the team ends up needing help at 5T during the game, either a depth DT or OLB can pinch hit.