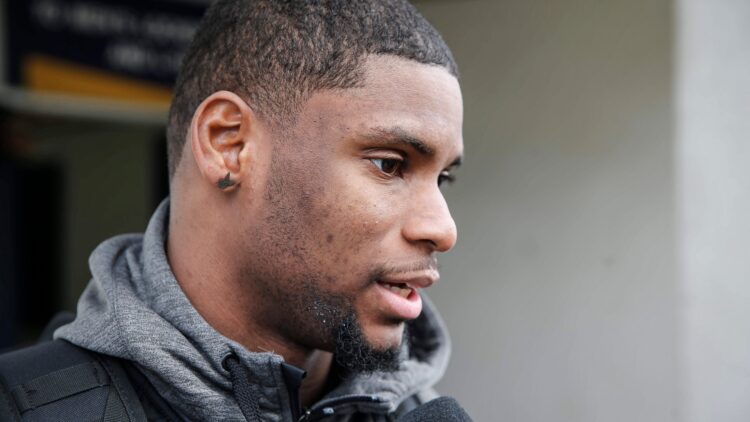 When the Minnesota Vikings selected Ihmir Smith-Marsette from the 5th Round of the 2021 NFL Draft, the University of Iowa wide receiver was an immediately fascinating prospect. After all, six years ago, the Vikings famously found Stefon Diggs in the 5th Round, and he turned out to be a stud.

So, Smith-Marsette is obviously destined for the same batch of stardom as Diggs. Well, no, but the hints of it live in Vikings loyalists’ brains. Any wide receiver that is fast — as is Smith-Marsette — creates instant pizazz for fans because speed puts butts in seats, fantasy points into box scores, and big plays on television screens.

While Smith-Marsette may turn out to be a Diggsian type of pass-catcher, expectations must be lessened as it is extremely rare for 5th-Round players to bust out. Before this week, it was probably even a longshot that Smith-Marsette would steal WR3 duties away from Chad Beebe or Olabisi Johnson.

That changed on Friday, though. VikingsTerritory‘s Sean Borman tweeted:

That’s not a shoo-in for the Iowa rookie to fill WR3 shoes, but it is a damn good precursor to the idea. If the speedster was just another fast-but-not-that-good commodity, Paul Allen likely wouldn’t speculate like this. Indeed, Allen is an eternally enthusiastic fan of the Vikings franchise — often to the extreme — but he is not in the business of spreading falsehoods.

Therefore, there is something to this Smith-Marsette stuff. If he’s turning heads in Eagan, that is a very good omen for his rookie prognosis.

The Vikings need it. Under Mike Zimmer, Minnesota implements a “who cares?” strategy at WR3, at least compared to other teams. Zimmer adores running the football and playing stingy defense, disabling the requirement for a robust WR3. Targets that a different NFL team would generally allocate to a WR3 end up heading in the direction of Dalvin Cook, Vikings tight ends, or some combination of men like Beebe and Johnson for Minnesota.

Minnesota would lose absolutely nothing with the emergence of a WR3 rookie like Smith-Marsette. It would be a long-awaited perk for quarterback Kirk Cousins. In Washington, Cousins did not have two superstar wide receivers like Adam Thielen and Justin Jefferson, but he did usually have about 3-5 dudes that were decent, creating a sense of depth. Sprinkling in a speedy, productive Smith-Marsette would be wondrous for a Vikings offense that will be led by first-year offensive coordinator, Klint Kubiak.

If Allen is incorrect and Beebe or Johnson are not in the cards for WR3 in 2021, Dede Westbrook, Larry Fitzgerald, and Golden Tate are available via free agency.