On The Significance of a Week 11 Win Against the Packers 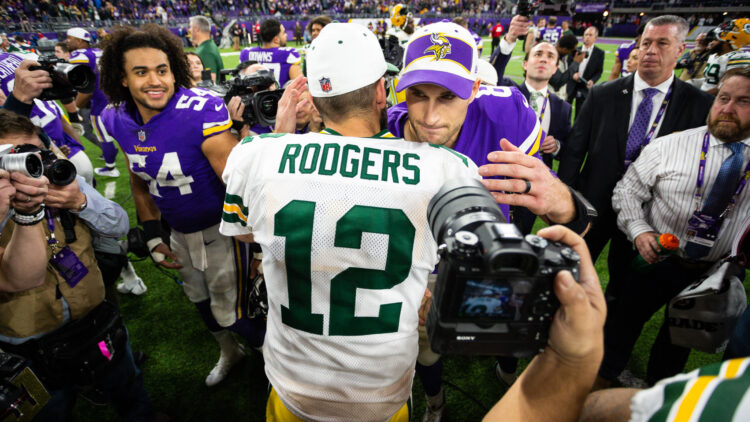 Beating the Packers is always special. If I’m not mistaken, Joe Johnson (the creator of Purple PTSD) used to say that even in bad seasons, he wanted Minnesota to go 2-14 (or 2-15, as the case may be). Sometimes awful seasons are necessary, but getting two wins against the Packers is always the goal. It’s even more special when it appears to get the year back on track. A Vikings victory in their Week 11 match up against the Packers would indeed be reason to get excited. What are the implications of them pulling off the upset at home?

The Vikings and The Week 11 Game Against The Packers

Statistics and numbers are only good insofar as they can accurately help us understand what occurs in reality. As the old saying goes, the game is played on the field, not on the stat sheet. For this reason, I’m always a little tentative when it comes to promoting the oddsmakers. When have our Vikings ever been bound by what ought to happen? I’m sure the oddsmakers would have said Minnesota had a 99% change of beating the Seahawks when Blair Walsh lined up for that short field goal in Zim’s first playoff game. You know what happened from there.

That’s enough negativity. Let’s discuss the positives. Currently, the experts at FiveThirtyEight give Minnesota a 40% chance of making the playoffs. Think about that. Penalties galore in Week 1, a missed kick in Week 2, a no-show in Week 4, and then consecutive heartbreaks in Week 7 & 8. The Vikings, with their 4-5 record, still have a good chance of making the playoffs.

A Week 11 win against the Packers would mean the Vikings have somewhere around a 60% chance of making the playoffs, at least according to FiveThirtyEight. There are some naysayers who aren’t thrilled about the Vikings getting in as a Wild Card, but many fans would be thrilled by Minnesota being able to control its own playoff destiny.

Perhaps more importantly, the Vikings would finally have some legit reason to believe in themselves. Fresh off a great road win against the Chargers, a home win against the Pack would reinforce the belief that this team has what it takes after all.

Of course, a lot of things will need to go right to pull off the upset. Shutting down AJ Dillon is crucial, and the offense will need to show that their strong effort against LA was more than a mere one-off. There’s simply no way that Justin Jefferson and Adam Thielen should be anywhere close to afterthoughts in the game. They both have what it takes to shred an underrated Packers defense. Getting some increased support on defense and then some continued Greg Joseph steadiness may be enough to pull it off. One more thing: I can guarantee GB’s special teams units are nervous about Kene Nwangwu; they should be.

If most of these things go right, the Vikings would be sitting at a somewhat respectable 5-5, in control of their playoff destiny and full of confidence. That’d be reason to have a celebratory drink. For me, it’ll be a tall glass of orange juice with a little pulp, but you should roll with what makes you happy.

A little later today, I’ll tackle the topic of the significance of the Vikings losing their Week 11 game to the Packers. Until then, here is a little more to think about leading up to tomorrow’s game.

Mike Zimmer – love him or hate him – has gotten as far as he has largely because of his stubborn commitment to his vision for his team. At times, that vision has undermined Minnesota’s chances of winning. The 2nd & 10 runs often make me want to do bad things to the television (throwing it out the window comes to mind). Be that as it may, Zim’s vision has also led to some of the greatest moments in team history. 2017, for the most part, was magical. Beating the Saints in OT a couple years later was similarly special.

We’ll soon know if that is enough to get the season back on track.

Also Read: Vikings are Better Off Without Bashaud Breeland