Numbers Check: Some Stats Behind Minnesota’s Loss in Cincy 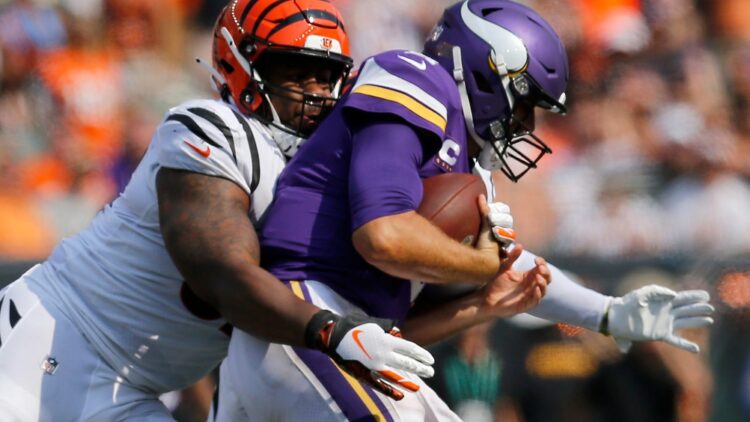 Opening weekend clearly did not go the Vikings’ way as they fell 27-24 to Bengals. It was a rough performance all around with mishaps in every facet of the game. They were never able to establish any sort of presence in the running game, and that is a big takeaway from this loss, especially against a Bengals team that allowed over five yards per carry in 2020. Dalvin Cook finished the game with just 20 carries for 61 yards, averaging a mere three yards per carry. Here are the numbers behind what caused this performance.

The Vikings technically committed a whopping 13 turnovers in the first half of this game, but only 10 of them were accepted by Cincinnati. This was a story to watch from the very beginning of the game as the first snap was called back due a false start by FB C.J. Ham. Ham had two such penalties called on him, and there were three others in this first half. Another notably bad penalty was the DPI called against Bashaud Breeland which set up Cincinnati on the three yard line. They scored their first touchdown of the game two plays later.

Due to the number of penalties committed, the Vikings offense spent much of their time moving backward rather than forward. There were six times where the Vikings set up 20+ yards away from the line of scrimmage. Obviously, it’s tough to justify running the ball when you have to gain large chunks of yards at once. Every series where the Vikings found themselves 20 or more yards away from the line of scrimmage went to third down, and they converted that third down just once. It was a 25-yard catch and run by K.J. Osborne on 3rd and 24. Furthermore, the Vikings had the ball 13 times in this game, meaning they were in these long-yardage situations nearly 50% of the time. It’s tough to win when you can’t hold the field position battle.

Kirk Cousins does not get to escape blame this week. As bad as the offensive line was, Cousins walked his way into multiple mistakes on Sunday. Hesitancy to throw led to balls being put on receivers’ back shoulders and multiple sacks. While he had 49 opportunities to throw, Cousins lacked an assertiveness and willingness to put the ball downfield. He averaged just 7.2 yards per attempt in the loss, and just six of these passes resulted in 15 or more yards. Even then, one of them includes a check down to K.J. Osborne that he ran for 25 yards. When the QB is not going to test the defense, it makes it easier to send multiple guys to run stop.

Obviously this Vikings loss is very concerning. This was supposed to be one of Minnesota’s easier games, so losing this one just makes winning imperative from here on out. To make matters worse, they go to Arizona next week. Chandler Jones had his way with Tennessee this weekend, racking up five sacks against that offensive line. The Vikings need to be much better in the trenches to have a chance in that game. However, the one silver lining is that their top competitor in the NFC North, Green Bay, also lost to the Saints 38-3 on Sunday. The division is still winnable, but Minnesota needs to be much better.