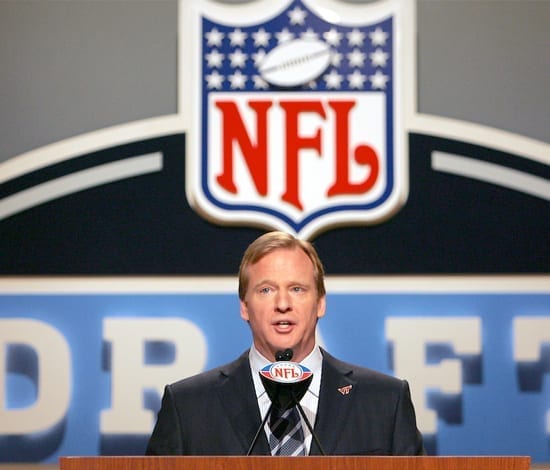 Mock Draft Season (noun) – The time of year when experts from around the league predict the NFL draft and every fan gets upset after reading the result.

I love mock drafts. Although they are rarely accurate when it comes down to it, where they are helpful is laying out which players will be available for your team’s selection. What I’ve found this year (after reading tens of thousands of mocks) is that it is very fluid when it comes to consensus top-prospects (good news for the Vikings at their 18th overall pick). I’ve seen the same prospect taken in the top-10 in one mock, and fall out of the first round in others.

As such, I think Rick Spielman would be wise to trade back if the opportunity presented itself. The player pool from 25-75 is deep and trading down to acquire two potential starters on the offensive line in addition to addressing another position of need seems like an ideal scenario. However, most Vikings fans don’t want to get cute. They’d rather stay at the 18th pick, take an offensive lineman, and move along.

Everyone can have their ‘expert’ opinion going into the draft, but it isn’t that simple, nor is it predictable. The worst case-scenario is to have tunnel vision and pass on a prospect that fell into your lap. A run on quarterbacks or a run on offensive linemen could push some high-end talent back to the Vikings pick. Here are some players that should force Rick Spielman to neglect his need for offensive linemen and sprint to the podium, as well as where they are to be drafted according to some of my favorite draft experts:

Gary seems the least likely to make it to the Vikings pick, but it isn’t impossible. Gary is seen as an EDGE/DT hybrid that has all the ability in the world despite modest college production. He was the number one overall recruit coming out of high school, and if there’s anybody who can get the best out of him, it’s Mike Zimmer and DL Coach Andre Patterson. Gary would be an immediate difference maker with the versatility to either take over Everson Griffen’s spot at DE or Sheldon Richardson’s at DT.

Next up is Ed Oliver, who was receiving Aaron Donald comparisons at the beginning of the season and was widely considered the top prospect prior to his “down” year in 2018. Oliver has the penetrating pass rush skills necessary to be an inside force in Mike Zimmer’s defense and would be a day-one starter in Sheldon Richardson’s spot. Oliver’s size may cause him to fall, in which case the Vikings would reap the benefits.

I’m in the camp of wanting Anthony Barr back, but if he’s gone, Devin White would be quite the plan B. White is considered a top-5 prospect by most, but due to the importance of quarterbacks and pass rushers, he may fall to Minnesota. White would be an every-down linebacker to pair with Eric Kendricks and fill the potential vacancy left by Barr.

We’re now in more realistic territory with Wilkins and the next player averaging over the Vikings draft slot of 18. While Gary, White and Oliver would be considered major steals, Wilkins would not be deemed as such, though he has the pedigree of a top-10 player. Wilkins is coming off a National Championship victory over Alabama, is a disruptive, refined pass-rushing DT, and one of the highest character players in the draft, making him one of the safest picks this year. With the recent torn-ACL to Mississippi State DT Jeffery Simmons, its likely Wilkins will make a leap in updated mocks and his perceived value will be much higher come April.

Enter our first offensive player, TJ Hockenson. Along with Wilkins, Hockenson is valued right around the Vikings pick at 18. Should the Vikings be staring down a top offensive lineman, like Oklahoma’s Cody Ford or Alabama’s Jonah Williams, it’d make sense to go that direction over Hockenson. With that said, the Iowa product makes me curious, especially if the Vikings hold onto Kyle Rudolph this year (which I believe they will do). Hockenson is a human highlight real, logging must-see footage in blocking, catching and after-the-catch ability. He would give Cousins another toy, and with Rudolph, Diggs and Thielen, this passing corps would be filled with mismatches.