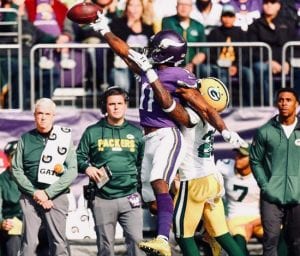 Hidden beneath the drama of the Aaron Rodgers injury and the Packers’ otherwise apocalyptic Sunday afternoon was a major key to the Vikings’ 23-10 victory. The Vikings entered the game banged up, missing their starting quarterback, running back, best wide receiver, left guard, safety and even lost a linebacker mid-game to a concussion. Both teams had holes to fill, and depth that needed to step up. The difference in the game was made by that depth.

The phrase “next man up” is a bit of a cliché in the football world, but often times, it rings true. You can’t turn to free agency or the trade market for every unfortunate injury. The backups are there for a reason. So how did the Vikings’ backups, namely Case Keenum, Jerick McKinnon, Laquon Treadwell, Anthony Harris, Jeremiah Sirles and Emmanuel Lamur perform? Let’s take a look:

Case Keenum
Case will likely be well-documented, and his performance was certainly good enough to score the requisite 20+ points for a Mike Zimmer win. Keenum’s 78.7 QB rating wasn’t quite world-beating, and he missed some memorable throws. Chiefly among those throws was a pass thrown behind Michael Floyd for a tipped interception. This isn’t Keenum’s win, but as NFL.com’s Chris Wesseling put it, he “downshifted to game manager” and displayed the minimum required competence. In a world where teams had to endure Scott Tolzien and, hell, Brett Hundley throwing games away, ‘game manager’ for a win will do.

Jerick McKinnon
Consistency may be key, but with running backs, a little up-and-down can be acceptable. While McKinnon’s second quarter fumble allowed the Packers back into a game that was looking to get out of hand, his aggregate performance propelled an otherwise undermanned offense. But McKinnon’s speed and versatility were showcased on his 27-yard screen touchdown, and he used his short man strength on a 3-yard rushing touchdown. McKinnon’s value post-Dalvin Cook injury cannot be understated, even though he’s been a below average tackle breaker and the team’s rushing success rate has dropped off.

Laquon Treadwell
With no Stefon Diggs, and with Michael Floyd leaving the game with a calf injury, it was do-or-die for Laquon Treadwell. While he didn’t blow up the game a la Thielen or Diggs, Treadwell contributed, and that’s what you need from backups. Treadwell’s 3 catches for 51 yards is a career day for him, which will hopefully become a less hilarious distinction someday.

Anthony Harris
Andrew Sendejo has largely quieted calls for a benching over the last two years, but with no Sendejo, it was time for Harris to show up. Harris wasn’t targeted all day, which may sound like a nullfication but it’s quite the endorsement. The Packers’ inability to pick on an unproven backup safety, and instead being forced to target Harrison Smith and Xavier Rhodes to predictable results.

Jeremiah Sirles
Sometimes, it’s impossible to avoid a dropoff in play when your starter is hurt. While Easton has been up and down, Sirles offered a putrid performance on Sunday, allowing 5 pressures on 39 snaps. The rest of the line was able to make up for it, but if Easton continues to be hurt, it may be time to slide Berger over and give Danny Isidora a look.

Emmanuel Lamur
Lamur didn’t get the start today, but Anthony Barr’s concussion forced him into action. Lamur tallied a run stop on one of his 11 run snaps, which is small, but relevant production for a backup. In coverage, Lamur was not targeted in 26 snaps. It’s less impressive for a linebacker than a member of the secondary, but coming in in relief and not being a liability is an adequate standard for backups. Anything else is gravy.

These backups were largely placeholders- unremarkable filler while the anointed starters rest up and get healthy. But the fact that six backups got significant playing time in a divisional game and only one of them had a profound negative impact is wildly impressive.