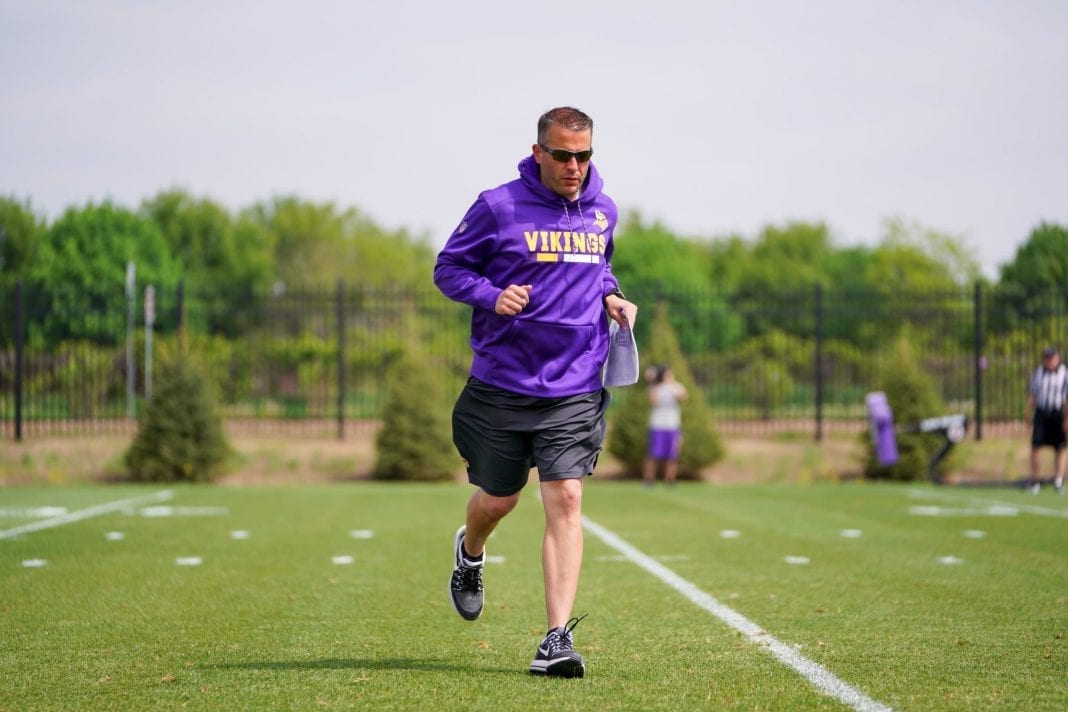 As Training Camp opens Coach DeFilippo takes his first few steps of the 2018 season. Does the trail end with the thrill of victory or the agony of defeat?

I’m on the DeFilippo bandwagon and I’m leaning heavily towards the thrill of victory but, I recognize the reasons for doubt.

That’s reasonable. Very. To set the table let’s take a quick look at some of Coach Shurmur’s stellar work. In 2016, Shurmur coached Sam Bradford into THE NUMBER ONE single season highest QB completion percentage (71.6) of all-time. In 2017, Shurmur coached Case Keenum to a 22-7 TD to INT ratio and a QB rating of 98.3. The team finished 7th in the league in rushing even though they lost stud rookie RB Dalvin Cook for the year in game four. The Vikings finished with a 13-3 regular season record, pocketed an ESPY for “Best Moment” for the ‘Minneapolis Miracle’, and reached the NFC Championship Game.

Basically, Pat Shurmur killed it while he was in Minnesota and parlayed his success into a Head Coaching job with the New York Giants. Big shoes to fill. No question.

Speaking of that 2017 NFC Championship Game… DeFilippo was the QB Coach for the Eagles. They were pretty good!

“But, he wasn’t the Offensive Coordinator. He didn’t call the plays. Head Coach Doug Pedersen did.”

“If the Vikings don’t win the division and make it to the NFC Championship game again that will be viewed as coming up short.”

Wow, you guys are TOUGH but, that’s a good point. It kicks the pressure up a notch.

“The Vikings just gave Kirk Cousins 84 million dollars that is fully guaranteed. That type of  contract completely wipes out any QB excuses. There’s no room for error.”

We can talk about that but, I see your point.

They are all good points. They all also create extreme opportunity. The buzz around the Vikings offense is huge. The pressure is high. Expectations even higher. Is it getting hot in here?

Even with the heat turned up to a boil I certainly can’t be the only one optimistic on Defilippo so, let’s take a look at some positive potential outcomes, some reasons for them, and why they might make this storyline so fun.

When it comes to replacing a master like Shurmur… What if DeFilippo comes through? What an incredible story. The true measure, of course, will be how well the team does but, I started this article looking at numbers so, let’s look at some more. The Vikings finished 10th in the NFL in scoring, 11th in Yards Per Game, and 11th in Passing Yards Per Game. Excellent work, no doubt. Yet, there’s some wiggle room for improvement and growth.

As far as DeFilippo’s time in Philadelphia he was the QB coach. He ran the QB room that developed NFL MVP candidate Carson Wentz and 2017 Super Bowl MVP Nick Foles. Those are two good reasons for optimism. Also, the Vikings finished 5th in Red Zone scoring last year. That’s an impressive stat. Things get tight in the Red Zone and finishing plays there can often decide wins and losses. Want to know who finished 1st? The Eagles did and DeFilippo was the Red Zone coordinator. And, yes, Head Coach Doug Pedersen did call the plays but, keep in mind Doug Pedersen was the Offensive Coordinator for the Kansas City Chiefs before he was the Head Coach/play caller for Philadelphia. Andy Reid was the Head Coach in Kansas City and called most of the plays. Pedersen called some of the plays while he was the Offensive Coordinator there but, really started tearing the NFL up as a play caller once given complete play calling control in Philadelphia. A similar pattern might be in the cards for DeFilippo.

Another reason why DeFilippo might come out of the 2018 season looking like a guru is a potential Dalvin Cook breakthrough. Through four games last year Alvin Kamara (2017 NFL Co-Rookie of the Year) had 103 total yards from scrimmage. Leonard Founette (the number four overall pick of the 2017 draft) had 412 yards. Dalvin Cook was short changed last year due to injury but, through the first three and a half games he played he had 444 total yards. Kamara and Fournette were sensational as rookies. Dalvin Cook might be better. So far, with limited time together it appears Dalvin “The Chef” Cook has been lining up all over the field (including out wide) in early training camp formations. I like the sound of that! In limited action to date, Cook has shown impressive running ability, receiving ability, and solid Red Zone work (fantasy football gold). The Chef’s 2018 full season final stat line will go a long way in determining how successfully DeFilippo is viewed. Honestly, it could be a season for the ages.

But, make no mistake, DeFilippo built his reputation by crushing it where ever he goes at the QB position. As the QB coach in Oakland (2012-2014) he gained respect around the league for his work with Derek Carr. In 2015 he was the Offensive Coordinator for the Cleveland Browns. The team threw for 4,155 yards (fourth-most in franchise history) and Josh McCown had a 12-4 TD to INT ratio with a 93.3 QB rating. We don’t need to review his work in Philadelphia again but, it was brilliant. That leads us to 2018 and Kirk Cousins. If Defilippo can work his magic here the Vikings might have their dream season and DeFilippo will get all the credit he needs to join the list of NFL elite offensive minds. Cousins has been a very good QB to this point. He has been a full time starter for the past three seasons with Washington and has three straight years 4,000+ yards and 25+ TD passes. That’s excellent. It won’t get you into the elite NFL QB club though. Especially, with no playoff wins. But, there’s the opportunity. Maybe even the opportunity of a lifetime… for both DeFilippo and Cousins. Sure, there might be some extra scrutiny thanks to the contract but, if Cousins crushes it this year nobody will care. Can either one of them or both of them join the elite ranks at their positions? That’s part of what’s on the line this year. Huge stats would be nice, people remember that stuff (cough, cough, fantasy football). But, what they both need is playoff wins…. right? Well, the good news is Las Vegas thinks the opportunity will be there. The heaviest hitters in sports betting put the Vikings 2018 regular season win total at 10 for an over/under. That’s good for third in the NFL. Which means the playoffs are a good bet (personally, I’m taking the OVER for the Vikings on 10 wins).

Overall, my prediction for 2018 is John DeFilippo takes his rightful place among the NFL elite offensive minds. But, anything can happen. No matter what happens the DeFilippo storyline for the Vikings is a burner right now and will be all season. I can’t wait to see the shape of a DeFilippo Vikings offense. I can’t wait to see how it pairs up with the NFL’s #1 Defense. I can’t wait to see if Dalvin Cook reigns supreme in Fantasy Football. How does DeFilippo take advantage of Diggs and Thielen? Can DeFilippo work his cutting edge QB process here and if so, what type of numbers can Kirk Cousins in his prime put up in this loaded Vikings offense? How far can they really go in the playoffs if they get there? Will the Vikings have even more questions next offseason?

Last offseason General Manager Rick Spielman and Head Coach Mike Zimmer HAD to have John DeFilippo. He was their guy.

I’m on board the John DeFilippo bandwagon too ~