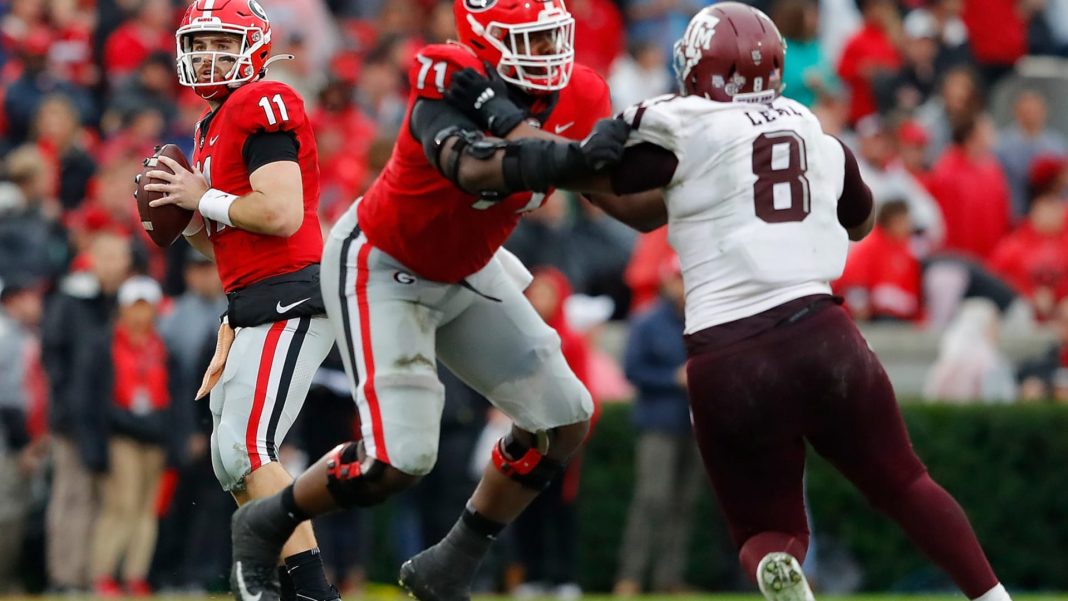 Welcome to the first part of the Mock Monday series, which is going to be a three article, weekly series up until the NFL Draft. The first article will be a full seven round mock draft, the second will take a look at other mock drafts, and the final article will vary each week. Hope y’all will enjoy this new series!

The Explanation: While Thomas does project better in a power/gap blocking scheme, that doesn’t mean he still won’t be a good-great left tackle in our zone scheme. Thomas is gifted with athletic tools that, if properly molded, could finally give the Vikings an elite mainstay at left tackle. Andrew excelled at using his hands and power while blocking the best of the best in the SEC. The only knock to Thomas’ game is his inconsistencies with his balance, footwork, and pass sets, but with improved technique he could almost eliminate these flaws. Thomas is also elite at combo and down blocking, both heavily utilized in 2019 by the Vikings. The Vikes have steadily invested into their interior defensive line, this is relevant because in the limited opportunities that were given to players like Armon Watts, Jaleel Johnson, and Jayln Holmes they performed well. Keeping Ant Harris removes the potential for a Delpit to Minnesota pick. Lastly, Thomas is a better player than Jones, who is more of a scheme fit but a lesser overall player.

The Explanation: Quoting an article written on Madubuike by my friend Ryan Roberts (which you can find here), “I was expecting to see an elite athlete for the position, and I was not disappointed. The kid can scoot! The power he was able to generate, however, took me off guard. He is able to shoot his hands, establish inside leverage, and press offensive line man with ease with his raw power.” I chose Madubuike over Jackson because while the Vikings do need an upgrade at Left Guard, I expect them to attempt to fix that through free agency. Corners Bryce Hall and Jaylon Johnson both make sense here but I am sticking with the best available player in Madubuike. Additionally, Holton Hill and Mike Hughes are expected to take the outside corner positions and I am not entirely sold on Hall or Johnson being a definitive upgrade.

The Explanation: Being that I went with Madubuike over other corners, Troy Pride makes the most sense here. As I will continue to mention, I expect that the Vikings will try to address left guard in March through free agency, which rules out a Biadiaz pick. Darnay Holmes is more of a nickel or slot corner, which depending on Mackenzie Alexander resigning or not, could become a need. Bartch and Anae wouldn’t have as big of an impact as Pride or Holmes, due to their position already targeted with another pick (Bartch’s case) or a current player being better (Anae’s case). Pride’s stock saw a major rise after his performance at the Senior Bowl. The Notre Dame corner is a superb athlete who has very few flaws in his game. Troy excels in man coverage, and has displayed skill against the run. Troy Pride is an excellent corner who fits almost perfectly into the Vikings’ defense as an outside corner.

The Explanation: This was the hardest pick for me, do I go with an improvement at left guard in Lemieux? A vertical threat as third wideout in Cephus or Davis? Or replacements for Rudy or Dalvin in Asiasi and McFarland? I went with Dalvin’s potential replacement for multiple reasons. The first being I find it likely that the Vikings will pursue the guard position in free agency. The second being that this wide receiver class is extremely loaded and deep. Lastly the third pertains to Dalvin’s uncertain status for next year. Going more into depth on the Cook situation, as Tom Pelissero stated, “If Dalvin Cook does not have an extension I definitely wouldn’t expect him to be around the facility this spring.” In a thread I did on my twitter (you can find the thread here) I talked about Alexander Mattison’s potential as Cook’s replacement. In it, I detailed how if Mattison was paired with more of a “slashing,” receiving back, the Vikings run game wouldn’t suffer as badly as one would expect.

The Debate: Brooks over Trevis Gipson and Antonio Gandy-Golden

The Explanation: While Gandy-Golden is a great wide receiver prospect, he isn’t the vertical threat that the Vikings need. Trevis Gipson was almost the pick here due to the Vikings ability to transform defensive end prospects. In the end I choose Maryland safety Antoine Brooks. I went with Brooks because of his versatility and the outgoing production in the Vikings’ secondary with multiple players leaving. Brooks is very versatile, playing everything from subpackage linebacker to nickel corner to safety. The Vikings’ defensive coaches should be able to find a way to utilize Brooks’ skillset, much like what they did with Jayron Kearse. Brooks could be the Minnesota’s version of Jabrill Peppers, and I hope that I witness the ways this revamped Vikings coaching staff can use a player like Brooks.

The Explanation: The Vikings lack speed at wide receiver and the ability to stretch the field on offense, this is where Thomas comes in. A speedster at Miami, Thomas should come be able to come in and take the top off of the defense. Having a deep threat like Thomas would open up everything, from the run game to other receivers. By the safeties having to account for the deep threat that Thomas-as well as Diggs-this takes away the safety help putting the corners in more of a 1v1 situation. One on One matchups against players like Rudy, Irv Smith, Thielen, and Dalvin will be exploitable. Thomas fills a need that hasn’t been addressed, whereas Jackson, Throckmorton, and Anchrum all play positions that have already been upgraded.

The Debate: Taylor over Robert Landers and Colton McKivitz

The Explanation: Taylor is a developmental pick, an unpolished and super athletic player who the Vikings can hopefully mold into a starting linebacker. Taylor is the best available player at this point and his potential is too high to pass on. Landers and McKivitz position’s, IDL and OT, were both addressed with earlier and higher picks.