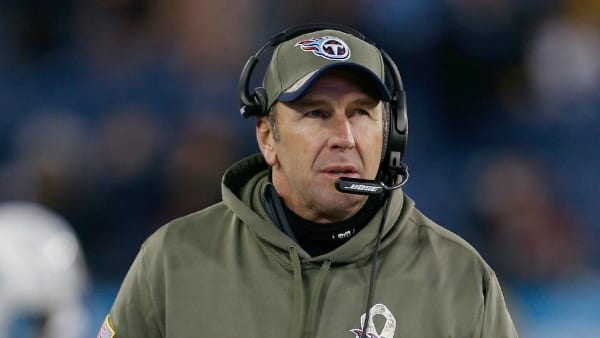 If there was one constant this past season for the Vikings offense it was that it was as underwhelming as it was inconsistent stemming from the fact that there were two different offensive coordinators (both of which are thought of as future head coaches) running the show. So, it should come as no surprise that Mike Zimmer and company are looking for a new offensive coordinator for the team in 2019. The Vikings interim offensive coordinator, Kevin Stefanski, has been interviewed for the Cleveland Browns head coaching position and is rumored to be both leaving and staying with the Vikings organization. With Stefanski potentially out as coordinator, the Vikings have been searching throughout the league for their new playcaller.

Former Cleveland Browns head coach Hue Jackson was said to be a front runner for the job since he had previous experience working with Mike Zimmer while they both coached in Cincinnati for the Bengals. That rumor seemed to be shut down from Mike Zimmer during a press conference earlier last week. He was asked indirectly about Hue Jackson potentially being hired and so Zimmer stated, “I know where you are going with that question, but it’s not a good question. I mean, it’s a good question, but probably you are fishing in the wrong pond.”

Mike Zimmer has emphasized wanting to run the ball not only more often, but more effectively. He believes that both running the football well and utilizing more play action plays will be big keys to beating tough defenses, something the Vikings clearly didn’t do in 2018. Mainly, Zimmer wants a coach that can simply put up more points. Here is a quote from his press conference last week. “I think the biggest thing we’ve got to score more points. We didn’t score enough when we were in the red zone,” Zimmer said. “Obviously, I want to be able to run the football and play action pass because I think that is the most effective way to affect a defense.”

With that in mind, the new front runners for the team seem to be either Mike Mularkey or Dirk Koetter.

Both of these coaches have had success running the football.  Mike Mularkey is the former head coach of the Tennessee Titans and has been known for both running the football more and doing it effectively. He has had successful offenses in the past with the: Pittsburgh Steelers, Buffalo Bills, and Atlanta Falcons. According to Pro Football Reference, Mike Mularkey has had five teams with a top ten scoring offense.  Mike Mularkey could potentially bring offensive line coach, Russ Grimm. Grimm has coached some of the best offensive lines in the past and would be a huge addition for our offensive line and team as a whole. Dirk Koetter, former head coach of the Tampa Bay Buccaneers, may now be a candidate for the offensive coordinator position as well. Dirk Koetter has had three top ten offenses in points scored in his career, according to Pro Football Reference. He’s had successful years as a playcaller in: Jacksonville, Atlanta, and Tampa Bay. Dirk Koetter has had successful rushing offenses throughout his years as an offensive coordinator, as well.

Mike Zimmer wants an offensive coordinator that works well with him, has good offensive line play, runs the ball efficiently, and most importantly puts more points on the scoreboard. Both of these coaches may be able to do those things for the Vikings. Fans may want a more creative offensive minded coach like the rest of the league is looking for (a la Sean McVay of the Los Angeles Rams), however the Vikings are probably more cautious of that since their hiring of John Defilippo didn’t work as they had hoped (neither as a playcaller or apparently his relationship with Zim). The word is that we could be hearing the news very soon on who the Vikings hire, as Kevin Stefanski’s contract is up on Tuesday of this week. No matter who they hire, it will be tough to tell right away whether it was the right move for the organization. Sometimes great looking hires don’t do well (Defilippo) and sometimes not so great looking candidates do well (Pat Shurmur).

Only time will tell. Let’s just hope they make the best decision.