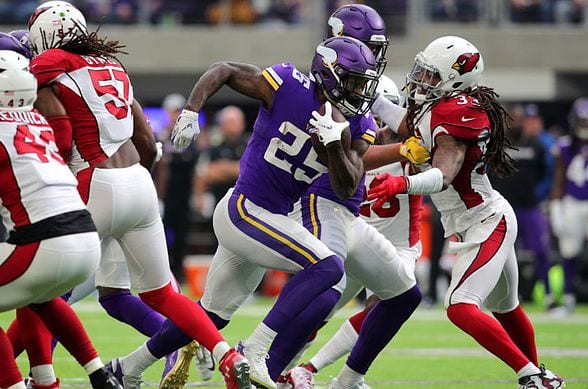 The media was on hand Monday as the Vikings players were cleaning out their lockers and one Viking that the writers focused, for obvious reasons, on was running back Latavius Murray, who is set to become an unrestricted free agent in March of 2019. Murray spoke openly and honestly during that time and touched on the 2018 season first, then got into his plans for 2019 and beyond.

In discussing the up-and-down year that the Vikings had, especially on offense, Murray didn’t hold back, saying: “We truly didn’t know what we wanted to do [on offense]”. That’s a pretty grim and infuriating statement coming from one of the main cogs of this offense, but it’s not surprising. The Vikings obviously moved on from offensive coordinator John DeFilippo a few weeks ago, and while things initially looked great under Kevin Stefanski, it turned out that the amazing results that the Vikings offense was enjoying, namely it’s running game, was basically just benefiting from playing a really bad Dolphins defense, that was particularly bad against the run, more than anything. The last two games of the season, against division rivals Detroit and Chicago, both started with four three-and-outs on offense and it’s something that needs to be corrected before the 2019 season.

The Vikings reportedly moved on from DeFilippo because of his aversion to running the ball. While he should’ve just run the ball to prove it wasn’t working, which is such a strange thing to verbalize considering what it would’ve meant for the Vikings chances in games like the Rams game, which they lost anyway, or at least not abandoned it so quickly in a few games. If anything the final two games of the season vindicated him and most definitely helped his career and self-esteem. That situation clearly shows how frustrating a year it was in general but especially in the run game, something that may have compelled Murray to speak more openly about his role with the team and his future in Minnesota,or lack thereof, as well.

Murray has played a lot more than the Vikings thought he would after they drafted Dalvin Cook in the second round before last season thanks to an ACL tear in his first season, and then a hamstring injury that hamstrung his early season this year (get it?). Perhaps when signing her,e after a good start to his career in Oakland, Murray believed he’d be the feature back, you certainly got that impression before the season last year. Fortunately both Murray and Cook have got on well together personally, although one wonders how different that relationship would’ve been had Cook not been injured. Murray spoke about that relationship in terms of his future with the team and said:

“We’ve both mutually expressed our feelings about me returning, then I think we also understand the business side of it. So right now, time will tell.”

He did say, though, that:

“I want to play. I want to start. I’m not content with being in a backup role…”

That’s not good. However, he did continue:

“I want to compete, and Dalvin [Cook] knows that. We push each other. That’s what it’s about. But I would love to be back here for that opportunity to compete.”

Again, he said, it’s a business decision. However, there’s no reality in which he starts over the immensely talented Dalvin Cook. While Cook could very well end up being a three-down back, he will need to be spelled from time to time, especially if these injuries are a sign of things to come. While the Vikings have some interesting prospects in Roc Thomas and Mike Boone, what they need is a guy of Murray’s size, stature and talent. Hopefully they’ll be able to keep him, but it appears as if the writing is on the wall. The Vikings have limited cap space for next season, and while improving the run game should be at or near the top of the list for the Vikings, most of that should come up front instead of in the backfield (obviously). Look for the Vikings to perhaps draft another running back next season, as there are plenty of teams who would love to have Murray as their feature back, something he’s shown he can do the past season plus.