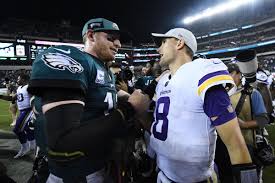 Kirk Daniel Cousins and Carson James Wentz are not bitter rivals, per se. They did, though, cross paths while Cousins led the Washington Football Team’s offense and twice more since he joined the Minnesota Vikings in 2018.

Cousins has been demonic versus the Philadelphia Eagles. In contests against Philadelphia, Cousins has been the fifth-best quarterback the Eagles have played in their 87-year history. His 104.9 passer rating versus Philadelphia is only topped by Philip Rivers, Peyton Manning, Matt Cassel, and Milt Plum (minimum 80 pass attempts).

In his nine games against the Eagles’ Chip Kelly and Doug Pederson-coached units, Cousins has thrown for a total of 2,756 yards, 21 touchdowns, and six interceptions while boasting a 67 percent completion ratio.

Carson Wentz, on the other hand, has been ho-hum versus the Vikings. He and the Eagles took down Minnesota in 2016, which set into motion an all-out collapse of the Vikings 2016 campaign. Minnesota visited Philadelphia during that season asowners of the league’s best record, 5-0. The Eagles downed the Vikings 21-10 on that October day, and in many ways, it would be a wrap on Minnesota’s grand plans for a once-exciting 2016 outlook.

Against the Vikings in three matchups, Wentz has thrown five touchdowns to three interceptions with a 90.1 passer rating. Oddly, Wentz is the only quarterback ever to throw over 300 passing yards against Vikings head coach Mike Zimmer on two separate occasions. Both efforts were losses for the Eagles, but the statistic is noteworthy nevertheless.

So, how do Cousins and Wentz compare statistically?

This analysis will encapsulate the start to each man’s respective career with a two-season parameter (first 32 starts) and then each man’s most recent 32 starts.

All things considered, Cousins and Wentz can be classified asbedfellows amid the infancies of their careers. It should also be noted that Cousins became a full-starter at age 27 after he seized the torch from Robert Griffin III who was beset by chronic injury. Wentz was 24 years of age when he took over the reins in Philadelphia.

Wentz avoided interceptions earlier on and was sacked exponentially more than Cousins.That’s quite the paradox. What’s more, Wentz was blessed with the union of the Philadelphia Eagles – a franchise more recently esteemed and competent than Washington.

Advantage: Probably Wentz by a smidgen – the interceptions are truly the only difference-maker.

The more this statistical sketch is illustrated, the more Cousins and Wentz align from a production perspective. In the last two seasons’ worth of games, there is stagnancy in Wentz’s accuracy progression. Proponents of Wentz will maintain this is derived from the Eagles motley crew of pass-catchers, but Wentz’s completion percentage is exactly the same as his first 32 games. In theory, his accuracy should accelerate rather than remain idle.  However, Wentz’s touchdown total has climbed and his efficiency via passer rating has improved.

Cousins, too, has progressed. With the Vikings, his passer rating has spiked by 10 points on the whole comparative to his time in the nation’s capital. This is likely due to his influx of weaponry with players like Dalvin Cook, Adam Thielen, and Stefon Diggs – a trio of talent that Cousins’ never experienced in Washington.

The most optimistic take on Cousins’ development is his ability to curtail the interceptions. This drop-off from 32 picks (in his first 32 games) to 19 in (his last 32 games) is considerable, to say the least.

Advantage: Cousins by a nose. Wentz, in a bizarre turn of events, has developed a fumbling malady. Meanwhile, Cousins took steps in 2019 to lessen his proclivity for fumbles. Moreover, Cousins’ completion percentage has steadily trended upward whereas Wentz’s has remained static.

Although Wentz is the beholder of a more favorable national reputation, Cousins tops Wentz in overall efficiency. Wentz is younger to the tune of five years than Cousins, and the future for the Eagles signal-caller can be perceived as bright.

In fairness, Wentz maintains a “put a team on his shoulders” reputation more so than Cousins. The merits of this assertion are debatable. An unbiased way to assess this comparison: Wentz could probably the join the Minnesota Vikings garnish comparable success to that of Cousins. If Cousins manned the Eagles huddles, the team would likely see a similar win-loss outcome.