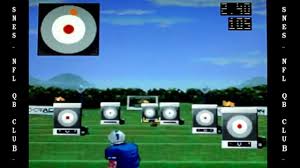 There was no live telecast, or, apparently, much publicity; the NFL Pro Bowl official event page did not list this event at all. In 2007, the tape delay broadcast moved from ESPN to NFL Network. The only reason explicitly cited for the discontinuation was that the field where the event was held no longer exists, as the hotel has taken the field back for other purposes.

Well now there is SOME publicity as I’m talking about it and according to Alexa.com, this is the 9 millionth largest website in the world (also, sadly, not a joke).

The reason this top 10-millionth largest site is talking about the skills competition is that two Vikings are participating in the events this year. Those Vikings are quarterback Kirk Cousins (who has a good chance to win as long as he is allowed to run through the crowd to the left), and Dalvin Cook (who has a chance to win if he’s able to run only to his right).

According to DailyNorseman.com, here are the events this year:

Thread the Needle presented by Panini: A new challenge that puts defensive backs to the test in a head-to-head competition. DBs will try to stop the opposing team’s quarterback from completing passes through the targets.

Gridiron Gauntlet presented by Castrol EDGE: Five players from each team will participate in a head-to-head relay race designed to showcase strength, speed, and agility. Competitions include a fumble scramble through an inflatable path, among others.

Best Hands presented by Intuit: Two WR-QB duos from each conference will compete in a timed relay race to catch a series of passes at a sequence of downfield targets as quickly as possible. Designated targets require a specific style of catch – diving, one-handed, over the shoulder, etc. – which must be executed before the receiver can move on to the next target.

Precision Passing presented by Skittles: Each conference’s two quarterbacks and one captain-appointed non-quarterback will battle it out in a one-minute accuracy competition, as they attempt to hit as many targets as possible.

Epic Pro Bowl Dodgeball presented by Old Spice: In the grand finale, Pro Bowlers will compete in a classic game of dodgeball, with every member of each team participating. In a best of three series, the team with the last person on the court wins.

Luckily, unlike some past events, you’ll be able to watch this on TV (and you don’t even need a Sega Genesis!). It’ll be on ESPN tomorrow/Thursday night, starting at 8pm Central time.

Should be a good time.