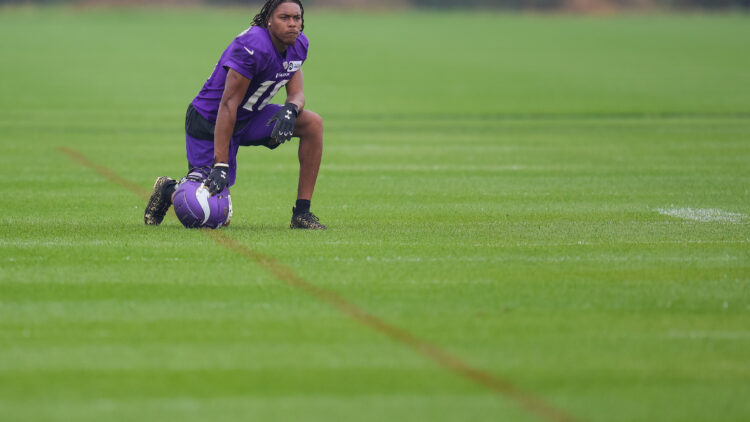 A few weeks ago, I wrote about the importance of the Minnesota Vikings prioritizing and establishing a winning culture with a new coach, if they choose to move on from Mike Zimmer. This goes further than wins and losses, it goes with leaving ego at the door and putting personal accolades aside for the greater good within the team. One of my main concerns is the path that second year superstar Justin Jefferson is on. Everyone on the team and within the league is well aware of Jefferson’s skill and ability. Justin Jefferson is easily a top 5 wide receiver in the league (more like top 3) and arguably the number 1 receiver in the NFL. Having drafted him with the 22nd pick in last year’s draft, the Vikings have him under a rookie contract for the next couple years.

Let me first state that I am a huge Jefferson fan. How could I not be? He’s explosive, exciting, and as charismatic as they come. Who doesn’t love the gritty? The kid has all the tools to be a generational receiver and he’s on my favorite team. I feel super lucky that he plays in Minnesota and hope that he forever remains a Viking, which is why my concern is rising for the culture that the Vikings are instilling in him.

When you have a rookie on the team, it’s like adopting a kid. They learn the do’s and dont’s in the NFL from their respective organizations, they adopt the culture, and they prioritize the things that the organization does. Ask yourself: how many Patriots draftees prioritize personal stats over winning? Not many. Belichick may be the grumpy old man, and the Patriots may play a boring style of football, but they win. They win constantly, and they don’t tolerate players that will not value team success over personal accolades.

Unfortunately, our beloved Vikings don’t have that culture. The fans don’t even have that culture; we complain about Kirk Cousins statistics in a WIN!! Think about that. We complain about Justin Jefferson not feasting on a depleted Chicago Bears secondary, despite the fact that the team controlled the game and, most importantly, won the game. Do we want highlights or do we want wins? It’s OK to point out the weaknesses that the team can work on, but within the fanbase it almost seems as though the highlights were more important than the victory.

The problem with this attitude and culture is that it is unavoidably going to affect the way the young players prioritize winning. It’s already happening. On Thursday, prior to Sunday’s game against the Rams, Jefferson is quoted saying “this is a statement game for me” on his matchup against elite cornerback Jalen Ramsey. Why? Who cares about what Justin Jefferson’s stats are, shouldn’t we be more concerned with winning the game? This is a team sport and if Jefferson has 2 catches for 12 yards but the Vikings win, they should be ecstatic. This would be a huge victory for a team trying to make the playoffs.

I believe in Justin Jefferson. I think he’s the ultimate wide receiver, and seems to be a wonderful teammate, but the organization needs to rethink how it is grooming the young guys, especially someone as special as Jefferson. There will always be ups and downs within an NFL season, and I want to feel confident that in the future, when the team hits a slump and Jefferson isn’t putting up crazy stats, he’ll be more frustrated with the losses than with the accolades.

We saw this play out as Vikings fans a couple seasons ago with Stefon Diggs, another wonderful talent that the Vikings drafted and groomed. His frustration with not getting the ball enough and a conservative offense made him want to move on to another team. We can’t let that happen again, and I fear that we are grooming Jefferson into the exact same mindset. You can’t blame Diggs or Jefferson; the Vikings drafted them so it was their responsibility to establish a culture that prioritizes winning over everything, even if that means sacrificing touchdown opportunities or catches to run the clock out and secure a victory. Winning is the ultimate accolade, the organization and we as fans need to also believe in that.