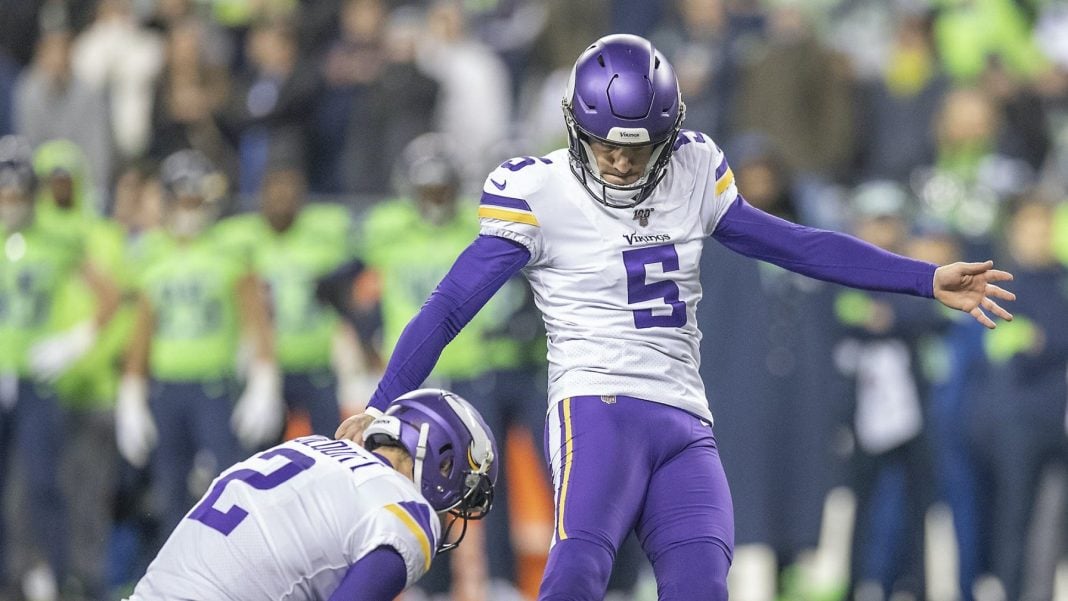 2019 was the beginning of a new era for the Vikings, as long time special teams coach Mike Prefier spurned the Vikings for a fresh start elsewhere. New special teams coordinator Marwan Maalouf came to town to oversee a unit that while considering great-to-elite on kick/punt coverages, was essentially in disarray in terms of actual punting or field goal kicking. Was he able to finally get some consistency out of the position(s)? I’d say so.

Kicker Dan Bailey was good on 30 out of 32 field goal attempts last season, including 3 for 3 in the postseason. He was 40 for 44 attempts in extra points, as well. 2020 will be his tenth season in the NFL and he’s as solid as the Laurentian Shield, the bedrock in northern Minnesota.

Before his first season in Minnesota, Bailey was the second-most accurate kicker in NFL history. He was selected to the Pro Bowl in 2015 with the Cowboys. He has a good leg and in his career he has kicked several from 56 yards. He is decent at directional kickoffs, as well. Bailey was named NFC Special Team Player of the Week three times last season. Baring some type of injury the Vikings needn’t worry about their kicking game, something they really haven’t been able to say outside of Blair Walsh’s rookie season and the completely underappreciated tenure of Kai Forbath.

The punting unit also saw gains in the quality department in Maalouf’s first year. Punter Britton Colquitt had 62 punts for a 45.2 average. His net average is very good at 42.7 yards, and he is a defensive weapon who placed 24 of his punts inside the 20-yard line (which is extremely important in general but especially under head coach Mike Zimmer who loves to play, and win, the field position game). He’s a very good veteran punter. One of the reasons kicker Dan Bailey is so accurate is because Colquitt is also his holder. He has steady hands and quickly places the ball where Bailey needs to have it. One of the reasons Bailey struggled in 2018 was that his holder, former Vikings punter Matt Wile, apparently “never learned to hold” for kicks according to Preifer at the time. This will be Colquitt’s eleventh season, his second with the Vikings.

Last year the Vikes thought so much of Long Snapper Austin Cutting they drafted him, a rarity for that position as he was the only long snapper drafted that year. He quickly proved to the Vikings that he was worth the draft pick by beating out seven-year Viking veteran Kevin McDermott. He is another reason for the success of both Bailey and Colquitt, as the field goal kicking unit comprised of those three players needs to essentially be as thick as thieves. Under Preifer there was a lot of change (outside of McDermott) and that usually spells disaster for the efficiency at the position, which is exactly what happened under Preifer (who replaced his field goal kicker nearly every season and a half).

Bailey said of Colquitt and Cutting, “They’re both pros on every level and make my job easy.”

Last season the punt and kick return game was bland and lifeless, as they missed one of the best punt returners in team history in Marcus Sherels for the majority of the season. Over on the kick return side of things the Vikigns have yet to find a consistent replacement for Cordarrelle Patterson, who may have never panned out as a wide receiver but was lethal returning kicks.

There were no returns for TDs for the third straight season. In 2019 the punt return game saw the Vikings use several players, at least until they picked Sherels up off of waivers before the playoffs. They used Chad Beebe until he was injured, again. They brought back long time ace punt returner Marcus Sherels for three games and then he was released in favor of the younger Mike Hughes. ‘Bisi Johnson also had one punt return. Ameer Abdullah returned 23 kicks for an average of 5 pathetic yards. His longest was 15 yards. His production was terrible and the Vikings should be looking for a replacement.

With that in mind, the Vikings drafted a couple of players with kick and punt return abilities this year. The best are receivers Justin Jefferson and K.J. Osborn, although with the gaping hole at receiver left by Stefon Diggs it’ll be surprising if first-round pick Jefferson is asked to handle those duties.

Either way, the Vikings need to improve in this area and they have some options. The Vikings special teams are solid, though, and if the return game improves they could be in the top ten.