It Turns Out Justin Jefferson is Good At This Football Thing 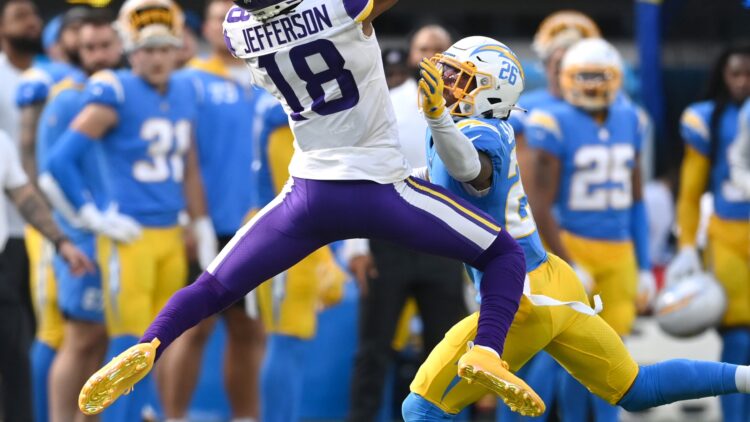 You could be forgiven if you were confused by how everyone’s favorite purple football team was choosing to use Justin Jefferson lately. Following the bye, Jefferson appeared to be an afterthought. 2 catches for 21 yards against the Cowboys; 3 catches for 69 yards against the Ravens. What gives? Is the sophomore slumping? Nay, quite the opposite is true; Jefferson is still a stud. The problem has rested in convincing Minnesota’s OC of this fact.

Sometimes, really smart people miss the simple things. We saw that with John DeFilippo back in 2018. We may be seeing it now with Klint Kubiak. A smart coach should make a concerted effort to magnify a team’s strengths. If you have a sensational wide receiver, do your best to throw to that wide receiver.

In other words, don’t overthink things.

Kirk Cousins happens to be a tremendous passer when it comes to the intermediate area of the field. Justin Jefferson happens to be a tremendous receiver when it comes to crossing routes in the short and intermediate areas of the field. It’s a perfect marriage (as Sam and I recently discussed on Notes from the North). The key, of course, simply rests in getting the ball over to #18.

Thankfully, the Week 10 match up with the Chargers demonstrated an increased commitment to Minnesota’s best player. 11 targets, 9 catches, 143 yards. Oh, and there was even a run. It happened to go for -4 yards, but the point remains that the offense finally decided to prioritize their most dynamic play maker.

Sometimes it feels like the coaching staff still thinks Dalvin Cook is the offense’s main weapon. He is still a weapon, but this season he has looked a touch slower. Jefferson, in contrast, has never looked better.

Keep in mind that not all stats are made equal. Getting a catch in a tight game means more than when the team is trailing by 40. The Chargers game was a close one and he delivered several important plays: “Seven of his nine receptions went for first downs, and he was the only Vikings receiver with an average depth of target beyond 10 yards.” He had 5 catches of more than 15 yards.

Look at the above video. It’s 3rd & 6 with 3 minutes left. The Vikings are again holding onto a late-game lead. Instead of a dump off to a TE or RB, Kirk throws the back shoulder throw to Jefferson. The Vikes were rewarded with a fresh set of downs.

Obviously, the Vikings still have a long way to go. Regardless of how things shakeout, it’s safe to say that Justin Jefferson needs to be the offense’s featured player.

Teams will inevitably devote their attention toward slowing him down. Let them. The passing game also features Adam Thielen and K.J. Osborn. If the OC does things right – a big “if” – then those two will feast when Jefferson gets doubled. The talent is there to put teams in no-win scenarios. Leave Jefferson in single coverage and get torched; double Jefferson and see Thielen doing his best griddy impression.

The pressure is on the coaching staff to make it work.

Also Read: Kellen Mond Is An Afterthought As Vikings Head Into Final Stretch of Season