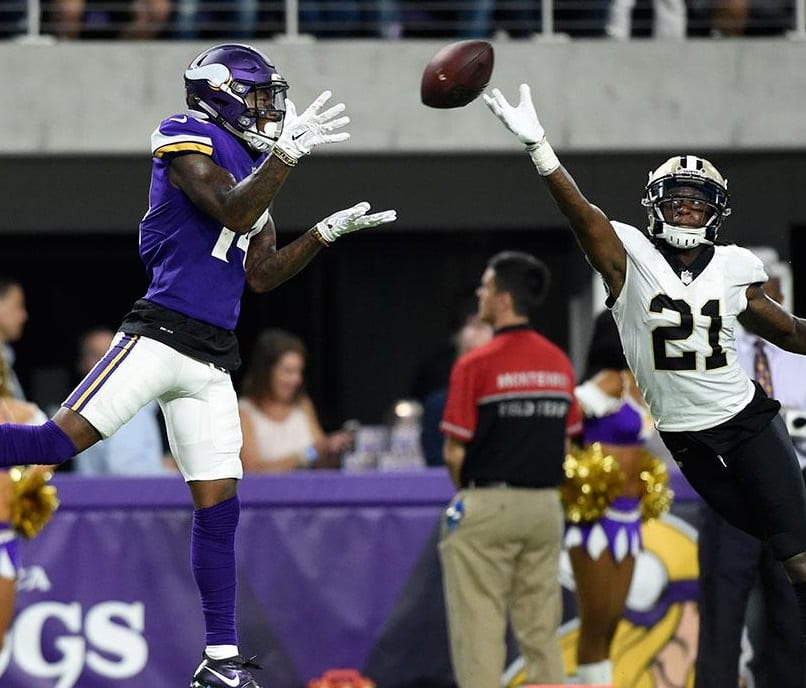 If there’s anything that can make the ho-hum start to free agency turn into an unmitigated disaster as far as the fans/writers of the Vikings are concerned it’d be trading a player like Stefon Diggs. Sure, the Vikings have tremendous need on their offensive line and very little cash to spend, but moving a main offensive piece like Diggs would… Well, let me just let fellow writer (and our new managing editor) for purplePTSD.com/VikingsTerritory.com Kirby O’Connor explain it:

If @stefondiggs is traded, I will personally duel Rick Spielman with flintlock pistols

That about sums things up. Although to be fair, Spielman would probably trade his pistol for another cornerback beforehand.

So, how and why did we get to this point? What is going on and is Diggs actually going (or about to be traded) to the Washington Redskins? What am I doing with my life? Let’s take a look.

It all started a few days ago with Diggs posting “cryptic” emojis to his social media accounts like this:

That, combined with the trade rumors circling the team (and the reality that they may need to trade a big piece to acquire an offensive guard), sent the Vikings fans into wait and cry mode. That mode turned into pitchfork and damn near riot mode. All of this was after Diggs’ brother, Trevon, who is a senior defensive back for Alabama, posted the following on Instagram (with the caption “Bring Him Home”) while tagging a few important Redskins online entities.

Stefon Diggs’ brother posted this to his Instagram today. pic.twitter.com/R6JSTAfj0A

While the Vikings have reportedly been taking calls for players like Trae Waynes and Xavier Rhodes, moving Diggs would be a disaster on nearly every level. From the effect it’d have on the team itself, to the morale of the team, to the PR angle with people following the team. The Vikings just extended Diggs last season to a massive deal. Trading him would potentially free up the cap space they need but it’d also limit what they’d receive in return, as not every team can take on Diggs’ yearly cap hit. Beyond that, the reason the Waynes/Rhodes trades wouldn’t be complete disasters is that the defense would be able to absorb those moves. The Vikings have spent multiple first and second round picks on other corners, and they’ve also had success in later rounds/with signing undrafted free agents like Holton Hill.

On the offensive side of the ball they haven’t been so lucky. While they have invested some high picks on receivers (Cordarrelle Patterson, Laquon Treadwell) they haven’t been as successful. They’re currently looking for a third receiver to play behind Diggs and his BFF Adam Thielen. Both complement one another and help each other make plays by forcing teams to pick their poison and decide which of the two to double cover. Removing Diggs from the passing game would be detrimental on a few levels; it’d leave the Vikings without any receivers to play opposite of Thielen and it’d also allow teams to focus all of their coverage on Thielen, which’d hurt his contributions as well.

So hopefully Diggs’ brother may have just been trolling or wishfully-thinking instead of jumping the gun on something we haven’t yet found out about. If you listened to last weeks ‘Morning Joes’ (with special guest host Kirby O’Connor) you’d may have heard how panicked I was about the state of the team and free agency. While trading Diggs might open up cap space and bring in an offensive guard, it’d definitely make me completely jump off the fence I’m currently sitting on and join the side of those that are just plain done with the idea that this Vikings team is still desperately holding their window of opportunity open. While I was a big proponent of Cousins coming to the Vikings (and thus could be “blamed” for the current cap situation), had the Vikings drafted some guards last year like I assumed they would, they wouldn’t be in the situation they are now where they’re going to have to most likely trade (or possibly cut/restructure) a player they spent a high pick on.

So because of Zimmer’s bias and greed when it comes to the defense and Spielman’s inability to say no to him, the Vikings are between a rock and a hard place. While they have shown an amazing ability to figure out contracts (and get players to agree to them), it appears that the magic has run out. So, by drafting Hughes in the first round instead of one of the many plug-and-play guards that were available late in the first round last year, they basically are at the point where they’re going to have to trade a core piece of the defense they’ve worked hard to develop for pennies on the dollar (since the NFL values draft picks over established players), as no team is going to want Mike Hughes, a guy with limited experience coming off of an ACL tear.

Perhaps last season they should have drafted someone like James Daniels of Iowa or Will Hernandez, or Austin Corbett or Braden Smith (who played tackle for the Colts but was a right guard in college), all of whom were selected after Hughes and before Brian O’Neill in the second round. Then you have the build up to free agency where the Vikings freed up some cash by releasing Mike Remmers and Andrew Sendejo, only to spend some of their limited cash on adding Shamar Stephen when they arguably didn’t need to (they can get by without Stephen a lot easier than they’ll get by with one guard). I only bring up those gripes to point out that I really wouldn’t be surprised by anything this team does at this point, as I was sure they’d invest in a guard in the first or second (or third, or fifth) and while they did draft Colby Gossett in the sixth round, he was cut and added to the practice squad before being sniped by the Cardinals.

While I wouldn’t be surprised if Diggs is traded, that doesn’t mean I wouldn’t be outraged either, and that feels exactly like the situation I’m familiar with when it comes to following this team. So, stay tuned to the sites (and our social media) for all your Vikings coverage and reaction. I’ll be hitting F5 on Twitter/Google News while sweating profusely until this thing blows over. At least I have this Tweet from Adam Schefter to keep me somewhat calm.

Despite Stefon Diggs trending on Twitter and his brother posting a picture of him in a Redskins’ uniform, he has not and is not being traded to Washington. “F—- no,” said one source.