How The Run Game Got Going 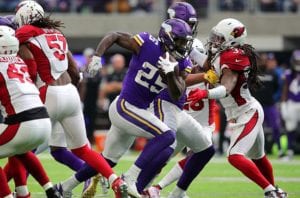 MINNEAPOLIS, MN – OCTOBER 14: Latavius Murray #25 of the Minnesota Vikings runs with the ball for a 21-yard touchdown in the first quarter of the game agains the Arizona Cardinals at U.S. Bank Stadium on October 14, 2018 in Minneapolis, Minnesota. (Photo by Adam Bettcher/Getty Images)

One thing stuck out in everyone’s mind as the Vikings sailed leisurely to a 27-17 victory over the Arizona Cardinals: the run game finally looks potent. This is after the Vikings put up abysmal production over the first five weeks of the season on the ground, even after accounting for volume and game script.

So what happened Sunday? How did the Vikings put up a good rushing performance, down their starting left tackle and star running back?

Here’s every successful running play from Sunday’s game. “Successful” is defined by how much was gained relative to down and distance. Get half of the yards you need on 1st and 2nd down, and of course any 3rd or 4th down conversions. There’s twelve such plays to break down.

Lmao Hill. Solid pickup behind Elflein and a nice job by Compton getting to the second level. pic.twitter.com/8VHIFNxch1

This is a pretty classic inside zone run with Murray rushing up the A-gap. A lot of good blocks happen, something that we didn’t see during the previous 5 weeks. Pat Elflein swallows the nose tackle, and Rashod Hill (unceremoniously) beats the 3-technique defensive tackle. Tom Compton and Mike Remmers do a great job of getting to the second level, giving Murray an easy 5 yard pickup.

Rashod Hill executes what’s called a “reach block” where you have to get all the way to the other side of the defender and push the other way. These are really difficult, and Hill does a nice job. Elfein destoys the nose tackle one on one again, and the second level blocks let Murray spring loose.

This one’s worth watching a few times, from how the motion helps the blocking math to the pulling linemen to Rudolph pic.twitter.com/nEf9fjPUIk

Roc Thomas motions outside, and Budda Baker leaves the box, removing a possible source of disruption. Chandler Jones is left unblocked, which will never matter because Diggs can easily outrun any edge rusher. Remmers and O’Neill pull with fantastic athleticism while Kyle Rudolph somehow takes out two defensive linemen. This play is a lot like a screen, but with a less risky setup.

Bethea got embarrassed, but Josh Bynes has some sins to answer for as well pic.twitter.com/wvseZ9e9C8

This run is meant to go between David Morgan and Rashod Hill, but Josh Bynes is able to position himself in that gap. Murray recognizes this, and shifts to the back of Morgan, leaving Bynes in a useless spot. Rudolph seals off the safety Tre Boston, and Murray caps off the touchdown by putting Antoine Bethea into the turf.

Bethea’s bad day continues. Treadwell motioning in to invite the CB then blocking someone else is cute pic.twitter.com/6xMUDrXKmZ

Here, Laquon Treadwell motions inside, inviting Patrick Peterson into the play. Treadwell blocks Budda Baker, allowing Peterson to freely tackle the runner – but as it is zone coverage, Peterson lines up too far outside the formation and can’t get to Murray before the run picks up a solid gain.

This is a crazy hard reach block for Remmers and he pulls it off beautifully pic.twitter.com/Jk3EPcxbg4

Here, Chandler Jones gets an angle on Rashod Hill, and it forces Mike Boone to cut back into the backside A gap. O’Neill gets away with a minor hold, but Pat Elflein swallowing Corey Peters (noticing a pattern?) and Remmers pulling of a reach block on a much more agile linebacker give Mike Boone a massive cutback lane.

David Morgan was ON. ONE. This week. TEs aren’t supposed to beat DEs. Also O’Neill’s range is on display. pic.twitter.com/2GOM1JJ9P5

This B-gap zone run is propelled by Remmers sealing off another difficult reach block while Brian O’Neill chips the defensive end, helping Morgan win his mismatch. O’Neill then does a great job of getting into space and locking down a much more agile corner, blowing him off the screen. Murray waltzes to a huge gain. Plays like this are why O’Neill was the highest graded run blocking lineman in the game by PFF.

Mayowa is the read and couldn’t have made it easier. Rudolph eats his man (RIP Bethea again) and Cousins could have started dead-arm dancing at the 5 pic.twitter.com/D4t4P3cCPQ

Here’s a classic read option – the old Colin Kaepernick play that’s now a building block in flavor-of-the-month RPOs. The idea is to read what the DE, Benson Mayowa, does. If he hesitates, give it to the running back before he can react. If he crashes toward the running back, you keep it and run around him. The second thing happens, Rudolph carries Bethea into oblivion, and Cousins moonwalks in for a score.

This is a really nice read from Murray. O’Neill does a wonderful job keeping his back to the runner pic.twitter.com/U6YzUUakMY

Murray’s best run of the day starts with Corey Peters finally getting penetration past Elflein. Murray cuts to the back side of the play, where Robert Gunter is also getting position on O’Neill. Murray cuts again to come in behind O’Neill, turning a flawed block into a perfect one. Murray positions himself perfectly to break through the second level tacklers and fall forward for a sizeable gain.

On 3rd & 1, Mike Remmers fails to get a push on Robert Nkemdiche while Corey Peters slides over to the play side A-gap – exactly where Cousins wants to go on a QB sneak. Meanwhile, Josh Bynes reads this, and flows that way to help stuff Cousins. Cousins thinks on his feet and cuts back to the other A-gap, causing Bynes to lose track of him. Bynes dives into nowhere, and Cousins easily converts. Game over.

Love Morgan’s block on Bynes. Also Rudolph gets beat by Mayowa but Murray does a nice job to angle himself around and make Rudolph’s block good enough pic.twitter.com/oyuGGiWGvl

Arizona’s defense does a nice job of plugging the gaps, especially Mayowa who penetrates past Rudolph. But Murray makes an excellent cut and makes Mayowa miss, allowing him to get into the second level with a head of steam.

Final real play of the game – Compton seals off a pretty nice day by putting a man’s face in the turf pic.twitter.com/pYkyU7amAq

In an obvious run situation, Arizona lines eight defenders up at point blank range to Minnesota’s seven blockers – a problem. So the Vikings slide protection left, and have Murray simply outrun the man at the end (Bethea). Hill blows Chandler Jones past one side of the key gap while Tom Compton wins against a tenacious rush by Nkemdiche. After Murray has burst through, Compton finishes Nkemdiche with the kind of heart that would make any OL coach swoon.

The day was won not by some fancy secret, or a sudden revelation. Simple concepts were executed, Murray ran like a veteran, and otherwise maligned linemen pulled off some difficult blocks on uninspiring defenders.