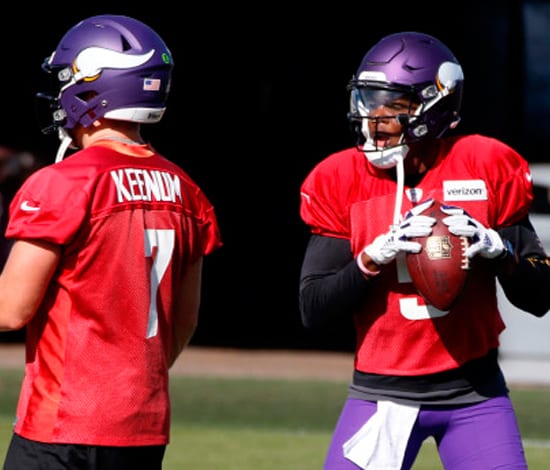 I’ve always been endeared to the application of economics in sports. I’m not alone – Bill Belichick was an economics major and constantly applies those concepts to his decisions. And honestly, shouldn’t we all try to turn our team into the Patriots? Economic concepts like market tendencies, probability analysis and so on can help us parse this incredibly complex and high-variance sport.

The Vikings are in a pretty pickle with their quarterback room. Case Keenum has rattled off 5 straight wins as QB of the Vikings. He’s coming off of a four touchdown performance on the road that created a lead so comfortable, two hideous interceptions were rendered irrelevant. His actual play can and should be criticized, but the team is white hot with him under center. On the other hand, Teddy’s most recent body of work leaves much to be desired statistically, but there’s an intangible value he can offer to the team. It may not be a guarantee that Teddy offers better QB play, or is ever the same QB he was pre-injury, but it’s undeniably possible. And that possibility must be considered.

So we’re stuck. With the myriad of possibilities, it’s difficult to choose an option. This is where economics comes in.

The only scenario where it doesn’t make sense to start Teddy is the one where you’re beyond-a-doubt certain he’s worse than Case Keenum.

Game theory is commonly applied in situations where two parties have two options each, but you don’t know which option one will take. A common example of this is the prisoner’s dilemma.

Take two prisoners, Bud and Jerry, who have been charged with a heinous crime. The prosecutors lock the two in separate rooms, cut off communication and offer them a deal. Each is given the opportunity to betray the other by testifying against him, or stay silent and cooperate with each other. The sentences are then changed as follows:

-If they both betray each other, they each serve 10 years in prison.
-If they both remain silent, the prosecutors can only get them for 2 years each.
-But if, say, Bud betrays Jerry, and Jerry stays silent, Jerry gets a lifetime sentence, Bud goes free, and Jerry gets life without parole. And vice versa.

So there’s a risk- if you stay silent, you could get hosed, but if you both trust each other, it ends up being the best possible outcome between the two of you. Your first instinct may be to evaluate your risk of your partner betraying you. But it’s much more concrete than that.

From Bud’s perspective, it doesn’t matter what Jerry does. Betraying him is better. If Jerry betrays Bud, they both get 10 years, but if he stayed quiet, he’d have gotten life. If Jerry stays quiet, he could go free, rather than getting 2 years for staying quiet himself. The same applies to Jerry. Economically, this is a lesson in behavior for individuals who look out for themselves rather than do what’s best for the group. But it’s also a way to illustrate that the nebulous concept of “trust” between Bud and Jerry is irrelevant. There’s one option that’s clearly better no matter what the other variable is.

Let’s apply this to Case and Teddy. Similarly, there’s two points of variance. The first is the decision itself. You either start Case or start Teddy. The second is Teddy Bridgewater himself. While the coaches have practiced and worked with him for months now, there’s still an air of mystery surrounding what Teddy will do on the field in a live game situation. We can assume the coaches understand how good Case Keenum is, and the limits his high-variance play provide, but aren’t sure how good Teddy is.

If it’s clear that Teddy can’t protect himself or isn’t healthy, the Vikings will yank him just like they yanked Bradford in week 5, when Keenum proved he can handle the whiplash. It shouldn’t take much time to figure out if Teddy is worse than Keenum, since the factors contributing to that are quite visible. The risk of bad Teddy play is highly mitigated by the coaches’ ability to simply switch back. The possible reward for Good Teddy is a deep playoff run with a truly special team.

Further, the added stability could prove a boon for the Vikings moving forward. Resolve the controversy now, rather than letting it linger and dominate the locker room. Having learned that Teddy is Bad Teddy is better than continuing in the dark. The only scenario where it doesn’t make sense to start Teddy is the one where you’re beyond-a-doubt certain he’s worse than Case Keenum. And let’s be honest with ourselves, that scenario doesn’t exist.

The foil to all of this is an honest-to-goodness QB competition. If, during this week of practice, the Vikings split 1st team reps between the two quarterbacks, they’ll simply start whoever looks better. That removes the uncertainty and renders this exercise moot. But if you believe there is uncertainty in the QB room that can’t be resolved on the practice field, basic logic dictates that you pursue the advantage.