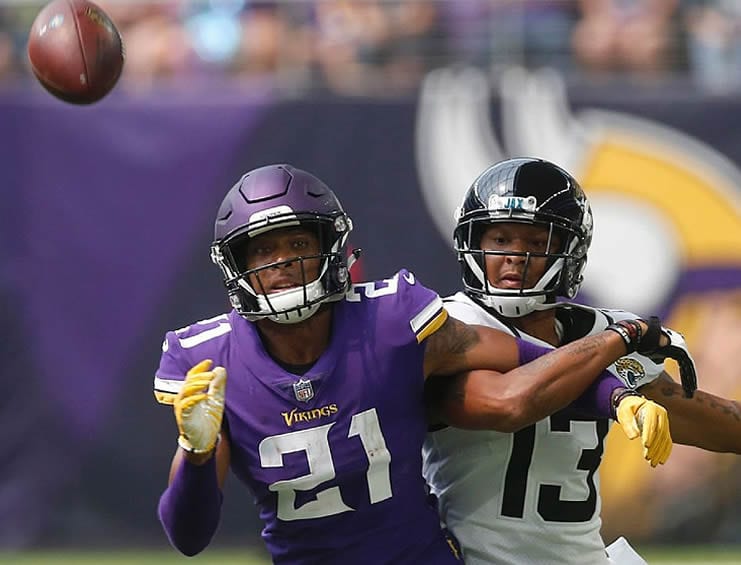 Note from the Editor: We’re extremely honored to be working with Vikings61.com (The ‘V61’) this season!  The V61 is a new Vikings news/content site with some of the best writers in the Vikings media landscape! Follow The V61 on TWITTER here!

Almost one complete year after his ACL surgery, Vikings’ cornerback Mike Hughes has been cleared to play against Oakland on Sunday.

After Adrian Peterson disproved the formula for ACL tears and returns in 2012 (rushing for 2,097 yards), athletes in the NFL have sometimes pushed themselves back too quickly after such an injury and seen their play fall beneath their expectations.

Vikings’ running back Dalvin Cook may have been one of those players. After his 2017 ACL surgery, Cook attempted to return at the beginning of the 2018 season and found himself hindered by other infirmities, shortening a season that ended with only 615 rushing yards.

Minnesota cornerback Mike Hughes, playing a position just as demanding on a knee and it’s crucial ligaments, is now facing a similar scenario. A full season displaced from his own October ACL tear in 2018, Hughes was finally cleared this week for full Vikings’ practice, and, according to NFL insider Adam Schefter, will make his 2018 game debut at US Bank Stadium against the Oakland Raiders.

Hughes now augments a Vikings’ pass defense that doesn’t need a lot of help (but certainly will take it), ranking third in the NFL in passing yards against, and first in opponent touchdowns after two games.

However, with starting slot corner Mackensie Alexander still sidelined with a tough elbow injury, Hughes has the opportunity to get his feet wet again in a sundry of Mike Zimmer’s defensive play designs that feature five defensive backs or more.

Without Alexander, Zimmer has been using safety Jayron Kearse in his schemes, while mixing in rookies corners Nate Meadows and Kris Boyd. Despite a barrage of points in a rough first quarter last week in Green Bay where the entire Minnesota defense was tilted to one side, the formula has been working.

As the Viking pass rush has been superlative (both Everson Griffen and Danielle Hunter lead the league in quarterback pressures with 15 each), Zimmer has not seen a hole form in his coverages without his starting slot corner, but having Hughes back may allow him to dive deeper into his playbook for ideas against Raiders’ quarterback Derek Carr and his offense on Sunday.

Hughes has reported that he will wear a brace on his injured knee when returning to game action. Will such a thing attract some attention to his place on the field and some point of the Raiders’ offense?

Probably. But it will be his play that will prove the consistency of that point–in this game and the others that follow.

With Alexander returning before too long, Mike Zimmer may indeed find himself with either too talented–yet somewhat limited–corners, or a defensive backfield that can challenge any passing offense in the NFL.

The first view into these potential circumstances starts today, when Hughes mans his spot. One thing is for certain, Hughes will be buoyed by the enthusiastic roar of thousands of home Vikings’ fans welcoming him back.