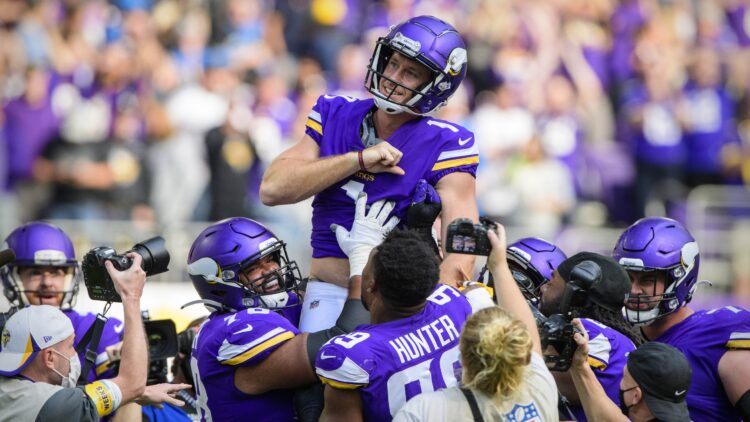 Well that was stressful, huh? In a game that really couldn’t have gone much worse for the Vikings offense, it was kicker, Greg Joseph, that ultimately saved the day. Neither team truly felt like they actually wanted to take over this game, and it turned into a low scoring affair by two stumbling offenses.

After trading field goals to begin the game, Jared Goff found himself under pressure in his Vikings territory and coughed up the ball following one of two Everson Griffen sacks on the day. Danielle Hunter scooped up the loose ball, and the Vikings worked their way down the field for their second of four field goals on the day. Ultimately, this sequence may have been the deciding factor in the game.

Minnesota’s defense held strong again on the next possession, forcing a punt. They then marched 73 yards down the field for their sole touchdown of the day, capped off by the 15-yard catch and run by Alexander Mattison. Mattison finished the day with 153 yards from scrimmage; one of the few bright spots on the Vikings offense.

The Vikings took a 13-6 lead into halftime, but in the second half, they punted or turned the ball over on their first four possessions before a 55-yard field goal by Joseph put them up 16-6 with 4:33 left in teeth fourth quarter.

After this point, all mayhem broke loose. Detroit turned the ball over on downs during their ensuing possession, only for Joseph to follow up his 55-yard make with a missed 49-yarder that landed well short of the goalposts. The Lions took advantage of this lapse from Joseph, and they cut the score to 16-9 following a 40-yard make from Austin Seibert.

At this point, the Vikings really just needed to get a first down to end the game, but on a third down run, Alexander Mattison fumbled the ball away on Minnesota’s 20-yard line. It was scooped up by Jalen Reeves-Maybin, giving the Lions one last hope. Almost immediately, Detroit found the end zone on a seven-yard run by De’Andre Swift, cutting the lead to 16-15. Swift finished the day with 17 touches and 104 yards.

Following the touchdown, Dan Campbell chose to go for the gusto and attempt a two-point conversion. Right on cue, a Vikings defense that played solidly all day seemed to fold, allowing Jared Goff to find Khadijah the back of the end zone. Detroit held a 17-16 lead with 37 seconds to go.

After an extremely quiet day from Adam Thielen, he chose the perfect time to get his only two catches of the day. He picked up 21-yard and 19-yard receptions to help get the Vikings back into field goal range. On a day in which kickers all around the NFL seemed to struggle, Joseph found himself with a chance to win the game with one more make. He nailed the 54-yarder, and the Vikings somehow managed to walk backwards into a win, 19-17.