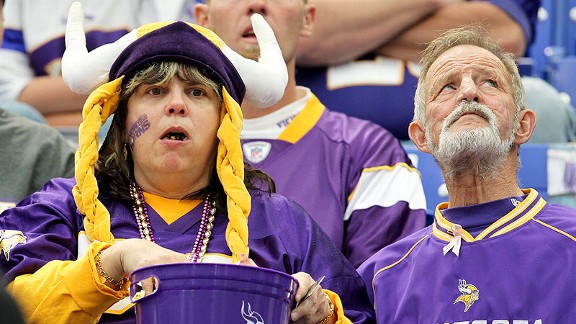 The Vikings dropped their season opener against the Green Bay Packers under unprecedented, Covid-induced conditions by a score of 43-34. While the Vikings showed promise early, scoring on their first drive and keeping the Packers out of the end zone until late in the first half, the Packers were able to dominate the rest of the game.

There were several factors that allowed Green Bay to take control.

First of all, the Vikings committed a series of self-inflicted wounds, beginning with penalties. Aaron Rodgers has long been recognized as one of the most effective quarterbacks in the league when it comes to drawing the defense offsides with the hard count. He also capitalizes on these opportunities with disconcerting regularity. Since 2010, Rodgers has thrown for 1,000 more yards than any other quarterback in the league on free play opportunities. On Sunday, Rodgers drew the Vikings offsides on third down on three separate occasions which resulted in three first down conversions, including a long gain down the sideline to Marquez Valdes-Scantling.

The Vikings also committed a critical error right before the half. With the ball on their own 25-yard line and only 39 seconds left on the clock, offensive coordinator Gary Kubiak chose to be aggressive, electing to go for the score instead of taking a 15-7 score into the locker room. Kirk Cousins threw an interception on the second play of the drive on a poorly-placed ball intended for Adam Thielen. The turnover presented Aaron Rodgers with the opportunity to throw a 45-yard touchdown pass over rookie cornerback Cameron Dantzler. Although the Vikings came back with a field goal before the half, set up by a long Mattison Alexander run, the decision to go for the score cost the them four points in a game, which, up until that point, had been closely contested.

Another mistake occurred on the safety the Packers scored in the second quarter. Backed up on their own goal line, Gary Kubiak called for a play action pass that had Kirk Cousins taking a deep drop back into the end zone. The Packers happened to have the perfect play dialed up for this particular play call. Cornerback Jaire Alexander came on a blitz off of the edge, wrapping Cousins up in the end zone just as he reached the top of his drop. It was bad fortune that the defensive call put their player in a perfect position to make the play, but it was also a risky play call, and the Vikings paid the price.

Although the Vikings made a plethora of errors in the game, both in the booth and on the field, Packers quarterback Aaron Rodgers and head coach LaFleur deserve credit for a surgical dismantling of the Vikings’ young and inexperienced defense.

The Vikings fielded six new starters on the defensive side of the ball this season, including a cornerback group with no players over the age of 24. It appeared that coach Mike Zimmer attempted to protect his young cornerbacks in the game plan, bringing pressure on passing downs to reduce the amount of time they would have to cover the receivers.

The Packers, however, had the perfect counter in the form of a mass of out-breaking routes. These quick-hitting pass plays allowed Rodgers to get the ball out of his hands quickly and in rhythm, unperturbed by the blitzing pass rushers. The game plan also took advantage of the uncertainty of the inexperienced cornerbacks, most likely more concerned with giving up a deep touchdown pass than jumping the out-breaking routes. Rodgers delivered, of course, and so did receiver Davante Adams. Adams was able to rack up 14 receptions, 156 yards, and 2 touchdowns on the Viking cornerbacks, a majority of the yards coming on out routes.

The performance of the Packers’ offense, along with the Viking mistakes, allowed them to stay on the field for 41:16 of time of possession, a staggering 68% of the entire game.

The Vikings also missed all-pro pass rusher, Danielle Hunter. They were unable to get after Rodgers all day, recording zero sacks and pressuring on just 7 of 44 dropbacks, as Rodgers was able to pick them apart with general ease. New free agent addition Yannick Ngakoue was a nonfactor in his first career game as a Viking in the 44 snaps that he played.

Despite the disappointing performance in week one, the Vikings will have a chance to bounce back next week as they travel to Indianapolis to take on the 0-1 Colts.