There’s a classic saying with fantasy football – the draft is won in the later rounds – and that sentiment is true. While the top players provide a base for season’s fantasy point output, championships are won via players taken late in the draft that outperform their draft slot and through waiver wire pickups. Nobody gets all of their picks right in the draft, but instead it’s about maximizing potential with those late round grabs. So what players show promise of being keys to winning a fantasy football championship this year? There are five players that I believe will significantly outperform their draft slot and are must grab players in the later rounds this year. But before we dig into the players, I want to establish the criteria I set to consider a player a “sleeper”. The first part is that the player should be commonly available in the back half of a standard 12 team league – meaning the ninth round or later (players that you love more than most in the earlier rounds are just targets with upside, and not necessarily sleepers). The second data point they must meet is that they present at least a two round value for where they’re being taken (in other words, if you take the player in the twelfth round, he was considered valuable in the tenth round or earlier). Again, the reason for this is that a one round value this late in the draft isn’t necessarily valuing a player exceptionally above where he’s already being slotted – and this is a key component of finding a sleeper (a sleeper is not someone you value in the top of the twelfth when he is going in the bottom of the twelfth for example). Finally, that player needs to be within the realm of usability in a 12 or even 10 team league. You may value a player substantially more than most, but it doesn’t matter if you wouldn’t draft and roster that player (now, by the definition of a sleeper, this should always just happen to be the case even if this parameter we’re set, but I just wanted to establish that point going into this article as all of these players can be usable and valuable in 10 and 12 team leagues). So with that criteria in mind, here are five players that I think are priority targets as sleepers in the back half of your draft. 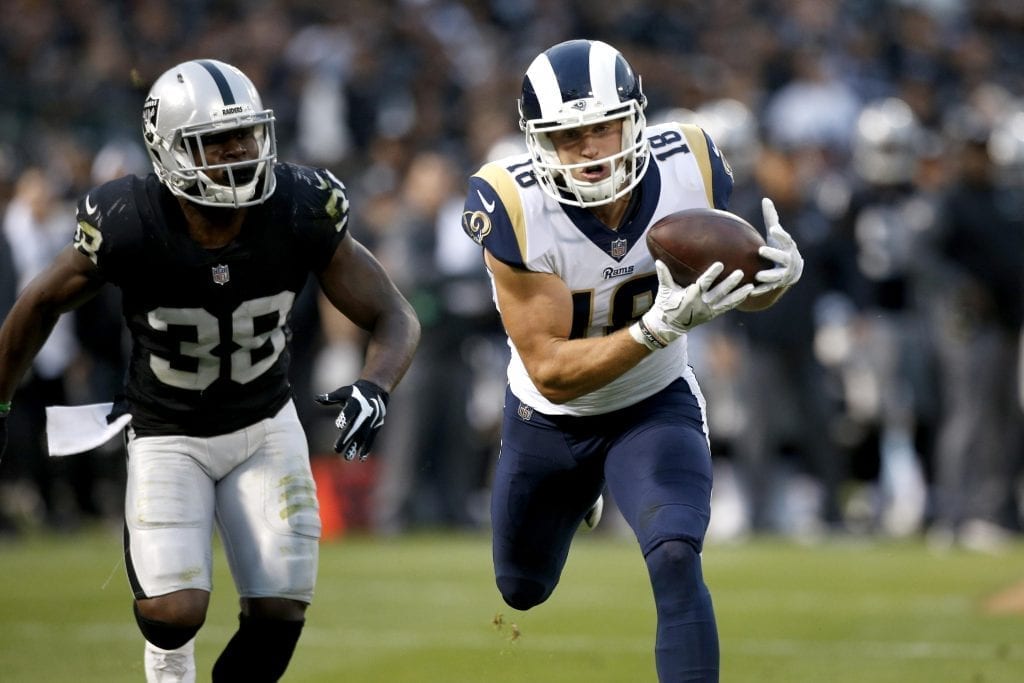 Kupp is a player that began his breakout last season bursting for 62 catches, 869 yards, and 5 touchdowns with the Rams in his rookie year. This put him at an average touchdown rate (just a hair over 8%) for receivers, so it’s not like there’s clear regression concern with Kupp’s touchdown ability. The Rams did add Brandin Cooks in the offseason but also got rid of the failed Sammy Watkins experiment. Kupp showed an ability to be productive in the Rams’ offense (as he was competing with Sammy Watkins and Robert Woods for targets last year) and is in rare territory as a fantasy receiver.

Pulling data for game-by-game finishes for players over the last two years, Kupp has finished as a WR16 or better forty percent of the time – bested only by receivers Antonio Brown, Odell Beckham Jr., DeAndre Hopkins, Mike Evans, Julio Jones, Tyreek Hill, T.Y. Hilton, and Davante Adams. That’s some pretty astounding territory for a guy being taken in the ninth round, while the rest of these receivers are being taken within the first three rounds. He’s had a higher percentage of WR8 or better finishes than players like Stefon Diggs, Amari Cooper, Golden Tate, Jarvis Landry, Sammy Watkins, and Emmanuel Sanders. This shows he not only has shown upside as a top receiver but also has shown consistency to be played on a weekly basis and not just having season statistics buoyed by a few good weeks (like Adam Thielen’s 2016 season).

All of this leads me to believe that not only is Kupp going to continue to get a healthy share of the Rams’ targets (I’m projecting him for just over 100 targets on the year), but he’s going to make the most out of the targets he is seeing and should continue to produce at a quality starting WR level for your fantasy team. He provides some consistent value later in the draft that is being missed on by quite a few fantasy owners this year due to the Cooks’ signing (which I believe is being overcompensated for as Cooks has produced fewer starting-ability weeks than Kupp has in the last two years. This isn’t to say Cooks won’t be the primary target, because I believe he will, but not nearly to the extent that some seem to be assuming). 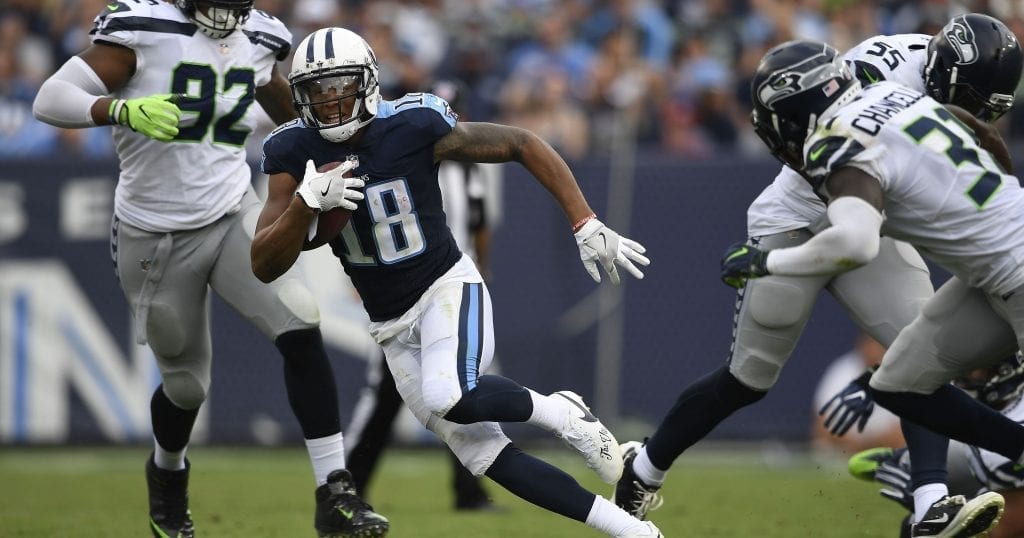 No, Matthews is not a ‘sexy’ pick to be a sleeper in this year’s draft, but yet somehow he falls into the twelfth round yet again this year. He’s not a player that’s going to have a huge upside, but he provides some serious value and underrated production this late in the draft. Matthews put up 800 yards and 4 touchdowns last year and is a year removed from his nearly 1,000 yard, 9 touchdown season in 2016.

Nobody of note was added to the receiving corps for Tennessee, and there looks to be some positive regression in the passing game after one of the worst touchdown rates in NFL history – seemingly an outlier on QB Marcus Mariota’s stat sheet. Mariota had touchdown rates hovering around 5% throughout his career, but last year that number dropped to 2.8%. That number was likely a result of poor situations and bad luck throughout the year and if that number gets back to his career average, you’ll see a significant boost for the entire Titans receiving corps. If Mariota would have been just league average last year in touchdown rate, we would have seen his touchdowns go up from 13 to 21 – likely an additional 2 or 3 touchdowns for Matthews (for 6 or 7 on the year). Say he would have caught 3 of those 8 extra touchdowns Mariota hypothetically threw – he would have finished at the WR24 (or a WR2 tier) instead of where he ended up at WR37 (or low end WR3/high end WR4). That’s a solid value for someone being taken as the WR56 in drafts.

Matthews has remained consistent throughout his time in Tennessee, posting a score that finishes as WR16 or better in 22% of his games and as WR32 or better in 42% of his games. He provides a solid dependable floor that’s hard to find in the late rounds of the draft and has proven to be a favorite target of Mariota’s over time. All of this seems to bode well for Matthews in 2018, who should bounce back into that 90 target, 800 yard, and 5 touchdown range for the year. 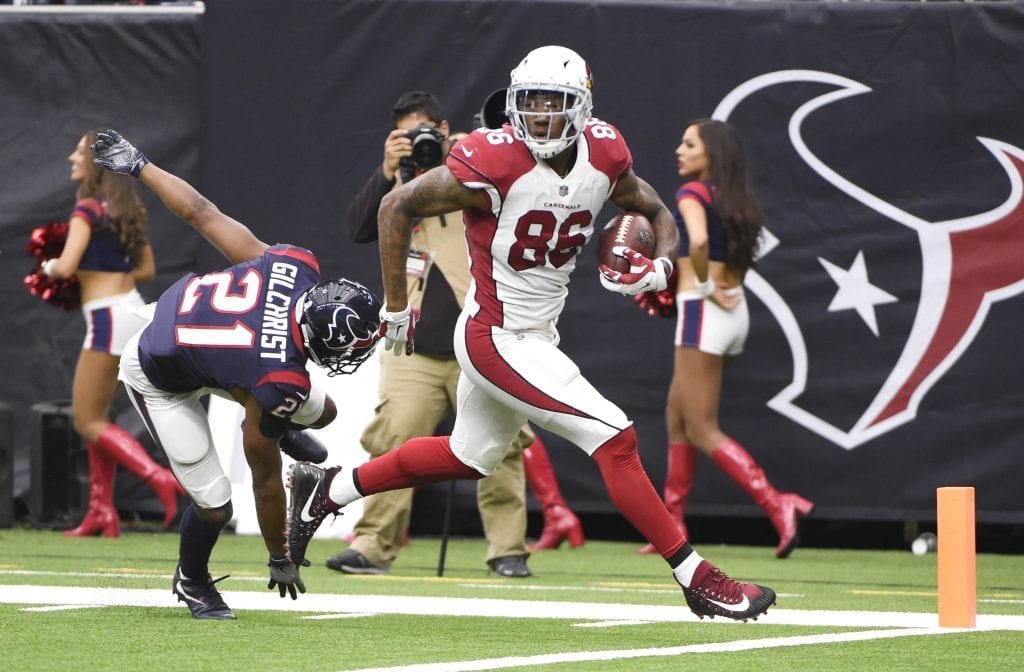 Ricky Seals-Jones is currently going undrafted in 12 team leagues, but is looking to make a massive leap forward this year at tight end in Arizona. There’s been a lot of buzz about Seals-Jones coming out of camp and his ability to make an impact in that offense. He will be fighting for receptions with David Johnson and Larry Fitzgerald (as well as a smattering of mid-tier receivers), but with Sam Bradford as the starting QB and his love for using tight ends, I think Seals-Jones could get a lot of work this season (and if Rosen takes over, it wouldn’t surprise me to see him use Seals-Jones as a security blanket as a rookie QB).

While it would be naive to think that he can get the target share like a player like Kelce, Gronkowski, or even Engram, it wouldn’t surprise me to see Seals-Jones receive anywhere in the 60 to 80 targets range. His consistency and upside within the limited role he’s previously had in the offense bodes well for production when his role expands, and given that the Cardinals are likely to be bad this year, the opportunities could be elevated compared to recent years. 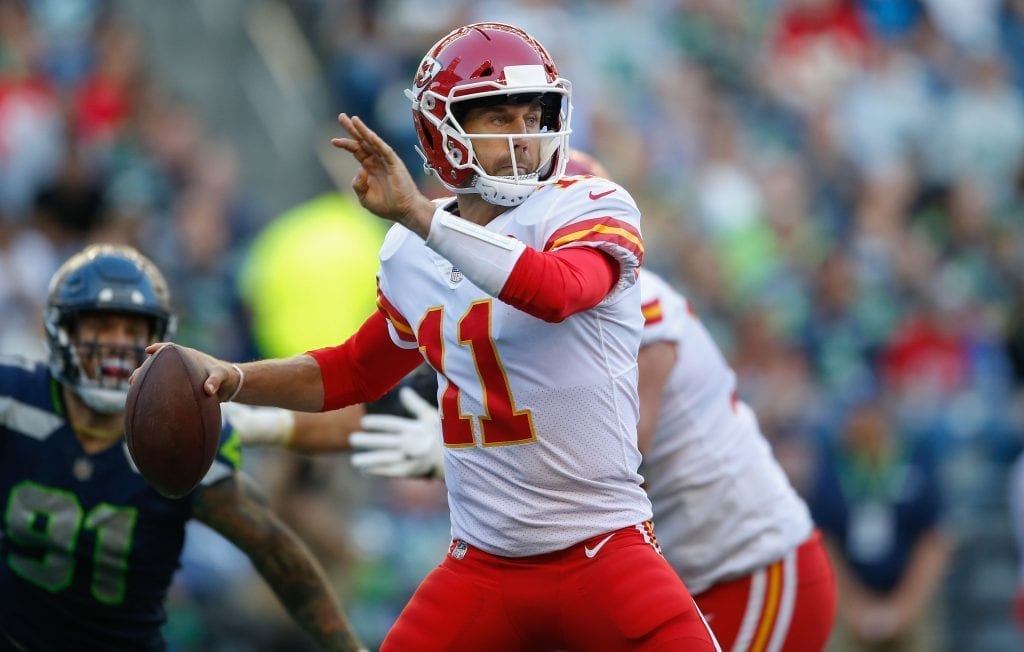 Smith is currently going in the QB15-QB20 range in most drafts. While I don’t recommend taking him early despite where we have him ranked (why draft a player early than necessary, right?), he’s a player that provides value in the later rounds if you choose to subscribe to the late round QB method (which you can read more about here in an article by NumberFire editor JJ Zachariason). He’s got good upside (he has a higher percentage of QB4 or higher finishes over the last two years than players like Cam Newton, Matthew Stafford, and Matt Ryan) and also shows a significant floor.

Smith was traded this offseason from the Kansas City Chiefs to the Washington Redskins. While this has to be a disappointment for him in terms of offensive weapons he has to utilize, the Redskins did upgrade at running back in the draft with Derrius Guice and also added WR Paul Richardson during free agency while still having Jamison Crowder, Jordan Reed, and Josh Doctson who provide two key targets (when they’re healthy). Another benefit for Smith is that while Kansas City was playing ahead for much of the 2017 season, the Redskins will likely be playing from behind, which could lead to some extra throwing opportunities – similar to how (now Vikings) QB Kirk Cousins benefited from the extra throws.

I think it would be unrealistic to expect Smith to repeat his career year last year, but even with his projected regression to his career numbers, Smith still looks to finish in the QB8-QB12 range instead of the QB15-QB20 range like he’s being drafted. Look to grab Smith if he’s still there in the 10th, 11th, or 12th rounds to get yourself some solid starting value at the quarterback position. 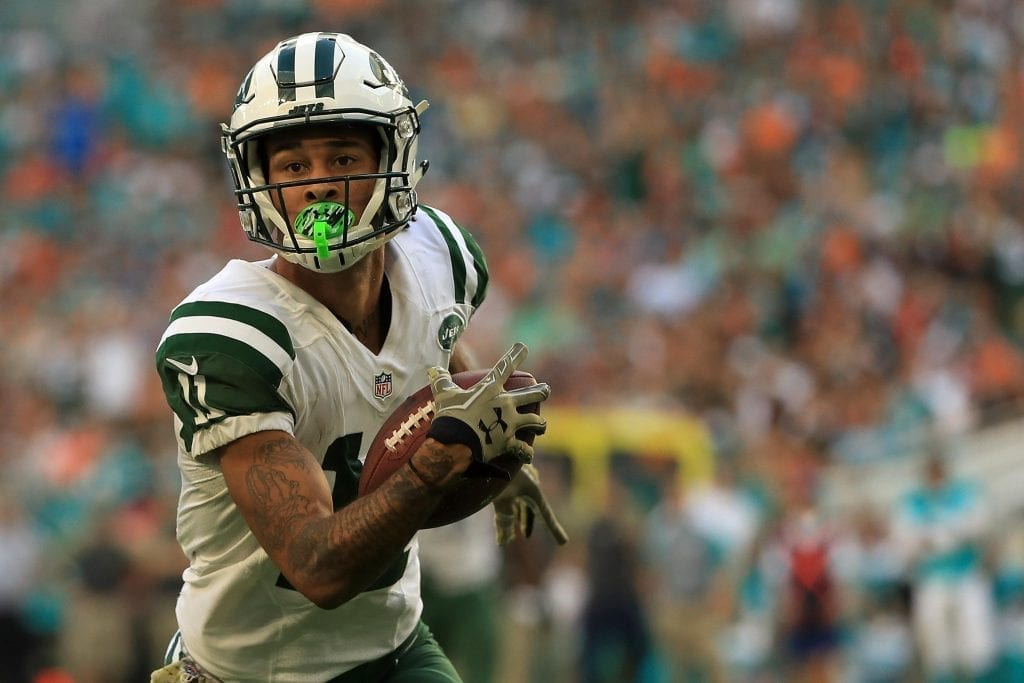 Anderson was a player that was crucial for owners to take late in rounds or pick up on the waiver wire – he ended up with nearly 1,000 yards and 7 touchdowns last year as the only decent receiving option for the Jets with Enunwa on the IR. While Enunwa returns this year and they added Terrelle Pryor in the offseason, Anderson still looks to be on pace for 100 or so targets on a Jets offense that looks to be playing catch-up a lot during the season – although his touchdowns will likely regress.

Anderson has produced similarly to Kupp – thirty percent of games he’s played in have resulted in a WR16 rank or better and fourteen percent have resulted in a WR8 or better. Where he differs from Kupp is his floor: Anderson seems to be more consistent as he has finished as a WR32 or better forty-six percent of the time (providing at least some flex value in 12 team leagues). While players like Marquise Goodwin and Jamison Crowder are going just before Anderson, Anderson has proven throughout the last two years that he can have both a higher ceiling and a higher floor than players like Goodwin and Crowder. Anderson will likely assume the WR2 status for the Jets which will provide him the necessary base for production and if he can put up similar touchdown statistics that he did a year ago, Anderson could be a steal in the ninth round.

Those are five of the sleepers that I’m looking at targeting this year later in the draft, but I’d love it if you let me know in the comments who you are planning to target this year! 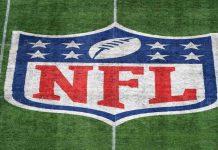 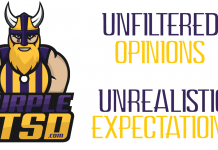 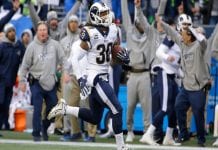