As the summer progresses we near Minnesota Vikings Training camp which is once again taking place at the Mavericks facility in Mankato Minnesota, every year beat-writers from far and apart to cover the entire spectacle and at the end crown a worthy player, usually a rookie or young player, as the years Mr. Mankato aka the Training Camp MVP. It’s still much to early to start speculating on a Mr. Mankato for 2017, however, as OTA’s are quickly ending it may be appropriate to take a look at first impressions for some of the key Vikings rookies.

There’s various rookies to watch this year of course with the the most exciting and discussed being the new Vikings glory boy second round pick Dalvin Cook. Cook has through OTA’s and rookie minicamp drawn praise from numerous Vikings staff as well as beat-writers on his quickness and vision.

Kyle Rudolph on Dalvin Cook “Really fun to watch..A special runner and he's a guy who has great vision & always seems to make the right cut"

Cook is likely to keep impressing through the remainder of OTA’s and into training camp as his highly coveted skill set seems to be a great fit early with the still less than desirable Vikings offensive live.

Pat Elflein was the second rookie the Vikings drafted and the third round pick has a tall task in front of him trying to lift the quality of one of the worst offensive lines in football. Early impressions from beat writers and staff on the quality of Elflein has been limited but it seems that Elflein is coming along as expected.

On offense, Nick Easton and Pat Elflein split snaps at center. The other first-team linemen were Reiff, Boone, Berger and Remmers. #Vikings

With the two big rookie signings out of the way it’s time to look at some of the later picks who’ve been impressing early. Rodney Adams, Bucky Hodges and Stacy Coley have all turned heads early on at OTA’s.

Especially Rodney Adams seems to be transitioning well to the next level, at least if you’re to believe Vikings announce Paul Allen who hinted that Adams reminded him of Diggs early on in his career.

"Rodney Adams absolutely stood out to me at rookie camp. He caught everything. He was drafted in the same round as Diggs."

OTA’s will conclude on June the 8th. 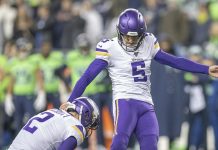 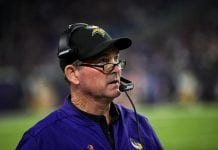 So, you think the Vikings Defense stinks now?

So, given its true that Adams, Coley AND Treadwell do enough to make the 53, what does the WR room look like? Those three plus Diggs, Thielen and Floyd? What of JWright? The supremely athletic MoBo?

Hey Todd! I’m digging your comments, man, we talked about this on the podcast last week. My guess is they keep six. Diggs, Thielen, Floyd, Treadwell, Adams and MoBo.

I’d say, pretty good guess (Coley vs MoBo). Thank you for the kind words, just trying to get conversations started. I learn a lot from fans, especially local ones. Those guys can be a wealth of Viking knowledge.

That’s awesome, man! Do you follow us on Facebook? I’d love to chat more, there (Have you ever thought/done any writing about the team?)!

I have not, nor was I aware of your FB involvement. I’ll check you guys out. With respect to writing, I’m hyper opinionated with respect to the purple, but lack the necessary writing skills to do much with it. Love your site! Definitely appreciate the varied opinions of those NOT on the organization’s payroll. So, thanks for that! Look forward to your future articles, particularly once we get to preseason.

Thanks again for the support, man! We’re attempting to live our dream(s) and it’s always just awe inspiring to see people on our site! While I disagree about your writing ability, I respect that! I figured you might like our FB community as there’s typically a lot,of,responses there! But I love that you’re responding on WP! Comments help us, big time, so I appreciate what you’re doing for us, big time! Check out our FB and you’ll see that we’re hosting a viewing party for the MNF season opener against the Saints. It’s gonna be amazing and it’s free, if you’re able to attend let me know and I’ll put you on the list!

Nothing would make me happier. Me and my little family would LOVE attending, unfortunately I reside far to far away, in the lonely state of DELAWARE. A place practically void of Vikings fans, which is a big reason I appreciate you reaching out today. Don’t know you, but your obviously a class act and I will visit PTSD-FB often . It appears to be right up my ally. Good luck with this gutsy endeavor. If I can help in any way, please contact me via FB or right here. TY JJ

Can do, thanks Todd! You’re a great guy and your words really do make me feel like I’m doing the right thing by going for it with this sitE!