Expect the Kirk Cousins to Steelers Rumors to Intensify 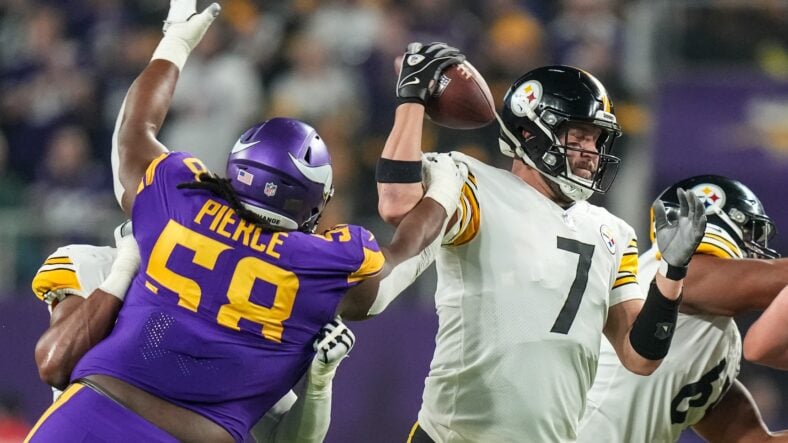 As the 2021 season (mercifully) approaches its conclusion, writers and fans have begun turning their attention toward the offseason. One of the preeminent areas of debate within Vikings Land is what to do with the well-compensated QB1. Sean Mannion is merely a short-term QB2; Kellen Mond has been a disappointment as a rookie. In some ways, then, Kirk Cousins is as important as ever, and yet the reality remains that 2021 will end in a whimper, leading to some Steelers speculation.

Take a look at this video from November:

The Steelers, it would seem, will be looking for a solution at QB.

Earlier, Ben Rorthlisberger said that this past weekend’s game will likely be his last at Heinz Field:

“But looking at the bigger picture, I would say that all signs are pointing to this could be it. Regular season, that is — I know we still have a chance to potentially get a playoff game there if things fall our way and we take care of business and things have to happen. But in the grand scheme of things, in terms of regular season, signs are pointing that way, this could be it.”

Pittsburgh is a proud franchise. They’ve won 6 Super Bowls. They’re incredibly steady and consistent, as evidenced by their three head coaches since 1969: Chuck Noll, Bill Cowher, and Mike Tomlin. Bottoming out for a complete rebuild isn’t desirable for any team, especially one as impressive as Pittsburgh.

The Kirk Cousins to the Steelers trade speculation therefore has some plausibility. The Vikings, quite evidently, aren’t going to accomplish much in 2021. As I’ve often said, being unable succeed in the present moment means it’s time to start looking toward future success. Part of what makes the NFL so special is that it’s a hope machine. Being dreadful now doesn’t disqualify being remarkable in the future. It’s that (sometimes delusional) hope that keeps fans coming back.

Previously, PFF suggested Pittsburgh would send over a 1st and a 2nd in a Cousins trade. Partnering that kind of draft capital – or something similar – with the $35 million in cap space would allow Minnesota to shuffle things.

The issue, of course, is who will be getting the snaps at QB. Unless something dramatic happens, Mond won’t be ready. There is always the long shot candidates like Russell Wilson, Matt Ryan, or even Aaron “The Toe” Rodgers. Less accomplished QBs like Gardner Minshew, Tyler Huntley, or Drew Lock might also be options to consider.

One has to think that Minnesota is a desirable spot for a QB to play. Dalvin Cook is in the backfield, and Justin Jefferson is continually open. Brian O’Neill and Christian Darrisaw look like they’ll be a strong tackle tandem for years. If the team does land one of the top coaching candidates, Minnesota will be even more attractive.

There is still a lot that needs to be determined, though the first domino has fallen: the Vikings will again not be playing in the postseason. We’ll soon find out what that means for the game’s most important position.