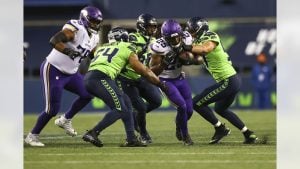 Week 3 was a massive victory for the Vikings. Beating Seattle in their home opener was a must after starting 0-2, but something else became very clear as the game wore on: Alexander Mattison deserves a bigger role in the offense. Going into this past weekend, Mattison had been essentially irrelevant in the Vikings backfield. He had just six touches compared to Dalvin Cook’s 50 in the first two games.

During week two’s loss in Arizona, Cook got pretty banged up. He suffered an ankle injury late in the game, and it held him out of the Seattle game. With the Vikings, for all intents and purposes, in must-win mode, they were forced to hand the reins to their backup RB, Mattison, once again. As a response to the challenge, the third-year back just went out and had a career game. He totaled 171 yards from scrimmage on a whopping 32 touches in Minnesota’s 30-17 win.

His effectiveness on the ground wasn’t entirely unexpected; he had a similarly great performance last year against Seattle. However, his emergence as a receiver (six catches for 59 yards) was not something we’ve seen much of in his career. While it’s not something I feel comfortable banking on moving forward (Seattle’s defense still isn’t that good), it’s good to know he’s got it in his arsenal.

Despite the potential Mattison has shown, there’s always the elephant in the room that is Dalvin Cook’s durability. Cook’s absence last weekend was the 24th missed game of his career (including playoffs) since entering the league in 2017. He has been a catalyst for the offense when healthy, but wondering about his status is in the back of our minds whenever he is slow to get up after a run.

Cook was as healthy as he’s ever been in 2020, carrying 312 times, but how long will that luck last? It seems more likely for a heavy-usage back to wear down over time rather than get healthier. The only player that seems to be immune to this has been Derrick Henry, but he’s built more like an EDGE than a RB.

When you also take into account that the Vikings just signed the star to a four-year extension in 2020, it makes a ton of sense to do anything they can to preserve his health. Because of that, why not at least experiment with a more dual-back scheme? When you look at teams like the Cleveland Browns, they’ve employed this strategy with Nick Chubb and Kareem Hunt to great success.

The Possibilities for a Cook/Mattison Duo

Of course, Mattison probably isn’t a top-10 running back like Chubb and Hunt are, but he certainly seems ready to play a larger role in the offense. It makes even more sense when you look at how compatible Cook and Mattison are. Cook has always been a very elusive player. Mattison on the other hand uses power and speed to burst through holes in the trenches. Mattison can be used to ground and pound while Cook shakes and bakes, limiting the amount of big hits the older back takes.

In addition to the differing running styles, Cook has been a very fluent receiver throughout his career. As aforementioned, Mattison was used quite often as a receiver last week, but I think this was more a matter of circumstance. I don’t think that’s how to use him moving forward. However, he can still be used on passing downs. Throughout his collegiate career at Boise State and even into the NFL, he has been a capable pass blocker.

It’s worth mentioning that while the duo of Cook/Mattison probably can’t be as effective as Chubb/Hunt, it might not be as far off as some may think. Of course, Mattison’s touches have been limited, but thus far in 2021, he’s been equally as efficient as Indy’s Jonathan Taylor. Per NFL’s Next Gen Stats, his average RYOE (rushing yards over expected) per attempt is 0.37 while Taylor’s is 0.39. Cook also sits at 0.41.

In 2020, Mattison’s ROE% was also 10th in the league at 43.2%. Again, only 96 carries, but it’s still impressive company to be in as he was equal with Dallas’ Ezekiel Elliott. Cook was fifth in the NFL at 45.2%, making Minnesota one of two teams to have a duo of backs in the top 10 (Baltimore’s Gus Edwards/J.K. Dobbins). In the end, Mattison has proven to be one of the most efficient RBs in the NFL in the chances he’s gotten. Is it real? The only real way to find out is by making him more involved.