Draft Day Trades: When Are They Good? 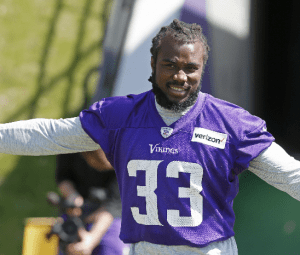 Photo Courtesy of The Star Tribune

Amidst the classic draft season cocktail of evaluation arguments, philosophical debates and cold take montages, there is a forgotten aspect of draft day previewing. Draft day trades are seen as too complex to mock, but similarly so easy to perform that fans can see their teams perfectly positioning themselves to maximize their value. But it takes two to tango and often, one is getting worked.

But trading up and trading down can create an interesting philosophical debate. Is it better to diversify across many picks, or put all your eggs in one presumably reliable basket? What spurs on draft day trades, and how can we define them as good and bad?

Luckily, there’s been a lot of work done to define the value of each draft position. Obviously these are averages, and each trade is its own unique beast, but this is a good place to start. Back in the day, Jimmy Johnson wrote some arbitrary numbers on a the back of an Outback Steakhouse kids menu and it became industry standard. While these numbers aren’t really rooted in reality, the logic behind them led to much more sound investigation.

In 2011, a Harvard study sought to find a more accurate measure of the average value of draft picks. Not too long after, Chase Stewart at Football Perspective updated that guide further. We’ll use Chase’s guide for this, and immediately, we can see some patterns and relationships to exploit when trading. For example, teams trading back almost always get the better end of the deal, because coaches were steeped in Jimmy Johnson’s miscalibrated philosophies.

By the way, “approximate value” is a way of approximating a player’s contribution to their team. You can read about it here, but roughly, an average team has about 100 points of credit to split up amongst its players per season. Better teams have more credit, worse teams have less. Add up a player’s credit and you get their career AV. 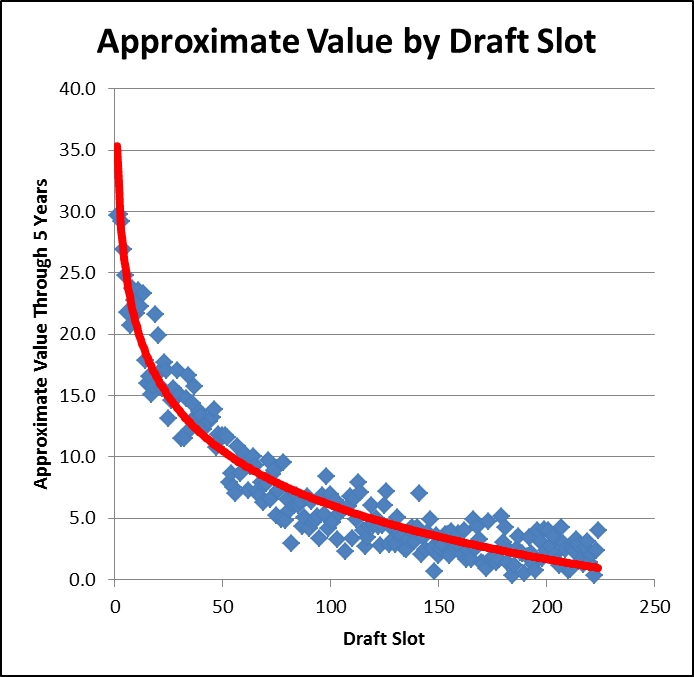 After about pick 150, things flatten out a lot. The average players only offer a point or two of AV. For reference, five-year long snapper Kevin McDermott has accumulated four points of AV over his career. Moving, say, a 7th up to a 5th has a minimal return. Those players matter, but not necessarily more or less than those drafted on either side of them. Which leads us to our first conclusion:

Quantity over quality in the late rounds.

On the whole, moving from 1.0 AV to 1.2 pales in comparison to splitting that 1.0 into two 0.8s. Perhaps you’re trading up because you’ve correctly identified the next Stefon Diggs, but teams aren’t nearly good enough at draft evaluation to justify that much confidence. Like stock traders, we want to diversify our assets.

When evaluating trades back, there’s a massive difference between trades that acquire new wholesale picks and trades that simply shift trades around. Even drastic shifts in the late rounds have minimal effects, but additional physical players has more tangible value.

This, of course, assumes a perfect draft order. That is, the best player going 1st overall, the 2nd best player going 2nd overall, and so on. Of course, since teams constantly miss on evaluations, this isn’t the way things shake out. Assuming perfect evaluation, the best way to win the draft is to take the best player available – if even one team in front of you messed up, you’re getting a better player than you should expect from your position. Before you start frothing at the mouth, need would inform the way teams evaluate these players as well.

Searching out the “steals” is a great draft day talker. If you’re right about a player everyone else missed on, you can get value in rounds where everyone else is drafting camp bodies. Which leads us to our second conclusion:

Evaluate draft trades with the players, not the picks.

This isn’t to suggest waiting for hindsight – any draft day moves must be evaluated with an eye toward the knowledge teams had at the time (nobody could have guessed that a Malik McDowell would sustain a career-threatening ATV accident). But acquiring players that outperform their “price” has value. You could sit at pick 65 and get the 65th best player, or you could trade up to 60 and get the 40th best player who’s slipping. That team might trade more than what pick 60 is worth to get that opportunity, and be happy. After the draft, I’ll be looking at each team’s starting capital, and who they acquired with those picks as ranked by the draft community to further evaluate this. Stay tuned!

So how can this be exploited the other way? If teams are trading up for skidding superstars, who is passing those same players up? Put simply, a team that disagrees about that skidding player. Finding teams with drastically higher evaluations than you can create profitable situations. You may be trading from the 60th best player to the 65th, but if the price is right, it’ll be an overall profit. A way to ensure the price is right is to find a team that thinks the 40th best player is falling, and is willing to trade as if they’re trading up to 40. Put another way:

Be the trade partner of a team with a crush.

When the 49ers fall in love it CJ Beathard, or the Dolphins fall in love with Leonte Carroo, they’re probably willing to pay more for the opportunity to pick those players to than you’re getting with any other use of that pick. Very few 104th picks will offer more than Jaleel Johnson plus Stacey Coley over the course of their careers.

In a more high profile way, teams that don’t have quarterback needs have an advantage over teams that do. The Jets were probably willing to pay anything for a chance at their QB of the future. The sum of what the Colts get with the 4 picks they got in return, however, is likely to outweigh what they had gotten if that stuck around at the 3rd overall pick. Indianapolis may even get the same player they wanted anyways.

Thinking smartly about draft day trades can put any team at a distinct advantage. We often analyze and discuss the valuation of drafted players, but there are underlying strategies that get lost in the weeds. There’s a difference between the evaluation of a player and the process that ended up landing that player. Keep that in mind when critiquing your favorite team’s draft day activity.