The Minnesota Vikings found an absolute diamond in the rough in Hunter, and they may have done the same thing this year with newly drafted rookie DJ Wonnum. Wonnum, who played for the South Carolina gamecocks, was a four year starter in college.

Over those four seasons, he recorded 14 sacks, 29.5 tackles for loss, and 137 total tackles (77 solo, 60 assisted). At 6’5” and 258 lbs, Wonnum is pretty similarly built to Hunter when he came out of school. They have the same size hands and near identical wing spans.

Their scouting reports are somewhat similar too. Both were not considered to have an excellent first step in college. Hunter was praised for his motor in college, and Wonnum’s best trait has been his effort. Wonnum’s technique and use of counters has been criticized heavily, and Hunter was much the same way in college.

Now, I’m not saying Wonnum is Hunter. Wonnum has significantly less athleticism. Hunter ran a 4.57 40 yard dash and has seemingly only gotten faster with the years. Wonnum was a couple seconds slower in his 40 time, at 4.73. He also isn’t as strong as Hunter, having only put up 20 reps on the bench to Hunter’s 25.

However, I still think he fits the mould laid out by Andre Patterson and Mike Zimmer for their defensive ends. He’s got great length, his speed is adequate, and give him a year in the Vikings nutrition and training program and he’ll have muscle on muscle.

With the departure, at least for now, of long-time defensive end Everson Griffen, the Vikings have an opening in their defensive line. Sure, that hole will for now be filled by standout backup Ifeadi Odenigbo, but Wonnum should get his chance in the next couple seasons.

If he keeps putting in the work, and being a sponge of Hunter’s knowledge, he could be the long-term solution at the defensive end spot opposite Danielle. At only 22-years-old, he’s already a few years behind Hunter when he started, but he’s got time and opportunity with one of the greatest defensive line coaches in the NFL. 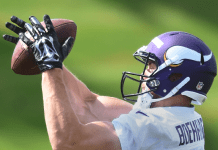